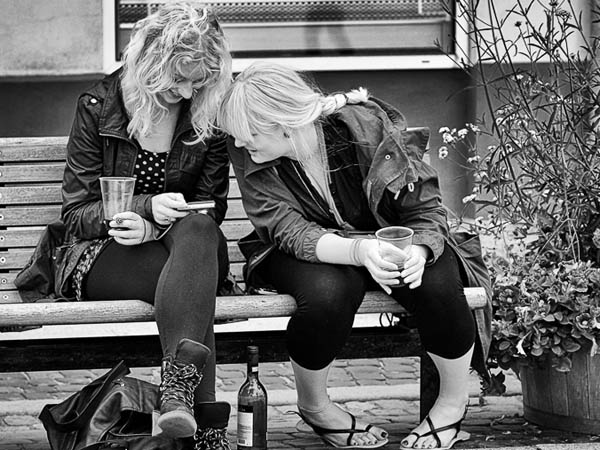 All the modern rules that come with dating can make a girl long for the simpler times of telegrams, carrier pigeons and love letters.

But fast-forward to today and for our generation, texting is a staple in the world of dating and flirtatious communication.

According to a recent survey, for over half of Australians under the age of 35, text messaging is the main form of contact after a first date.

However, with this method of communication comes a set of unspoken rules, where each texter and textee must blindly negotiate through the do’s and don’ts of dating in the digital age.

Therefore, our approach and tactics towards dating have to change along with it.

There have been several iPhone apps created, including Text Her This, to aid those who don’t yet know the rules of romantic texting.

The first stumbling block of this is that many people assume because it is a text message, the construction of plain English sentences need not apply. But, this is not the case.

A UK-based study by Match.com found that abbreviations and acronyms such as ‘LOL’, ‘Gr8’ and ‘LMAO’ are turn offs and are likely to prevent a second date. It is better just to text in natural English to avoid sounding like a pre-pubescant teen. 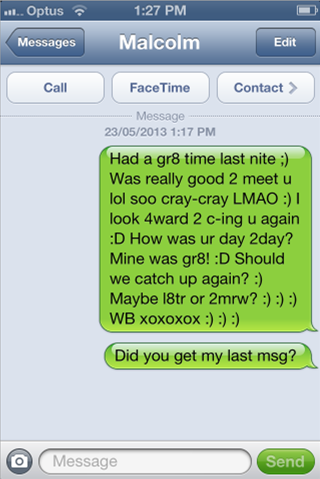 The length of the message also needs to be considered. It’s a SMS, not a novel, so try to keep the length within reason. This works both ways, with short ‘one-word’ messages also not faring well for potential suitors.

Although this is all relative, it’s also important to consider the length of the messages that the other person is replying with.

“I usually just try and mirror the size of the message a guy sends me,” says Melbourne serial dater, Melissa Wilks.

Emoticons are great for conveying tone and emotion, but should be used strictly in moderation. One ‘smiley-face’ per message will more than suffice.

Women are generally more guilty of this kind of sin. According to a U.S study from Rice University conducted last year, women are twice as likely to use emoticons in text messages. So, step away from that ‘winky-face’ unless it’s really necessary.

With texting comes game playing, but we must try to not fall victim to this kind of trickery.

The Wall Street Journal were the first to coin the term bluffting – this is a text message that involves a bit of ‘bluffing’ and manipulation.

This can range from sending an apparent ‘drunk text’ while completely sober simply to gauge a reaction, or the most common use of bluffting – responding to a message with “sorry, who is this?” to appear aloof and uninterested.

Either option is highly dangerous as well as seemingly desperate.

But it is the waiting time between messages that seems to stir the most division in the text-dating debate.

A Telstra study of Australians found that 42 per cent of texters delayed responses to appear uninterested.

While fifteen minutes is usually the minimum amount of time left before responding, some experts suggest going even more extreme.

Sherrie Schneider and Ellen Fein have written a book on dating in today’s society.

In their ‘dating bible’, The Rules they say response time depends on your age group.

“Wait a minimum of four hours before responding to a text message – and that’s only allowed if you’re in your 20s. If you’re 30-something, waiting at least half a day won’t hurt.”

Again, it is all relative and keeping a similar time gap with the one your texting is advised.

However, never double message, especially not to ask if they received your last text. Unless you want the ‘super keen’ label for the rest of your dating days.

In closing your text, even the final syllables, the kisses and hugs, are an issue of hot contention.

Many men believe the hugs to kisses ratio needs to include more kisses to remain out of the ‘friend zone’. Some even go as far as avoiding digital hugs altogether to keep their romantic intentions blatantly obvious.

Whether this is an effective strategy in the dating game is still unknown.

What is certain is that politics of modern dating have turned the humble text message, a simple few bytes of information, into a painfully crafted masterpiece.