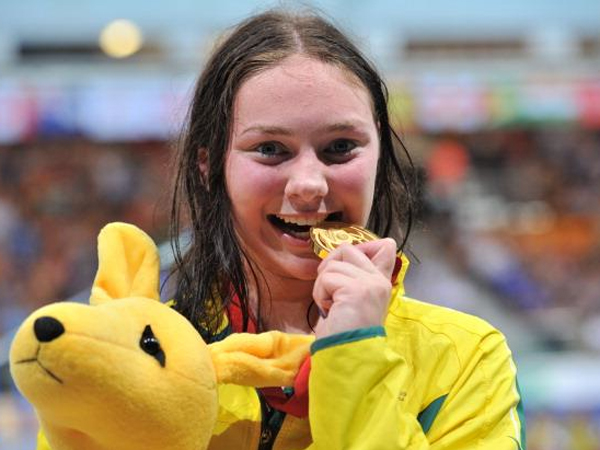 Elliott held off Englishwoman Stephanie Slater in the final lap of the 100m S8 freestyle to break the two-year record and record her first Commonwealth gold.

In taking out the Glasgow title, Elliott confirmed her standing as the world’s best following her world championship win in the event last August.

Elliot’s win highlighted another strong night by Australia in the pool. In the 200m freestyle, Thomas Fraser-Holmes improved on his bronze medal at Delhi 2010 with a come-from-behind win over teammate Cameron McEvoy.

McEvoy lead at every turn only to fatigue in the final fifty metres. Fellow Australian David McKeon could have locked out the podium if not for fast-finishing Welshman Calum Jarvis, who pipped McKeon for bronze by two-tenths.

In the final event of the night, relay coach Brant Best made the unusual move of placing the fastest swimmer James Magnussen in the third leg of the men’s 4 x 100m freestyle.

The surprise move paid off as Magnussen, the 100m freestyle world champion, reeled in a 0.74 second gap to South Africa and set up last leg McEvoy to deliver gold. The win was the first gold since the 2011 world championships for the much-maligned relay team, following the infamous Stilnox issue at the London Olympics.

Leiston Pickett also collected gold for her win in the women’s 50m breaststroke.

On the track, Jack Bobridge continued his domination of the individual pursuit by defending his Commonwealth title and easily beating countryman and current world champion Alex Edmondson.

Bobridge (4:19.650), who missed February’s world titles due to his road racing contract at Team Blanco, started slowly before finding a rhythm Edmondson (4:24.620) could not match.

Edmondson’s sister, Annette, also collected silver in the individual pursuit, unable to reel in world champion Joanna Rowsell of England in the gold medal match. Annette’s roommate Amy Cure made sure she will not go home empty-handed, taking out the bronze medal match.

Australia’s first shooting gold medal of the Games went to debutant Laura Coles in a dominant performance in the women’s skeet.

The Kookaburras kicked off their first tournament since June’s world cup triumph with a 9-0 thumping of Wales.

Australia’s mixed badminton of He Tian Tang and had mixed results and were unable to back up their 5-0 morning win over the Falkland Islands, going down in afternoon play against Canada 3-2.

A tight medal tally at the end of day 2. #Glasgow2014 pic.twitter.com/b4YjtopPPs