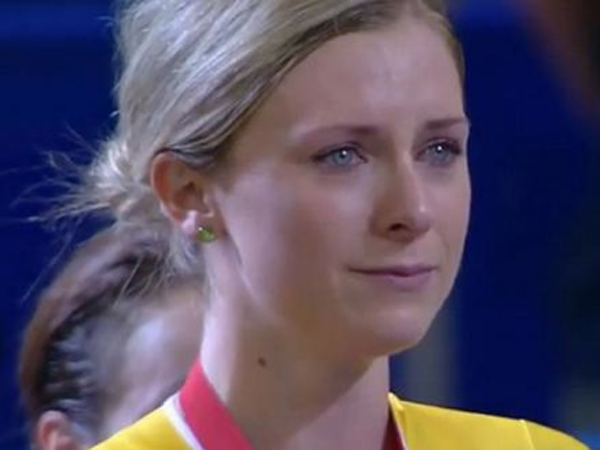 Annette Edmondson was overcome with emotion as she received her first gold medal in Australian colours following her win in the women’s 10km scratch race.

Having won ten medals at Olympic, world and Commonwealth level but never striking gold, the 22-year-old South Australian had tears in her eyes as she stood atop the dais. Teammate Amy Cure joined Edmondson on the podium, collecting silver for her effort in the sprint finish.

“(I have) always been the bridesmaid so this is really a special moment for me,” said Edmondson, still in tears following the medal ceremony. “To see your flag rise for your country is very special.”

Edmondson, a national junior sprint champion before switching to endurance four years ago, was the beneficiary of a strong and commanding lead-out by Cure that started two-and-a-half laps from the finish.

“We have a really strong team. Mel (Hoskins) was covering all the moves out there. She did an amazing job for the team. I’m glad I could help Nettie out,” said Cure. “We could not have done it without each other.”

Tears at 10km scratch ceremony for gold medallist @NettieEdmo 'Always been bridesmaid so this is really special' pic.twitter.com/fpWgGk3syC

Scott Sunderland defended his 1km time trial title from Delhi 2010, posting a time of one minute 00.675 seconds. Sunderland’s power endurance was the deciding factor with a final lap of 14.715 seconds moving him past the times of New Zealand pair Simon van Velthooven and Matthew Archibald.

Australia has secured gold and silver in the women’s sprint but which step of the podium Anna Meares and Stephanie Morton occupy will be decided in tonight’s final. The two roommates both needed just two heats in their sprint semi-finals.

The Australian pair of Kieran Modra and Jason Niblett was unable to beat the local Scottish pair in the gold medal match of the men’s tandem sprint B2 and instead settled for silver. Paul Kennedy and Thomas Clark combined for a win in the bronze medal match.

In the men’s points race, Jack Bobridge and Glenn O’Shea finished sixth and seventh, well behind the 98 points of New Zealander Tom Scully.

Daniel Repacholi kept his composure to outlast India’s Prakash Nanjappa and win gold in the men’s 10m air pistol final. Having lasted to the final two, nerves set in and Repacholi’s wayward penultimate shot whittled down his 1.4 point lead. But the 202cm, 134kg truck driver from NSW fired a bullseye for 10.4 and a first individual Commonwealth gold medal.

At the pool, Australia continued its domination of the meet winning another four gold medals from the seven finals on Day Three.

It could have so easily been five if not for England’s Francesca Halsall taking out the women’s 50m freestyle by a fingernail over the Campbell sisters. Cate was just four-hundredths of a second behind Halsall’s 23.96, with younger sister Bronte a further two-tenths behind.

Daniel Fox backed up his world-record morning swim of 1:57.16 with another dominant display in the final of the men’s 200m freestyle S14. Mitchell Kilduff was just edged out for bronze.

Talyor McKeown and Sally Hunter finished one and two in the final of the 200m breaststroke.

The successful night was rounded out by a third relay gold to Australia as the quartet of Emily McKeon, Alicia Coutts, Brittany Elmslie and Bronte Barrett reigned supreme in the 4x200m freestyle.

In the rugby sevens, Australia finished top of Group D after a tight win over England 15-7 in their final group match. The sevens team will play Wales in tonight’s quarter-final.

Australia also defeated England in a pool match at the netball but this win was far more difficult. The Diamonds’ goal shooter Caitlin Bassett broke the deadlock in the final 15 seconds to secure the win 49-48.

And that's how you give @kimberley138 a great 21st birthday present – a nail biting #Glasgow2014 win! #GoAussies

Australia’s lone survivor in the singles of squash, Cameron Pilley, succumbed to Peter Barker of England in their men’s quarter-final 11-8 11-4 11-5.

We like the look of this! Here's how the tally stands at the end of day 3. #Glasgow2014 pic.twitter.com/2wEShVgKTx