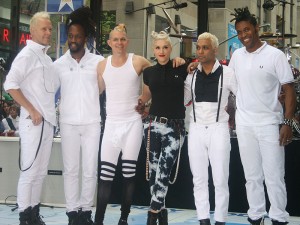 No Doubt failed to live up to expectations after 11 years of studio silence.(BrianTheMute via Wikimedia Commons)

September proved to be one of the most productive months of 2012 as far as music is concerned. Several releases from many different music genres hit iTunes and record shops, leaving no music lover unsatisfied. Here are some of the most popular alternative-rock-pop records that stole the show during the first month of spring.

Judging from their previous album and the projects of Kele Okereke and Russell Lissack, I was expecting an electronic-dance-rock record with the band’s iconic guitar distortion effects left forgotten somewhere in a dusty corner of the studio. However, I was pleasantly surprised after listening to some of the heaviest compositions of a band that has so many things to prove after four years hiatus.

Despite that, the fire seems to burn out after just a few songs, leaving the overall impression rather mixed. I believe that the absence of imaginative riffs and the poor orchestration, makes their effort on this album rather mediocre.

The endoscopy of Kele has offered us some really good lyrics but these are not enough to make this album memorable in the final music lists of the year.

The break for the superstars from Nevada didn’t last long and here they are again with a record worthy of their name and value.

Heavily influenced by Bruce Springsteen, Roxy Music and U2, the quartet decided to recount stories from Nevada and pay tribute to their own studio, naming their album after it. Twelve songs full of feeling and reflections that may lack the dance-rock outbreaks of their debut album but keep the mark of wit and maturity of their previous album Sam’s Town.

In regards to drawbacks, I should mention that sometimes the standard music scales that they use can become tiring and it is not easy to find a Killer’s classic track, but Battle Born is the inevitable album of the band’s evolution.

No Doubt – Push and Shove

Eleven years passed since the sca-pop idols of the ‘90’s released their previous record Rock Steady. After that, largely because  of Gwen Stefani’s solo career, the band went on hiatus until 2008, when they started touring and writing new material.

Now that their new album is finally out, I don’t know how vindicated their fans feel as it really fails to live up to its high expectations.

A little bit of sca, a little bit of electronic mixed with pop elements (of course) left me staring at my iPod waiting and wondering where the Sunday Morning of 2012 is.

What is most disappointing about their return is that, as a group they seem to have lost the fire they once had and now sound more like a studio pop-band rather than the band who once compelled us to dance.

The lofty aspirations of this band-phenomenon seem to have been converted into to smiles of satisfaction. These three young musicians have the ability to translate loneliness, intimacy and love into songs that could accompany you for hours on end.

Dark melodies, deep vocals and post-rock elements along with their indie-pop identity on this album are sure signs of the development of the group. Even if we expected a more synthetic sound, the XX are still minimal in their selections and ready to take you for a trip into their world. You won’t be disappointed.

(Although it is planned to be released in October, ‘Post Break-Up Sex’ was available for streaming on their official webpage during September)

I remember The Vaccines playing to a sold-out live show in London way before the release of their first album. After the release of What did you expect from the Vaccines?, everyone regarded them as the new English indie-rock messiahs and were followed with level of hype that, in hindsight, may not have been totally justifiable.

Their second attempt finds them still rocking. With some surf and rock tunes, this might not be the best record of their career but is an album that could be the precursor of something really big to come out of the group in the near future. Going by the talent they present on this album,  I reckon it will be worth the wait.

The American punk band decided to record and release a trilogy album entitled ‘¡Uno! ,¡Dos! ,¡Tre’ . Away from the concept albums, Green day chose to return once again to the realms of punk.

Unable to break free of the Clash influence, this band offers us songs full of energy and aggression. ¡Uno!  definitely cannot be characterised as a revolutionary album and it lacks the musical exaggerations synonymous with Green Day, but at least these guys are a favor the radical attitude that this music requires. But for me, they will always be the pop version of past punk legends.

The follow up to 2009’s Resistance is definitely their most diverse and controversial album to date.

Widely known for their wide horizon of music style (in their jams they play music from Rage Against The Machine to Rachmaninoff) on this album they have decided to engage with the most current music trends.

Electro pop, dubstep, along with rock genres all shaken and stirred make up The 2nd Law album. Is the cocktail successful? You definitely need to devote more time to this release than to their previous albums to assimilate to it, but in the end don’t become frustrated if you realise that Muse may not be regarded as an alternative rock band for many more years to come.

I should also mention some other releases that attracted some attention from media and audience.

The Presets – Pacifica: The Australian electronic duo returns with a record that sounds like a futuristic blend of past and present electronic heroes.

John Frusiante – PBX Funicular Intaglio Zone: The seventh step of the ex-guitarist of the Red Hot Chilli Peppers is a sincere collection of songs similar to his previous works. No further surprises.

Hoobastank – Fight or Flight: Rather dazzling and boring, Hoobastank’s new record is another tribute to mediocrity.

NOFX – Self Entitled: No matter if they are close to complete 30 years of pure punk tunes, NOFX don’t lack the power to give us an album full of nonconformist and tragicomic tunes.

I know that many will be disappointed for not including their favourite band but the list is endless. In the final analysis, September can be characterized by the plethora of new music releases by the big alternative-rock-pop names although many of them lacked the expecting quality.