I remember the first time I saw the Fell In Love With A Girl video clip. It was way back in 2001, when the charts were being dominated by such class acts as Limp Bizkit, Creed, Coldplay and (gulp) Nickelback. As a girl who had grown up with the Britpop revolution, producing excellent acts such as Pulp, Suede and the untouchable Radiohead, I had started thinking that that was that – good music had made its dash. It was over. With the radio constantly bombarding me with shit, I felt like I had become my dad as I started espousing the virtues of ‘old’ music from the ‘90s, and how kids these days had no idea. I was thinking I should be on the lookout for a pair of comfy slippers and the perfect cup of tea. 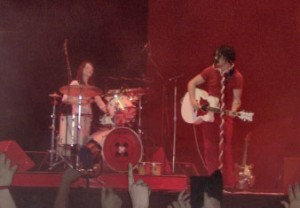 And then the revolution I was wanting so badly happened. For me, it started with that video clip, Lego people dashing about wildly over 2D backgrounds with a squawking, raspy lead singer plaintively screaming about how he had ‘fell in love with a girl’ over dirty three-chord electric guitar and a basic-as-fuck metronome drum. It sounded like it was recorded in someone’s garage. Along with trailblazers The Strokes and The Libertines, The White Stripes had brought the world the post-punk revival of garage rock. And the rock god saw that it was good.

Unlike The Strokes, who made one excellent, genre-defining album then went on to produce utter shit (and lots of it), or The Libertines, whose musical genius was enveloped by infighting and the drug-fuelled antics of one Mr Peter Doherty, The White Stripes were consistent, reliable and oh so very cute. The brother-and-sister act of Jack and Meg White (actually a divorced couple, and if you didn’t know that, then congratulations on arising from your coma, it’s 2011 now, there’s this thing called iPhones and we’re ruled by a ginger) gave us three-minute stripped-back songs, an amalgamation of punk and blues that was one part Gun Club, one part The Stooges and one part The Kinks, all wrapped up in a retro, fashion-conscious aesthetic.

Their reliability consisted of a pretty good output of six studio albums over their career. One could argue that Jack White has gone on to a more mature and refined sound with his projects The Raconteurs and The Dead Weather. But where The Raconteurs and The Dead Weather give us sepia-toned, adult blues, The White Stripes come screaming out of the speakers in red-and-white candy-striped spikes full of childlike exhilaration.

Their debut self-titled album features an impossibly young-looking Jack and Meg leaning against a red wall, with Meg a full three months into her drumming career.  Follow-up De Stihl contains cover Death Letter, which is the favourite of fellow Detroit icon Iggy Pop. But it’s with their third album, 2001’s White Blood Cells, that The White Stripes really hit their stride. From the crunchy, haunting opener Dead Leaves And The Dirty Ground to ‘60s closer This Protector, the album takes you on a journey through the carefree abandon of cowpunk good-timer Hotel Yorba, the desolate ballad Same Boy You’ve Always Known and the in-your-face aggression of I Think I Smell A Rat. It’s a love letter to the electric guitar, to the lo-fidelity raw sound and to the fundamental exuberance that symbolised The White Stripes. When I first bought the CD (no downloading in those days folks) I played it nonstop about eighteen times that first day, and had it on constant rotation the following weeks. I bought it as a birthday present for everyone I knew that year (and cared about enough to fork out for). It wasn’t until The Libertines released Up The Bracket the following year that I found an album that could top it (and I am yet to find an album that can top that wee beauty).

Follow-up Elephant was the album that made the world sit up and take notice, containing the ubiquitous Seven Nation Army, today still the perennial favourite of sports stadiums anywhere. It’s a cracking album, but perhaps the fuss went to Jackie’s head, because their next album, Get Behind Me Satan, was a remarkable drop in form. Haters gonna hate, but substituting the electric guitar for piano and pussy-arsed mandolin was not a good move. But then this was also the time that Jack went through his loony phase of wearing a cape and sporting that evil-genius ‘stache, so… who knows. I’m going with too much coke.

Sixth-and-last studio album Icky Thump was a return to form, especially with that killer title track. All their studio albums also featured at least one cover, and covers are something The White Stripes did extremely well – the naked vocals and soft guitar in Dolly Parton’s Jolene are unforgettable, as is the sparse but torrential drumming and the tale told in Bob Dylan’s One More Cup Of Coffee For The Road. And of course let’s not forget evergreen crowd favourite I Just Don’t Know What To Do With Myself by Burt Bacharach.

Critics say that the gimmicky nature of The White Stripes – the brother-and-sister act, the red/white/black fashion aesthetic – was the real reason for their fame, a band that was benefitted by their surroundings, a band in the right place at the right time. It’s true that The White Stripes’ sound is simple, pared back and lyrically uncomplicated. It’s true that their fans were obsessed by the are-they-or-aren’t-they marriage rumours. And it’s true that they came around at the right time.  But it’s because they came around at this time that I hold them in such high regard – not only did they cut through the inane try-hard rock of Limp Bizkit or the poncy overblown shit Coldplay saw fit to vomit upon us, but they were also trailblazers, the first wave of garage revival paving the way for other excellent acts to take over the world (Yeah Yeah Yeahs, Kings Of Leon, The Black Keys et al).

And there’s the music. It’s simple, it’s honest, it’s excellent. It’s not the overproduced wank favoured by blowhard acts trying to disguise the fact they’re actually shit. It’s loud. It’s heavy. It’s an electric overload pumped ever on by that metronome drum and wailed upon by that screeching lead vocal. It’s music that tells the stories of unrequited love, of loss, of death, of murky happenings going on down by the river, in alleyways, in the back seats of cars. It’s rock ‘n’ roll, godammit.

The White Stripes came, they saw, they conquered. They were two kids from Detroit who rocked the roof off the world. Though they’ve laid low these past couple of years, there was always the expectation they’d come back together eventually and birth another gem of quality rock. It’s sad that they’ve called it a day, but after 13 years together you can’t deny they’ve had a good run.

Long after their peers had broken up or lost relevance, they were still flying the flag for first-rate rock ‘n’ roll. And now that they’re gone? Well. I just don’t know what to do with myself. Perhaps I’ll chuck on The Dead Weather a bit more, after all it’s none too shabby. But I think what I really want to do is go hang out with my nephew. He loves me playing Hotel Yorba on my crappy acoustic. Plus, he’s got Lego.

Renee Tibbs is studying the Master of Global Communications at La Trobe, and is the current editor of upstart.