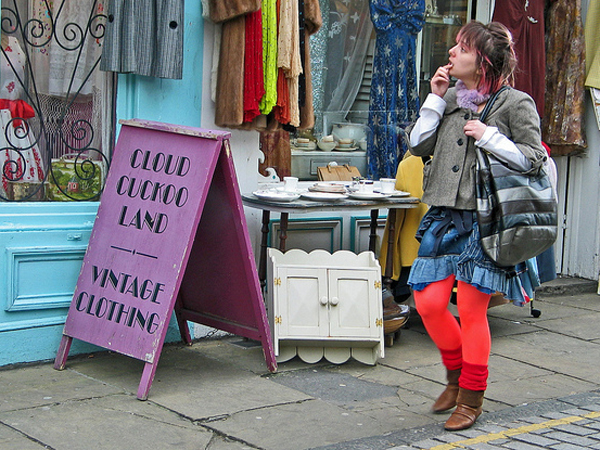 I like to think of myself as a kind of designer vintage shopping guru.

I may not have a degree or any kind of qualification but I do have sparkly gold turban and one amazing story many thrift shop devotees would struggle to rival.

I was shopping at my friendly neighbourhood Savers in late 2011, when I spotted a nice looking nude tweed skirt amongst the drips and drabs of other op shop rejects. As I moved closer, I was surprised by its far superior quality to the common range.

My hopes were exceedingly high and I thought I might just try it on.

With my new find in hand I traveled to the change rooms. While the skirt appeared two sizes too small, that is rarely a stumbling block for me, I pulled, yanked and shimmied my way into it, but to no avail.

The skirt would not fit. I had failed dismally.

I tragically put it back on the hanger prepared to say my goodbyes, but then I took a quick glance at the label. Were my eyes deceiving me? Had I entered a bizarre dimension? Was I secretly granted a wish on my way in by a genie that was parading around as a Savers sales assistant?

After pinching myself several times, I accepted the most magical sight I was seeing before me. A skirt with the label — Gucci.

Okay, calm down I told myself, what about the price? Silly old me had gotten prematurely excited, surely it would be above my spending limit, which is usually a generous ten dollars.

Was it sixty, one-hundred, six-hundred? No, it was six dollars. I do not lie. I bought it and it was the best thing I’ve ever purchased and will ever purchase I expect.

Those were the good old days.

Times have changed. Vintage shopping is becoming too popular. According to Ibis World the number of people shopping in second-hand charity shops such as Vinnies, the Smith Family and the Salvation Army has increased by 9.1 per cent over the past five years, with revenues in 2012 amounting to $256 million.

As vintage fashion has increased in popularity, the likelihood of finding an affordable designer piece in a humble old op-shop has decreased. Charity shops are now being raided by high-priced vintage stores, to the point where it is extremely rare to find anything decent at all.

Stores such as Hunter Gatherer, The Brotherhood of St Laurence and the Red Cross’s specialty vintage stores are sourcing the quality vintage stock from their other stores and selling them at vintage prices. This generally adds a zero or two.

Popular urban areas are ironically the worst. Despite being in a wealthy community, all the good designer pieces are snapped up in a second by the surrounding vintage boutiques.

This trend is even coming from within, with some op shops creating special ‘vintage’ sections where prices are inflated to meet the standards of typical vintage pricing.

With op shops being robbed of everything on-trend, there’s a need to explore other avenues to find good vintage items. The Internet has an unimaginable amount of e-boutiques as well as vintage selling sites such as Bowerbird Vintage. Affordable designer vintage can also be found on websites such as Etsy and eBay.

According to the Herald Sun, “eBay has reported 20 per cent growth in people selling and buying used clothing, shoes and accessories in Australia.”

The sparkly gold turban I mentioned earlier happened to be Christian Dior, a very surprising and exciting steal from eBay for a mere twenty dollars.

Markets are another go-to place for shoppers seeking fairly priced vintage luxury. The Camberwell Market in particular, has a wide range of vintage items sold by weekly stall holders.

It looks like us innocent shoppers that are just trying to ‘pop some tags’ in op shops need to expand our horizons. We can’t let all the fancy boutiques get their paws on all of the good stuff first, leaving us behind with hideous leg warmers and old grandpa slacks.

Nonetheless, the chance of finding another designer brand in a thrift shop is pretty unrealistic.

Until then I will have to keep waiting for my next find of a lifetime, which I will be clenching as tightly as my Gucci skirt and never letting go.