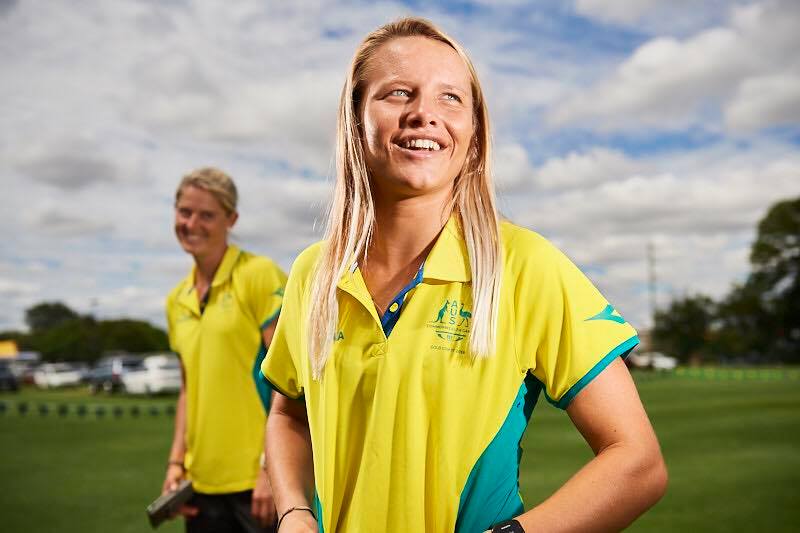 Performing at the highest level as a professional athlete can be stressful enough.

Combine that lifestyle with undertaking a university degree and you start to understand the enormity of it all, but for the Hockeyroos’ youngest team-member, it’s an opportunity not a challenge.

A typical day starts with an early rise, followed by arduous training sessions and ending with late-night university readings.

This is the reality for 20-year-old Hockeyroo player, Madi Ratcliffe.

Currently studying a Bachelor of Commerce at Deakin University, Ratcliffe recently embarked on her first major international tournament on home soil – the Commonwealth Games held on the Gold Coast.

Despite falling agonisingly short of gold at the hands of rival New Zealand, the youngest squad member featured in every game on the Gold Coast – as well as the gold medal match.

Since her first game with the Hockeyroos in 2016, Ratcliffe has notched up over 30 appearances in the green and gold, a testament to her hard-work.

So what is her secret to balancing her ongoing university studies with the rigours of training and playing at the elite level? Ratcliffe puts it down to three key components.

“I think it just comes down to time management, enthusiasm and prioritising,” Ratcliffe told upstart.

“There are times when hockey is so overwhelmingly busy that I forget I’m even at university, however there’s also periods of really high motivation where I’m also eager to learn.

“I think it’s so important to have something to fall back on or look forward to after sport, I’m a huge advocate for keeping yourself busy with study or work.”

Hard work and determination is not foreign to Ratcliffe, who acknowledged “juggling studies and professional sport requires a lot of motivation.”

Throughout her teenage years Ratcliffe would travel more than three-hours to Melbourne, often leaving school after midday to make sure she never missed a training session.

Her apparent focus on achieving success was evident with her exceptional VCE scores, despite the tough task of managing her studies whilst she rose in state hockey ranks.

“It all kind of evens out in the end if you put the time and effort in and remind yourself of the end goal,” Ratcliffe said.

Her commitment did pay off – making state teams year after year as a youngster – something that flowed through with her selection to the Commonwealth Games.

“I think first there was relief,” Ratcliffe highlighted.

“I felt a lot of pressure to be picked and it was a really stressful training period in the lead up. Then obviously, I was just stoked with pure excitement and happiness.”

Growing up, Ratcliffe tested her natural sporting ability by playing tennis, however, the one sport which rivalled her love for hockey, was surfing.

“I played every sport available, especially a lot of competitive tennis until I was about 13, but my main other sport was surfing,” she said.

“I was a late bloomer and didn’t really start winning high level competitions until about age 15 and I had a few sponsors under my belt, [but] if things worked out differently I could have gone down that path instead of hockey.”

Ratcliffe still enjoys catching the occasional wave when she can, but severely injuring her ankle in the water sidelined her for two months of the hockey season – more importantly missing the Junior World Cup in Chile.

That hiccup in 2016 was a silver lining moment for Ratcliffe, putting life into perspective after receiving criticism for her choice to surf, which could have jeopardised her hockey career.

“I smashed out some more university subjects in my absence, and I rediscovered not only my love but my needing for competitive sport,” she said.

Since that setback, Ratcliffe has recovered extremely well to now be a permanent member in the national side. With the bitter end to her first major tournament now behind her, the young gun is satisfied no matter what the future may have in store.

“If both my mind and my body permits, I’d love to still be playing hockey for Australia, although I am content in knowing that if that isn’t the case, I’m more than just a hockey player,” Ratcliffe said.

Aydin Payne is a third-year Bachelor of Media and Communications (Sport Journalism) student at La Trobe University and staff writer for upstart. You can follow him on Twitter @Aydin Payne