We hear about the mental health of players, but what about the officials? 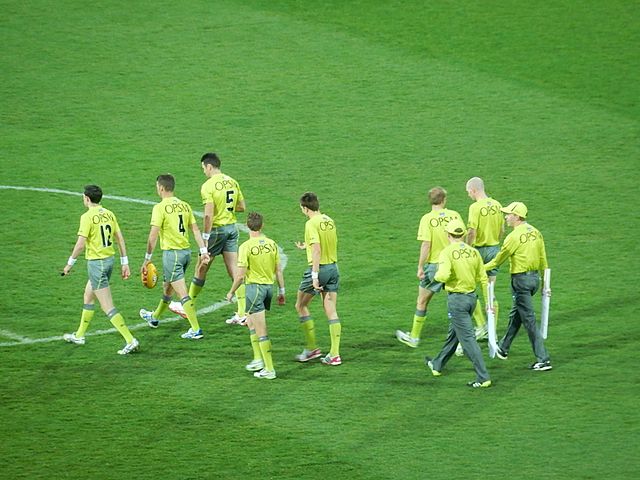 The increased awareness of mental health issues in society has prompted athletes of all levels to begin talking about their own mental health experiences. However, we don’t hear as much from sporting officials. In each sport, it’s the referees or umpires who are regularly criticised and abused for their decision-making. So, how is their mental health?

“There have been a few instances over the years that have been really bad, mainly to do with coaches or parents of younger teams with junior umpires,” she told upstart.

“Verbal abuse is a big one. I’ve had a few run-ins with coaches who have been really awful all game and then come to shake my hand at the end of the game, as though I haven’t just been on the receiving end of their screaming all match.”

Taylor says that although her mental health hadn’t been significantly affected by these incidents, she had seen other umpires face mental health issues as a result of officiating.

“I think the main issue I’ve seen is pressure and anxiety to do the right thing by the coaches,  because if an umpire doesn’t make the right call, there’s a big chance they’ll get yelled at and presumed to be incorrect for the rest of the match,” she said.

“A lot of umpires are very good at putting on a straight face on court because it’s the only way they can protect themselves from the abuse, while a lot of umpires actually bond and stick together because of it.

“Stress can also be an issue before games because you may sometimes go into a game knowing that a particular player or coach will target you. It can really affect how you go into a match.”

As an umpire at a local level, Taylor wasn’t aware of any access to mental health advice or professionals at her own club, but she says there is always someone to talk to.

“At my competition there isn’t any mental health advice available that I know of, however a lot of clubs have their own support networks and mentors available,” she said. “So not quite professionals, but at least someone to go to if they feel like something may be escalating.”

Australian Rules umpires face enormous amounts of criticism that could negatively impact their mental health. Every year in the AFL, umpires are under fire for decisions that people don’t agree with. Now that people are increasingly posting their opinions on social media, umpires are under more scrutiny than ever.

Howe says that demands of being an umpire particularly at AFL level, coupled with a “heavily scrutinised” match day environment contribute to, and negatively impact, mental health.

Just last year, AFL umpire Matt Stevic revealed on ABC Grandstand that he had received a death threat for a particular call during a Geelong v St Kilda game in 2010.

In the interview, Stevic also described the mental health impacts that are attached with umpiring.

“It’s a wonderful job but what comes with that are many stresses,” he told ABC Grandstand.

“I think we all underestimate how mentally demanding the game is and the stresses and anxieties attached to the sport.”

AFLUA CEO Howe says the organisation has “combined with the AFL over the last four or five years to provide better mental health outcomes”.

“This process started a few years ago where we engaged a company called The Resilience Project,” he said.

“They work with NRL [National Rugby League] clubs. It’s worked in Australian cricket and with AFL teams. They worked with us for 12 months and provided a range of seminars and assistance for umpires, so they had an understanding of what mental wellbeing was and what the issues were in it.”

“The AFL umpire department also has a performance psychologist who’s available for the umpires and then there’s a suite of other options including an employee assistance program, which is confidential.”

Although the AFL is working hard to provide a supportive environment for umpires at the professional level, the same amount of support is not available at junior levels. Howe says there is “no doubt” that the treatment of match officials is turning people away.

“I do a little bit of work in a local community football league to help out, and what happens in that space is that people at a community level see what happens at AFL level and they try and mimic crowd behaviours and that does become a real problem,” he said.

Howe believes umpire retention is an issue in Aussie Rules at the local level.

“I think historically what happens is there is no problem recruiting umpires, but within two years of recruiting an umpire, match day environments that are not supportive mean that they [local Australian rules sporting organisations] will lose about 50 percent [of umpires],” Howe said.

Despite the retention issues, Howe doesn’t believe punishing clubs for an unsupportive environment will fix the issue.

“Rather than be a series of retributions on clubs, I think it just needs to provide a real education process where the club volunteers are just encouraged to remain positive and support and then they become responsible for their own spectators,” he said.

“If we’re only going to be punitive and ban people from games, well, we’re not improving outcomes.”

While sporting officials at a professional level may have access to mental health advice and professionals, there is still a way to go at the local levels.

Retention rates of local umpires are very low according to Howe, meaning something needs to change to encourage more people to take part.

Taylor believes people need to acknowledge that officials are there “to help keep the game safe and fair”.

“No game is ever going to finish with every call completely perfect because that’s not how it works,” she said.

“We umpire to ensure the players aren’t breaking the rules, but umpires are human too and a lot of people forget that once the game starts.”

Photo: AFL umpires, by Michael Coghlan, available HERE and used under a Creative Commons Attribution. The image has not been modified.