There have been three crowd fights already this year, so is there a way to fix it? 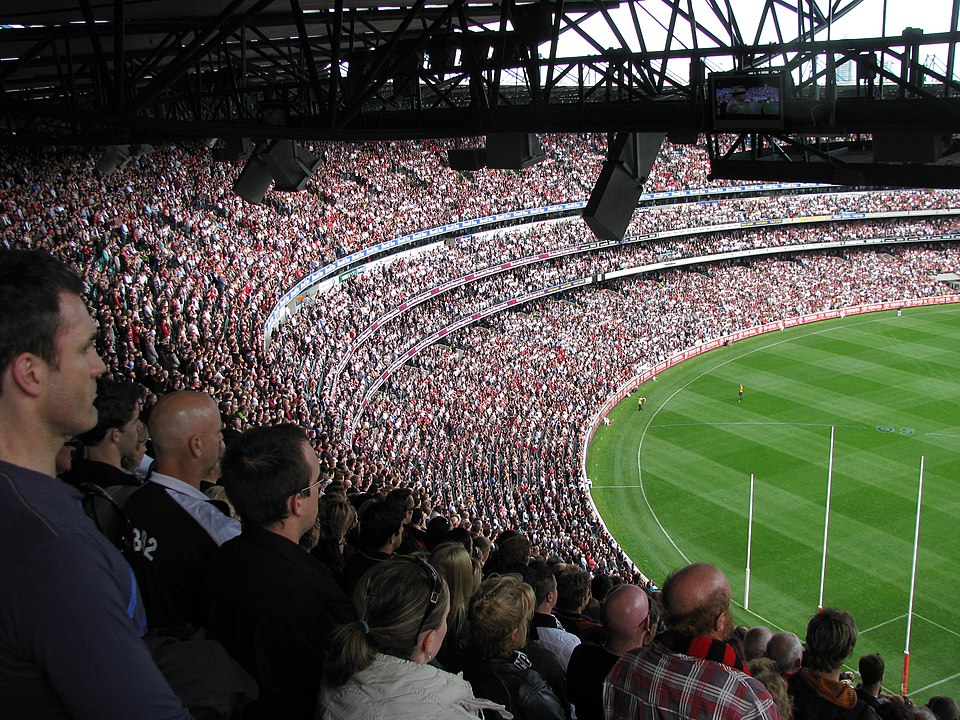 It’s only the halfway mark of the AFL season but there have already been three incidents of crowd violence at games. These incidents follow another four that occurred in 2017 and 2018, creating a worrying trend for the AFL.

The Foundation for Alcohol Research and Education believes alcohol advertising has something to do with the rise in violence, releasing research stating that 17 of the 18 AFL clubs have an advertising deal in 2019 with an alcohol company. Six clubs have major deals while 11 have minor agreements.

Dr Peter Miller, the lead researcher in the Driving Change Project, says it is this advertising that is one of the reasons that people drink and in some cases at the footy, very heavily.

“The role model is absolutely clear that alcohol is a good thing and you should consume a lot of it,” he told upstart. “We know that when you tell people to drink responsibly they actually drink more … the AFL shouldn’t fall for that sucker move.”

The first of the crowd violence incidents this year happened at the round one clash between Richmond and Carlton, followed by the round seven match between Melbourne and Hawthorn and lastly the round eight game between Carlton and Collingwood. All of these matches were played at the MCG. These incidents occurred either late in the game or after the match, between opposing fans who were under the influence of alcohol.

At the Melbourne v Hawthorn clash, the incident involved a disabled Hawks fan being called a “retard” and a “spastic”, leading to a beer being thrown at him by a Melbourne fan. Following the Blues v Pies clash, the Carlton cheer squad said on Twitter that they were subject to drunken abuse from Collingwood fans, leading to multiple altercations.

Football fan Nic Fleming witnessed a fight at the 2018 Geelong v Melbourne game at GMHBA Stadium and says that alcohol was a definite factor in the fight that evening.

“They’re obviously passionate about their teams but the alcohol definitely was a contributing factor,” he told upstart. “It started with a drink being thrown at the end of the game, which landed on another spectator and that’s how the fight arose.”

In response to these fights, the AFL has introduced the rule of only serving mid-strength beer at night games and full-strength during day encounters, as well as a variety of wine and spirits.

Although Dr Miller believes this rule is beneficial, he concedes that it can lead to increased alcohol consumption before a game.

“The mid-strength beer stuff absolutely helps … but people are pre-drinking more, so they’re drinking more before they’re going in,” he said.

Of the three fights this season, two were day games where full-strength was served, while the round one clash between Richmond and Carlton was at night. Dr Miller says serving only mid-strength beer goes a long way to solving the issues, which may need to be done at day games if the trend continues.

“Mid-strength generally helps a lot … by putting it in you really get rid of the harm and in the end the clubs still make their money, so it’s a good compromise,” he said.

As is the case in all sporting leagues around the world and generally any business, increasing revenue is the goal, and the stadiums that games are played at are no different.

MCG employee Bell Smith says that at the start of each game, all bars at the ground are given a financial target to reach by the end of the match.

“The target varies on what is served at that bar and the amount of traffic that comes in each quarter,” she told upstart. “A blockbuster game would have a target of around $15,000 to $20,000 and a smaller game would be around $4,000.”

Having a financial target is part of a normal business procedure, but the issue is that these bars stay open after the match, especially if the targets haven’t been met, in order to maximise profit. Smith says that on weekend games, her bar closes one and a half to two hours after the game has finished.

This means that specifically in cooperate boxes and high-profile bars at the ground, where full-strength beer is served at every game, there are more chances to drink post-match. This has presented issues, as some of the worst incidents have occurred in these areas.

The most violent of the seven crowd incidents since 2017 occurred in the Medallion Club at Marvel Stadium after last season’s St Kilda v Collingwood match-up.

The incident occurred after the match and as video footage shows, there are glasses of empty and full beers strewn all over the place. Fights like these prompt the question of whether security should be increased at games.

Smith believes increased security isn’t needed if people change their priorities while the game is on.

“Intensifying security could lead to patrons not feeling comfortable in the environment and take away from the fact that the MCG is an arena for sport and not for drinking,” she said. “Rather than security being on bars they should be designated to crowd control in the stadium or on the doors when people enter.”

“You can always introduce new and better ways to deal with it … having breathalysers and a clear statement that if you’re over .08 or .05 you won’t be allowed in the game,” he said.

Above all, Dr Miller believes that the most important way to prevent fights is getting the messaging right.

“The key thing is sending a message and making sure that the public understands that it’s not acceptable behaviour,” he said.

Photo: ANZAC Day 2010, Collingwood-Essendon by Gavin Anderson available here and used under a Creative Commons Attribution. The image has not been modified.

Ollie Nash is a third year Bachelor of Media and Communications (Sports Journalism) student at La Trobe University. You can follow him on Twitter @ollie_nash44