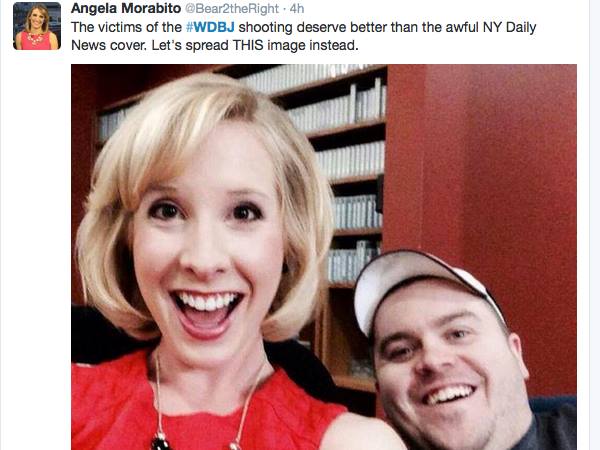 It’s hard to have missed the chilling public executions of Alison Parker and Adam Ward, whose final seconds were captured and broadcast on two cameras.

The first camera was operated by Ward, who was filming an interview between Parker and a representative of the local Chamber of Commerce, Vicki Gardner. The second camera belonged to the killer.

The public nature of the shootings has shocked the U.S. and the world.

Thanks to social media and the scramble of news organisations to report on the event, the footage of the shooting spread wide and fast.

The footage was confronting; there is no mistaking the sound of gunshots and the terrified screaming that follows.

The footage was unquestionably newsworthy; it was a shocking event that would pierce any news cycle.

Once Parker and Ward’s deaths were confirmed, the footage was alike a snuff film, the final moments of two lives broadcast for the world to see.

Some news outlets, like The Guardian, opted not to show the video.

Others had no such concerns. The New York Daily News has come under fire for putting screenshots of the footage on their front page. CNN was also showing the footage hourly.

Head of the communication and media department at La Trobe University and co-editor of Ethics for Digital Journalists: Emerging Best Practices, Lawrie Zion, tells upstart that media outlets need to be wary of the potential harm they can cause from showing such footage.

“There’d be harm to the people who are watching or who are known to the people who’ve been killed, don’t forget that in a circumstance like this, a lot of people who know the victims are actually going to be finding out through watching the media,” he says.

“That’s always meant to be a really important consideration when you’re a journalist – is someone going to find out that someone they loved died from watching television?”

Zion also says there are concerns that the coverage may encourage copycat crimes. The rambling note sent by the shooter, Vester Lee Flanagan, to an American news outlet, referenced other spree killers, Dylann Roof, Seung-Hoi Cho and Eric Harris and Dylan Klebold.

“There’s the broader issue of harm by facilitating indirectly or directly this kind of crime by showing what kind of audience a spectacular act of violence can achieve,” he says.

“This is part of the intention of the crime, to gain the broadest audience for it. I think ethically to facilitate people even finding this stuff is really dubious. Of course every case is a bit different, but I think where you have an ongoing issue like the coverage of the Sydney Seige, there are certainly elements of that where you could say the coverage risked facilitating the crime.”

While the manhunt for Flanagan was underway, he began tweeting his thoughts.

He also uploaded the video of the shooting from his perspective. Twitter’s autoplay function meant that anyone who found Flanagan’s post would be confronted with the first-person footage.

Autoplay, a function introduced to make it easier for users to view content, is an opt-out feature for Twitter, meaning it’s turned on by default.

The feature is now causing ethical concerns for Twitter.

“Social media is very difficult to control and you could say that in general it’s not desirable to control it,” Zion says.

“They [Twitter] are publishers, whether they like the term or not, the content that is enabled by their site is stuff that they’re publishing. So they do have an ethical responsibility to address the issues that are raised by these sorts of things.”

Twitter eventually deleted Flanagan’s account, and Zion says that it’s important for mainstream media outlets to be transparent in these cases.

“The threat of losing audience should be really balanced against what the benefits are of having a clear rationale for why you’ve chosen to do the things you do,” he says.

“I think that it’s a really important thing for media to consider, whatever decisions they make, for media companies to do explainers that point to the rationale for decisions they’ve made on how they’ve covered controversial issues like this.”

Zion also says that it’s important for large outlets to show leadership in these scenarios and lead the way for the rest of the media.

“I think an organisation can also benefit from choosing to do things in a particular way, from making editorial choices to not broadcast stuff, like how The Guardian decided not to show it,” he says.

“If you explain what’s behind that decision, you’re going build up trust with your audience, and I think that’s a really great thing to do. At a time where you can’t enforce a code of conduct across all media, it’s just impossible to do it. I think leading by example is a really important thing for a media company to consider.”