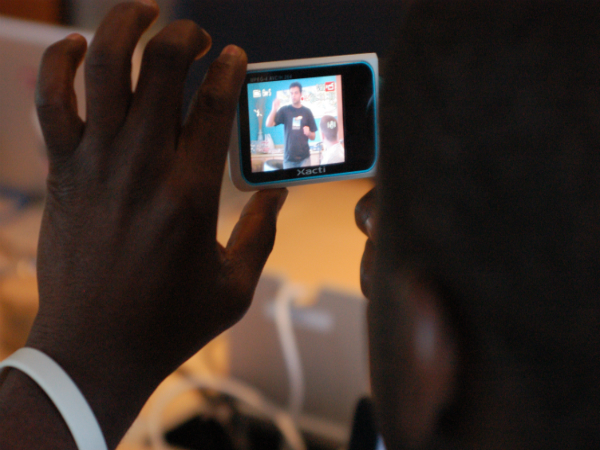 It seems anyone with a smartphone can be an on-site reporter in the digital era, each with the ability to capture events as they unfold.

Journalists can’t be everywhere at once, so the ability to provide viewers with footage that wouldn’t otherwise exist is a positive of citizen journalism.

When people take it upon themselves to create their own news stories by deliberately baiting public personalities, however, they are clearly overstepping the mark and this behaviour should be condemned.

The incident involving Hawthorn coach Alastair Clarkson and a Port Adelaide supporter is an example of this.

The drunk fan – who shall remain nameless in order to avoid adding to his fame – and his group of friends followed Clarkson from Adelaide Oval to the team hotel after Hawthorn’s loss to the Power in round four of the AFL.

As his friends were filming, the drunken fan acted in a disorderly manner. He edged closer and closer to Clarkson until he entered the Hawthorn coach’s personal space. Clarkson then reacted by aggressively shoving the young man to the throat in order to create separation.

While there’s no way Clarkson’s aggressive actions can be condoned, it’s clear that the perpetrator’s aim was to draw a reaction from the Hawthorn coach who has a history of short-tempered behaviour.

The public has a hunger for knowledge in regards to the lives of high-profile people, so an AFL coach lashing out at a fan will always be newsworthy. Both Channel Seven and Nine aired the unedited footage and it also appeared on numerous news websites.

Dr Denis Muller, a published author on journalism ethics in the digital age, tells upstart that the media has a moral responsibility when covering these incidents.

“Media organisations have an ethical duty to meet the public interest without gratifying the propaganda objective of the people doing these sorts of things,” he says.

“This is propaganda at a very unsophisticated and basic level but it’s nonetheless propaganda because what these people are trying to do is draw attention to themselves.”

The ethical dilemma for the media involves reaching an equilibrium between the public’s right to know and the possibility of encouraging anti-social behaviour.

By showing the face of the provocateur, other sports fans have now been made aware that, if they can get a reaction from a player or coach, they too will appear on national television.

It is for this reason that Dr Muller says the Clarkson incident could have been covered in a far more calculated manner.

“To pixelate the faces of the perpetrators or to fleetingly show their faces is a very sensible decision to come to,” he says. “We mustn’t give them the sort of publicity that they would find gratifying.”

As distressing as it may be for high-profile individuals, these incidents are likely to become more prevalent.

“Social media can now confer instant fame no matter how fleeting. People are seduced by the prospect of the old ‘fifteen minutes of fame’ idea or in this case fifteen nanoseconds,” Dr Muller says.

“I don’t think we’re anywhere near the peak of it yet. We’ll see a lot more of this sort of thing and then society will begin to self-regulate either by social conventions or by the introduction of new offences under the Crimes Act.”

Alastair Clarkson was put into a near impossible position and one that he shouldn’t have to deal with again. High-profile people deserve much better than to be subjected to this type of behaviour.

Unfortunately, a grey area exists in that there is no definitive answer to the way these matters should be covered. But if the Clarkson incident has taught us anything, it’s that the media must take more consideration when airing fan-supplied videos in order to limit the likelihood of copycat behaviour.