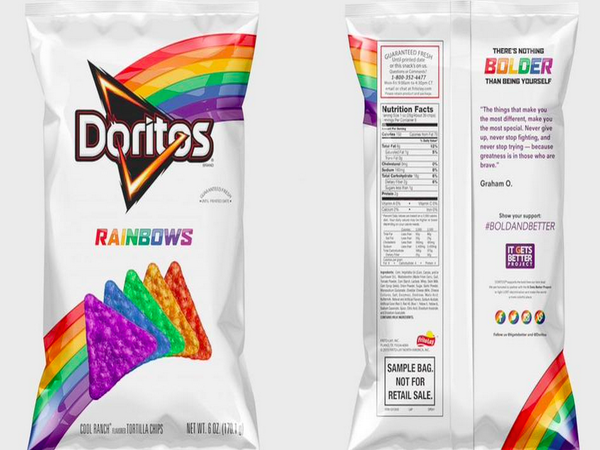 Mike Melgaard created a fake, yet convincing Doritos For Help account, and used it to respond to posts on Doritos’ Facebook page.

Doritos’ new rainbow flavour aims to raise money for the organisation, It Gets Better, which helps to build the self-esteem of young LGBT people.

While the majority of feedback received by Doritos has so far been positive, some have taken to social media to express their disgust in Doritos’ support of the LGBT movement.

“If you wish to endorse the homosexual lifestyle, you are certainly free to do so in our capitalistic society, and likewise as a capitalistic consumer, I exercise my right to choose not to fund your right to do so,” one Facebook user said.

“Facebook makes money by having you as a user. Facebook supports the homosexual “lifestyle”. Therefore, you being a Facebook user means you indirectly support homosexuality,” he said.

Melgaard has received support for his sarcastic comments, most of which received more likes than the Facebook posts themselves. 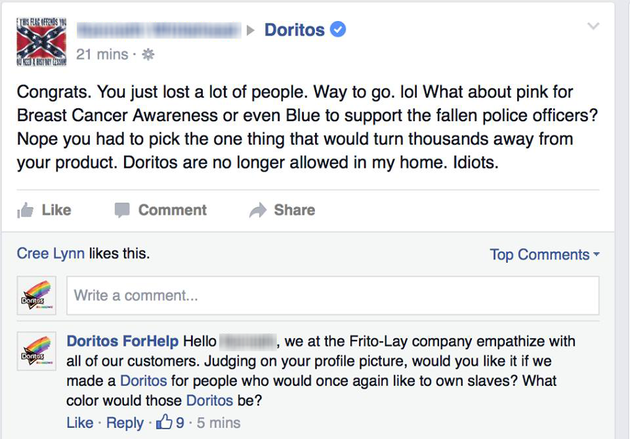 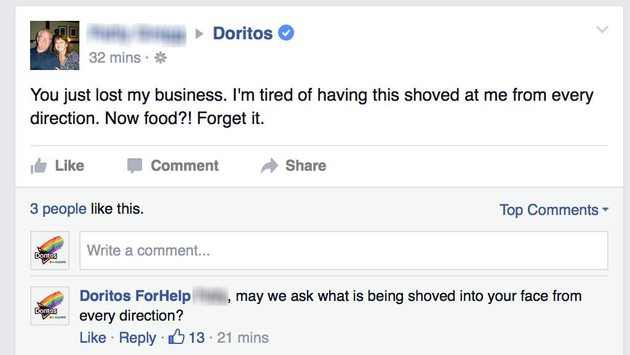 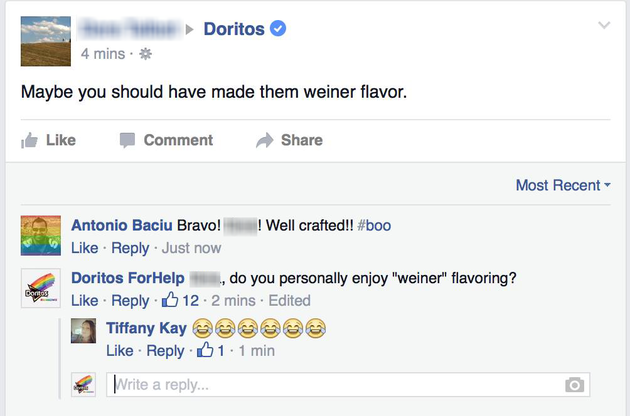 “I think many find [these posts] so appealing because I’m just openly calling this nonsense out for what it is,” Malgaard said.

“It’s amazing how many people are just waiting for the one person to come along and really say what everyone already wants to say. And, to top it off, there are those who really believe I’m a real help-desk person!”

This isn’t the first time Malgaard has used social media to call people out for their comments.

In August this year, he created a Target customer service account, Ask For Help, to respond to people’s negative comments about the company’s decision to remove gender signage. 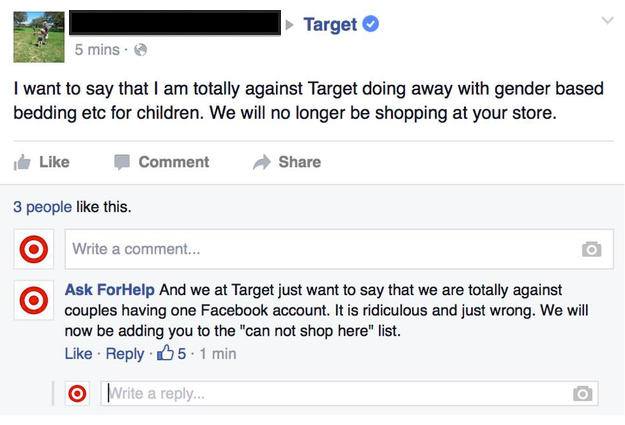 Given Doritos’ Facebook page has more than 15 million followers, should the company have responded to these criticisms themselves?

Expert in social media moderation from The University of Melbourne, Dr. Jennifer Beckett, tells upstart that Doritos would have been monitoring Melgaard’s comments to see what unfolded.

“In this instance, the best approach was to let Melgaard’s parody account actually take down the bigots,” she says.

“There was no need for Doritos to step in, it was already being done for them.”

She says that by doing this, it’s allowing community members to take control of the space.

“It’s a good approach to engagement, and as you would have seen they were getting plenty of people in their community supporting Melgaard’s actions.”

She says that had they wanted to, they could release a statement saying it was clearly a parody account, and reiterate their support of the It Gets Better initiative.

However, social media coordinator at Eureka Skydeck, Georgia Kavanagh-Dando, tells upstart her team responds to criticism as quickly as possible.

“We will always try our best to resolve any issues and keep our social community happy,” she says.

“We like to keep our social media pages as positive as we can.”

She says that offensive material is not tolerated on their social media sites.

“If our management team deemed any content offensive, trolling or criticism, we would have to use Facebook’s block and delete function to ensure our social space stayed as friendly and positive as possible.”

“Had they had a problem they would have hidden his responses and blocked him from the page. So I think we can safely say they didn’t have a problem with it,” she says.

“They’re probably kicking themselves that they didn’t hire him specifically for this after his Target campaign.”