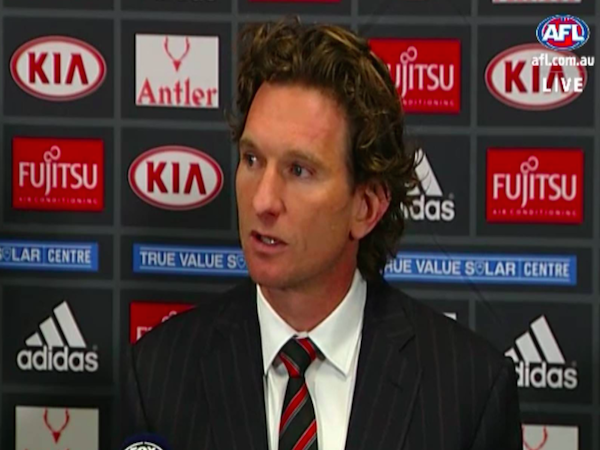 James Hird confirmed his resignation as coach of the Essendon Football Club this afternoon.

The two-time premiership player has received praise and support from Essendon supporters.

The hashtag #StandByHird, which was created during the supplements scandal, has been trending on Twitter. The club’s marketing slogan, #DonTheSash, has also been widespread on social media.

Hird thanked the supporters for their ongoing support.

“We are the most successful club in the AFL and mainly due to you, to your unrivalled commitment to our club. My family and I cannot thank you enough for your support,” he said at today’s press conference.

Some supporters have been less welcoming of the decision. Images have emerged on social media of people tearing up their membership cards and throwing away other memorabilia.

Thats a torn up membership and discarded merchandise on the steps of Essendon HQ @triplemfooty pic.twitter.com/mYsKgIgsYC — Ben Sathananthan (@bensathsports) August 18, 2015

There’s a guy at work who’s refusing to renew his membership now Hird has gone.I wish all Essendon supporters would follow suit #StandByHird

Some supporters are unhappy the Essendon Football Club has not taken into account the views of fans.

Many are disheartened that another coach is being moved on, following Matthew Knights’ sacking in 2010 and Mark Thompson’s short stint as head coach last season.

With the appointment of Matthew Egan as interim coach, the club will have seen four coaches in eight years, following the end of Kevin Sheedy’s 27-year tenure.

Thanks @EssendonFC for giving members false hope that Hird would see out his contract when this was the obvious plan. — ⓜⓢ ⓣⓝⓐ #BackOurBoys (@Ms__TNA) August 18, 2015

Nicole, Jane and Blair, who run the Facebook page Stand By Hird, tell upstart that they don’t blame anyone in particular for Hird’s resignation.

They say that external pressure was a likely factor.

“The media has played a huge roll [in Hird’s sacking], as has the AFL/ASADA/WADA debacle. It is very hard to blame one aspect but the constant media speculation has inevitably taken it’s toll on the club and in turn Hird,” the group says.

“Hird was a great coach, with constant media pressure and multiple injuries forcing him to play younger players he was always going to have trouble winning games of football,” the Stand By Hird group says.

While something needed to be done about the Bombers’ on field form, Stand By Hird says off field decisions were made at the wrong time.

“We think the club did need to do something, but with three games to go and a pending club review, maybe this decision could have waited until seasons end and the dust settled. It appears as though this decision has been made in the fog of war,” they say.

While the majority of the Essendon community supported Hird, it was ultimately not enough to save him.

“We wholeheartedly believe that James Hird was capable of great things. Unfortunately we will never get to see him live out that opportunity,” they say.

“No one can accurately judge Hird’s coaching capabilities whilst the club is under the WADA cloud and such external scrutiny.”

Sentiments about the former coach’s resilience and leadership have continued this afternoon.

I love you James Hird and the man of integrity that you are. I wish the club could look into homes and see the tears of members @EssendonFC — sandra dee (@sandik17) August 18, 2015

“He helped show those young men what it’s like to be resilient. Coaching goes a long way beyond what people see on the weekend, it’s about being a role model, counsellor and mentor off the field too,” Stand By Hird says.

The past few years’ worth of drama at Essendon has had the potential to damage Hird’s reputation. He was ranked by the club as the third best player in its history.

Chairman of the club, Paul Little, said that despite the drama that surrounded Hird as coach, he should always be remembered as a club champion.

“James Hird’s place in the history of our club should never be questioned,” he said.

He says that while some people’s views of Hird may have changed, his performance as a player should not be tarnished by the supplements scandal.

“A player’s post-football life should never influence [the legacy of] their playing careers,” Pocza says.

“He’s still a true champion and gentleman of the game.”