Couriers aside, road cycling has never really been cool. For too long it conjured up images of unreasonably snug lycra, or commuters overloaded with testosterone and neon accessories. For whatever reason road cycling has never embedded itself in the collective conscious the way Chopper motorcycles and BMX bikes have.

All of this could be about to change thanks to the popularity of fixed gear cycling.

More commonly called ‘fixies’, fixed gear bikes are single speed bicycles that do not allow the user to coast or ‘stop pedalling’. The rear sprockets are directly connected to the rear wheel, meaning that if you pedal forwards the bike moves forwards, and if you pedal back then the bicycle moves back. Whenever the bike is in motion the pedals are turning, so coasting is not an option. 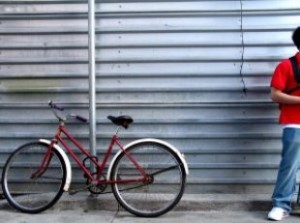 There are no brakes on the handlebars and there is only one gear. Braking is achieved by pure muscle power — reverse the pedals to slow down and stop. These bikes strip riding down to its primal essence.

It is an acquired taste and even the basics take a while to master. Just as skateboarding derives a certain purity by being just rider, board and city, fixed gears are simply rider, bike and city. Since you’re always pedalling, you are always in contact with the road. If you are living in a metropolitan environment, riding a fixie is probably the closest you will get to feel flowing motion — a symbiosis of human and machine.

However, new it may seem, fixed gear bikes aren’t new. Over a century ago, when racing bikes in velodromes took off, fixed gears were favoured for their speed, agility and lack of weight. Having anything attached to the handlebars, such as brakes, could also prove lethal in a crash so bikes were kept as simple as possible.  Fixed gear cycling soon found its way through to urban life.

Urban cycle couriers took the fixie onto the streets and created the subculture, which, as with skateboarding and surfing before it, is currently attracting interest from the mainstream. Fixies have developed a prominent sub culture in cycling, drawing many people to create a sense of self through customised bikes.

Eschewing brakes and gears mark the rider out as something of a purist. In this sense, fixies are a response to the suspension forks, disc brakes and multiple cogs of geared bikes, which have, up until recently, been the bicycles of choice.

‘There’s something about the fundamental ethic of the fixed gear bike’, says Debbie Burton, who specialises in urban messenger-style cycling clothes. ‘It has a purpose. It is easy to maintain so you don’t have to worry about riding around with loads of tools. But it’s not just about riding bikes, it’s a culture thing and a lifestyle because riding fixed is hard — you’ve got to love it’.

There are a growing number of people wanting to channel the cycle courier chic. ‘I have always thought cycle messengers are so cool, their fashion, layers, skinny trousers, caps, looks good off and on the bike. If you’re a messenger it says something about you — you’re independent, not a follower,’ says Burton.

Just as BMXers use the city’s landscape as a playground, so fixed gear riders, when they have finished seamlessly cruising through traffic, are gathering to practise their skills with a series of tricks. Track stands (balancing on the pedals), doughnuts, cycling backwards in circles and 180 degree skids may sound effortless, but they are tough to learn and show a certain amount of commitment and knowledge of the bike.

However, there is a possibility that the scene is too hip for its own good. If you bought a fixed gear bike ‘new’ (be warned: this is frowned upon — bikes should be built up and customised to be truly cool) the starting price is around $1,000 and custom builds can go way past the $3,000 mark.

‘Demand has gone up’, says Stephanie Hansen of CBD Cycles. ‘We now sell 15 different bikes from 10 different manufacturers and it’s become a much bigger part of what we sell’.

In other words, everyone wants a piece of the hipster action, as was the case with skateboarding, snowboarding and just about every other burgeoning sub-culture,

The increasing mainstream appeal of fixies has also thrown up some interesting safety issues. Without the necessary skill, riding without brakes could be lethal.

Safe or not, fixed gear cycles provide a sense of freedom; there is no need to shift gears, or to focus on brakes and the bicycle responds directly to your body. And the psychological simplicity and freedom gained from a fixed gear will ensure they’ll be on our streets for a while to come.

George Galanis recently completed the Graduate Diploma in Journalism at La Trobe University. This is his third piece for upstart.