Since switching from the round ball to the football, Ashleigh Guest’s life has been consumed by AFL, Ryan Rosendale writes. 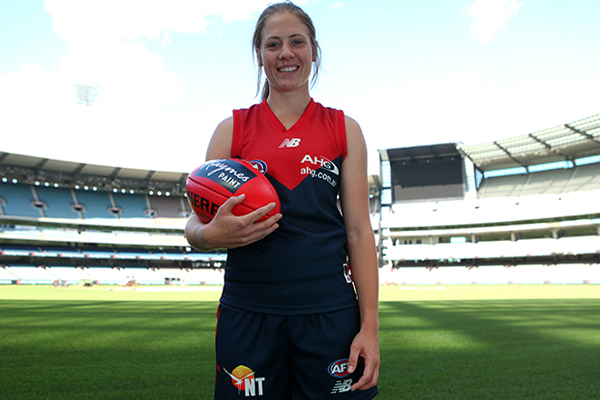 Guest, 25, grew up a talented softball player but when the time came to make a decision between sports, it was as quick as Lance Franklin streaming down the wing in 2010.

“I played pretty high-level softball through my teens and early 20’s along with some footy in high school but mum wouldn’t let me play,” laughs Guest.

“I still had an urge to play though so when I turned 18 I was all-in 100 per cent and went down and found a club.”

That club was the St Kilda Sharks and Guest spent her first full year of football there before moving across to her current women’s VFL club, the VU Western Spurs.

In her first year at the Spurs she played in a premiership, a victory she regards as a career highlight.

Guest describes herself as a quick midfield/half-back type player who does all the team things and competes hard at the contest.

Guest has been named as one of the Spurs best in six out of a possible seven games.

Guest feels her consistency is due to an elevated preseason thanks to a more focused approach to her football.

“I had a few years back where I wasn’t playing very well at all due to some other distractions but the AFL Vic Academy really turned it around this year.” Guest says.

“The academy meant that I had a really solid preseason.”

She also credits her good-form to the turnaround of the Spurs.

The Spurs failed to win a game last season but like Guest, the team has found some consistent form and is sitting sixth on the ladder with three wins after seven rounds.

Since crossing to the Spurs in 2011, Guest’s love for football has continued to grow.

When she’s not spending her time running through the midfield, Guest coaches the Youth Girl’s side at the Spurs along with the Melbourne Girls Grammar team.

While she juggles her time between playing and coaching, Guest believes both benefit each other.

“I take the game plans from our senior time and apply them to the youth girls in a way they can understand,” Guest says.

“Coaching has also given me a much better understanding of how I play the game because I’m able to go out there and explain and physically show it to the girls.”

Guest has also spent the last 18 months working in the Community Development Department at Melbourne alongside her biggest influence and Spurs coach, Debbie Lee.

Guest was rewarded for her dedication and consistency last month when she was selected as part of the Melbourne side to take on the Brisbane Lions on May 22.

It was an experience Guest says she never thought would happen.

“It was amazing. I felt like when we were running out there that the whole MCG was full but obviously it wasn’t,” Guest said.

“It was the most surreal feeling to have all the best coaches and have Lynden Dunn come down and train us.”

“I’ve only been playing for seven years so I never thought these opportunities for women would happen so it’s pretty exciting.”

Guest is hopeful her appearance on the MCG wasn’t a one-time deal and describes the opportunity to be a part of next year’s national women’s league as “really exciting”.

“Hopefully I’ll get to put on a guernsey for a club.”

Should her consistent form carry through to season’s end, Guest’s dreams might just become reality.

Ryan Rosendale is a second-year Bachelor of Media and Communications student at La Trobe University. You can follow him on Twitter here: @RosendaleRyan