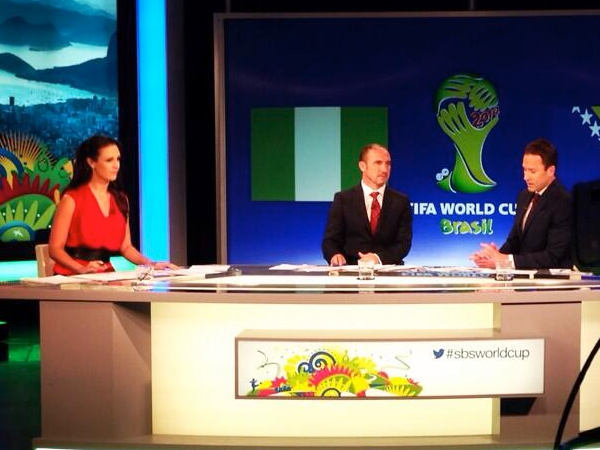 Lucy Zelic is still a newbie on the SBS block but after a year on Australians’ television screens, she is proof that women are capable of working in sports media.

Typically thought of as a male-dominated industry, Zelic relishes the opportunity to defy the stereotypes associated with being a woman in sport.

“That thrill and that challenge that I get from that prospect of proving them [men] that we [women] are worth it and proving that we do have a spot in the media is something that I love,” she tells upstart.

“Hopefully [people] know that I do have an understanding of the game and that it doesn’t need to be tested,” she says.

“And if they don’t agree with my opinion it’s not because I’m a woman and I know nothing about football it’s simply because I’ve got a different view to them.”

After only nine months with SBS, Zelic became the first woman to host its World Cup coverage – a responsibility she shared with David Zdrilic.

But life on the screen meant being thrust into the public sphere with little experience. The criticisms and negative comments she had to face was something she was unaccustomed to.

“From my perspective, a lot of people have to understand that this is my first year in a television role,” she says.

“How you deal with people that you don’t know criticising you or people coming up to you on the street and testing your knowledge… I wasn’t prepared for that and I surely should’ve been,” she says.

“But it was something I didn’t think I had to worry about cause I thought, well, I love the game and I love this job and that’s all that should matter but a lot of peripheral stuff starts to bleed into the frame.”

But Zelic is incredibly optimistic about her work and about the prospects for other women looking to get into sport media.

“I don’t want to put emphasis on the negativity that comes with my job because there are so many wonderful positives that do come with it.”

In an article for Daily Life she builds on this point:

“What frustrates me is that these isolated incidences [of sexism] have been the ‘highlight’ of our presence in the media, with the exceptional work that is being done often taking a backseat.”

She believes in the capabilities of women to fulfil and excel in roles in sports media and to be acknowledged for their work, rather than having them included only for the sake of representation.

“The one thing I’ve always wanted to take on for myself, you know, the challenge I’d sort of set for myself coming in to this was not to be the token female, so don’t be that person that just because you’re a woman and that you’re ticking everybody’s equality boxes.”

Zelic is now an integral part of SBS’s football coverage and joins a growing line of women who are succeeding in sports journalism.

She can’t speak highly enough those who have come before her. Her admiration and respect for other female sports journalists like Debbie Spillane of the ABC, who Zelic describes as a “trailblazer”, and Melanie McLaughlin, who Zelic praises for “[paving that path] for women [in football] like myself” is enormous.

Her support for female sports journalists is unwavering: “To have us in this industry, and by us I mean females, is a hugely crucial and vital thing because it’s starting to set the standard that, you know, your love for any one thing doesn’t have to be defined by gender. And that’s mainly the point that I want to make.”

“The sooner we start accepting that hey, we women are here to stay, the better it’s going to be because we’re not going anywhere.”

Far from thinking of gender as a curse for women trying to get into sports journalism, Zelic believes it can be advantageous.

“Of course there are gonna be differences between us and men… You only have to look Craig Foster and David Zdrilic – they’re on a completely different level to what I am because they’re former players,” she says.

“So what I like to think is that you have to separate yourself from those views and you have to acknowledge that.”

“The thing that puts you in good stead is that you do have an understanding of the game, it’s just a different one and there’s nothing wrong with being different.”

This assurance in herself and her abilities was something that took time. During her time at the University of Canberra, she was shortlisted for the Peter Leonard scholarship and a position at the ABC, but was unsuccessful at both.

Being knocked back “completely shattered” Zelic.

And her advice to aspiring female sports journalists is simple.

“By all means be proud of being different,” she says.

“Be proud of being a woman.”