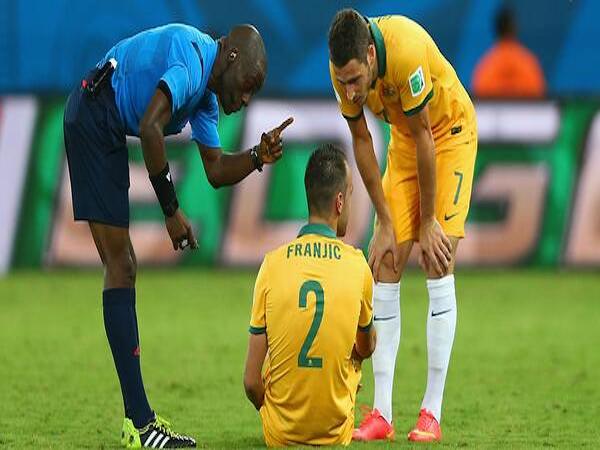 Ange Postecoglou’s decision to cut veteran full back Luke Wilkshire from his 2014 World Cup squad may now came back to haunt him, with first-choice right back Ivan Franjic ruled out for the rest of the tournament.

Franjic was withdrawn after only 48 minutes during the Socceroos’ 3-1 defeat to Chile on Saturday morning with a torn hamstring, leaving Ryan McGowan to slot in at right back.

McGowan is no stranger to the full back position, but by trade is a centre half as question marks now circulate around Postecoglou’s omission of Wilkshire.

It may now be seen as treason to question Posteglou’s decision-making after a promising performance against Chile, commencing a new era off the back of an unforgiving cull of the ‘Golden Generation’. But the simple fact is Australia desperately requires a right-sided defender.

It’s no secret Postecoglou has always preferred Franjic at right back since succeeding Holger Osieck in October last year.

Despite some Socceroos fans expecting Wilkshere to get the nod over his Brisbane Roar counterpart, the 32-year-old’s exclusion from the final 23-man squad sent created the biggest waves throughout Australia.

Heightening the astonishment, Wilkshire donned the captains armband during the Socceroos first warm-up match against second-tier Brazilian outfit Parana Clube, while Franjic sat on the sidelines with a knee injury.

“That’s the one I’ve got an issue with,” Slater said.

“I’m not saying it’s the wrong decision, but he’s been to two World Cups. Surely Ange knew when he picked the 30 that he didn’t want Wilkshire.

“I’ve been one for rejuvenation and regeneration, but I feel sorry for him (Wilkshire). I don’t think it (his omission) has been handled in the best way.

“Whether something happened in camp, I don’t know. His experience at the back could have been helpful and also his experience around the camp.”

Rumours and speculation have since increased surrounding Wilkshere’s fitness, as well as issues about his weight, throughout the lead-up to the squad flying to Brazil.

Now shy of a full-time right back, Postecoglou will have to rely upon makeshift full back Ryan McGowan, who had an infamously torrid time directly lining up against Brazilian superstar Neymar on the right side of the defence last year as the Socceroos were demolished 6-0 in Brasilia.

With the likes of Arjen Robben and David Silva expected to play down the left for the Netherlands and Spain respectively in Australia’s next two matches, McGowan serves as a humble replacement in caparison to the 80-times-capped Wilkshere, who previously appeared at both the 2006 and 2010 FIFA World Cups, not to mention regularly featuring for Dynamo Moscow.

Furthermore, his presence would have been invaluable amongst a reasonably inexperienced back four who conceded two goals against Chile in a matter of minutes – some calling into question Franjic’s positioning in the build-up to the second goal.

Although McGowan is the preferred favourite to take his place at full back, Postecoglou revealed there were other options available.

“Ryan is a solution, there could be a couple of different things in the way we approach things,” he said.

“Holland represents a different problem to Chile so we’ll have a look in the next couple of days.”

It’s not all doom and gloom though for Postecoglou and his defence.

Matthew Sprianovic was one of Australia’s best performers on the night alongside Alex Wilkinson, who achieved a relatively unheralded pass mark excluding the first 20 minutes.

Full back Jason Davidson, on the other side of defence at left back, held his own and showed he warranted a place in Postecoglou’s side.

The Australia boss will now be hoping McGowan or another alternative can reproduce a similar performance to Davidson against the Netherlands and Chile to come.