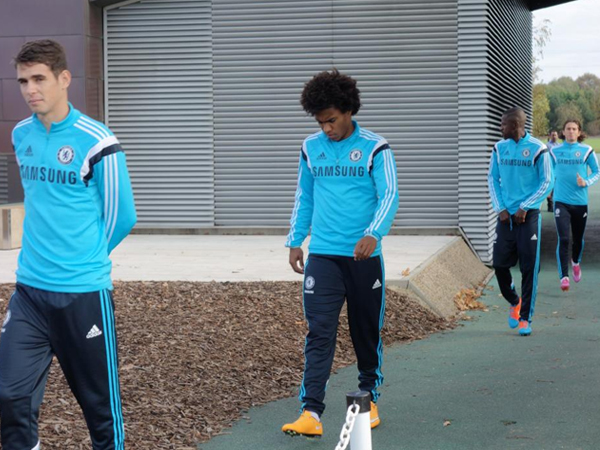 Passion is an absolute necessity for anybody looking to stand out in what is a dog-eat-dog blogosphere in constant battle with mainstream media.

Andy Seaby, the founder and editor of Chelsea Daft, is an outstanding example of how dedication, broad knowledge and levelheadedness can underpin the credibility of a non-official football blog.

The blog tagline, a Chelsea fan’s blog, might seem unremarkable, but it actuality rings true for Seaby more than most who pledge their allegiance to the southwest London club.

His blog embodies the intense passion of a man who has supported Chelsea since the age of five and ridden the highs and lows for more than 30 years.

His earliest memories of the club are helping his father and grandfather at a grocery stall around the corner from Stamford Bridge on North End Road.

Teeming with a passion matured over three decades, Seaby created Chelsea Daft in March 2009 with the ambition typical of almost every new blogger.

Training is underway at Cobham. Here are the Brazilians heading out earlier… #CFC pic.twitter.com/9twgOQ3p04

Chelsea Daft keeps Blues fans up with all the latest news, but is immersed with the opinion of a man who lives and breathes the club.

Seaby is no different to other bloggers in the sense that he thrives on an elusive feature that converts once-off readers to loyal followers. He believes the colloquial undertone of his content is the distinction between Chelsea Daft and the hundreds of other related websites out there.

He says: “I believe I write as if I am talking to you down the pub. I think people can relate to it and they respond to that.”

Seaby admits it was difficult to establish credibility in such a competitive area of the blogosphere, but his conversational writing style slowly pulled in a decent readership.

Coupling his persistence with the social media updraft of the last five years, Seaby has watched Chelsea Daft soar above his competitors and rank among the top Chelsea blogs on the web.

If utilising social media is the first step to expanding a blog audience, featuring on NewsNow is a giant leap.

Seaby recalls “everything went mad” after the news aggregation service picked up his RSS feed and began spreading his content into untapped areas. However, along with the rapid growth of Chelsea Daft came a typical blogger’s dilemma.

Seaby is confronted with striking the delicate balance of producing enough content while juggling a busy lifestyle. His job demands 12-hour shifts, four days on, four days off, and yet every day he still finds the time and energy to keep Chelsea Daft ticking over.

“Let’s just say I manage the best I can. I always spend at least an hour or so if I am working… and around 2-3 hours when I am off shift,” he says.

Considering Seaby’s commitments away from the computer, it’s remarkable he has sustained the growth of his blog with the help of just one additional writer.

Esk Weston, who covers the club at youth level, is the only helping hand he needs. However, Seaby has previously invited additional bloggers to contribute to the site.

“I did give it a go but many people didn’t like it as they had got used to my writing style and general sense of opinion,” he says.

Given the success he has achieved with his personalised formula, Seaby is understandably reluctant to allow others to dilute the footprint he has left on the Chelsea blogosphere.

“You feel as though [the blog is] yours, only yours and become protective over it,” he says.

His decision to go it alone on the main section of the blog has reaped rewards on a number of occasions. In 2010, the Chelsea Daft was named Chelsea Blog the Year by A Different League and Chelsea Blog of the Season by For Him Magazine.

Seaby is gratified to receive praise of any kind, but particularly two awards within a year of the website’s inception.

“To achieve any level of recognition is fantastic and it means a hell of a lot,” he says.

But of all the accomplishments Seaby has under his belt, few compare to the offer he received from his beloved Chelsea.

Seaby was contacted by the club to write posts on the official blog site and when asked how such a prestigious opportunity came about, his response is rather modest.

“I have written a few on there but need to do more,” he says.

It’s no surprise the club approached Seaby; his ingrained avidity is the motivation behind Chelsea Daft rather than a hunger for fame and kudos.

Seaby prides himself on producing a levelheaded and pragmatic analysis of how the club is faring, and he has no qualms discussing the Blues’ current form.

As Chelsea sit unbeaten atop the Premier League table, Seaby pinches himself when he reflects on how far the club has come during his lifetime.

“I still can’t believe that we are talking about the club being right up there now, compared to where they were ten years ago,” Seaby says.

“Football has changed and moved on so much in that time and for Chelsea to have maintained their record in the Premier League and Champions League, it really is amazing.”

For a life-long supporter who has stuck by the club through the good and bad times, Seaby welcomes the belief Chelsea is set up to dominate for years to come.

“With Jose Mourinho at the helm and at the club he calls ‘home’, I cannot wait!”

Luke Karlik is a first-year Bachelor of Journalism (Sport) student at La Trobe University. You can follow him on Twitter: @LukeKarlik