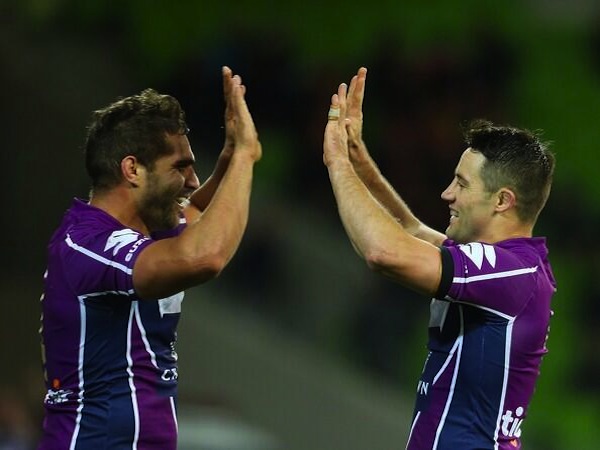 Just like its motto says, Melbourne Storm is no ordinary team.

After a slow start against cellar-dwellers Parramatta on Sunday, the Storm clicked into top gear in the second-half, running in eight tries to none in an emphatic 64-4 win, securing a top four finish in the process.

The win was the Storm’s fourth consecutive victory and as is so often the case, has it peaking at the right time of the year.

The second-half rout was highlighted by Billy Slater’s hat trick, but the more promising signs came from youngsters Kenny Bromwich and Tim Glasby who scored their maiden first grade tries.

Melbourne Storm has unveiled seven debutants this season, a stunning effort considering the success of the side in an extremely close competition.

It started the season in scintillating fashion, winning its first seven games, extending a club record of 15 consecutive wins. Melbourne has found the perfect mix of young guns and experienced leaders this year.

Captain Cameron Smith, Billy Slater and Cooper Cronk make up the big three who have dominated Origin and club football for much of their careers, and they get most of the praise for the way Storm has been playing. However, there is a fourth player who has been a stalwart in this dominant era.

Ryan Hoffman, a victim of the salary cap fall-out, returned to the club in 2012 after a one-year stint in England, with Super League side Wigan. Hoffman has been in career best form this year and scored another double on Sunday.

One of most encouraging signs for the Storm is that it has secured its future by re-signing exciting young wingers Sisa Waqa and Will Chambers for a further two years. It has consolidated a core group of young talent including the likes of Kevin Proctor, Justin O’Neil, Jesse and Kenny Bromwich, which will all lead the Storm into the future.

In terms of the NRL landscape they are very positive signings, with mid-season moves and poaching from rival clubs not an uncommon practice.

Another shining light has been 20-year old Mahe Fonua.

The first Victorian born player to represent the club, Fonua made his debut in round 23 of last year before scoring his first try in the qualifying final against the South Sydney Rabbitohs.

This season Fonua has scored nine tries from his 14 appearances.

He is one of Storm’s core group of talented youngsters, aged 24 or under.

The dark cloud that lingered over the club after its salary cap debacle has long been lifted, and with the team’s young guns stepping up, its future is looking very positive.