‘You can come forward and have a pat if you like.’

A pat of what, you might be wondering? The simple answer is two and a half tonnes of rhinoceros named Kapamba.

Werribee Zoo, just 35km west of Melbourne, is home to seven mud-covered White Rhinoceros, and Kapamba is one of the three males in the outfit. The zoo offers a series of ‘Wild Encounters’ – one of them being the ‘Rhinos Revealed’ adventure – and as promised, I was able to get up close and personal with these wondrous creatures. Their caretaker described Kapamba as the ‘two-tonne Labrador’ as rhinos are generally a placid bunch. It’s just their looming size that would make you think otherwise. 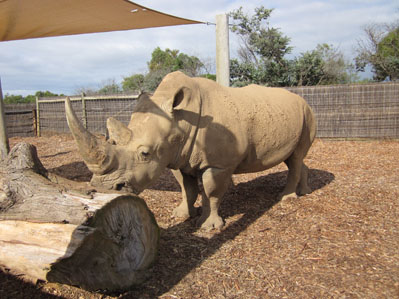 My personal encounter consisted of me and just four others, so the experience was even more intimate. If you’re not fazed by bumpy rides and fresh winds whipping your face, then you’ll enjoy the drive in an open-air truck along the zoo’s dirt tracks and grassland into rhino territory.

The amazing thing about Werribee Zoo is the vast open space. In comparison to Melbourne Zoo, where the animal enclosures are distinctly assigned, Werribee takes pride on being an open range zoo. It’s situated on 500 acres of grassland, and you’re likely to see camels and bison occupying the same spaces.

The first rhino we met was Leeroy, the big old guy whose renowned characteristic is his upper horn — usually the top horn of a rhino is considerably shorter than the bottom, but Leeroy’s is quite prominent due to the protein he obtains from his lucerne hay diet.

But it was Kapamba that I was keen on meeting — the shy 15 year old male that proved to be a gentle giant. His size only dawned on me once we were standing right next to him. We hesitantly approached him, each of us clearly waiting for somebody else to go first. In the end, curiosity won over the nerves and before I knew it I was patting a rhino. 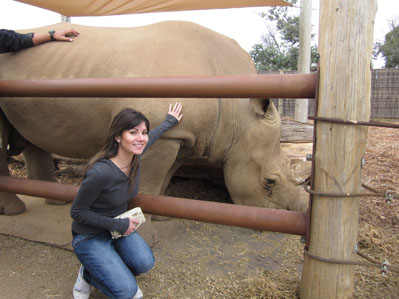 Kapamba and I developed a special bond and are now on first-name terms.

Contrary to my expectations, Kapamba’s skin was tough and coarse — a scaly-looking grey coat designed to protect the rhino. It almost feels like you’re running your hands along a rough piece of rock — one that gently moves. Tiny hairs run sparse across their huge muscular bodies, thickening only around the tail and ears. And while most of their bodies are firm, softer patches of skin make up the areas between their bellies and legs, which don’t need as much protection. 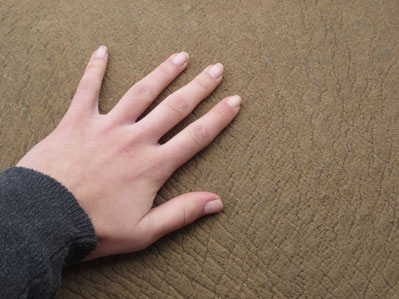 Just to show how coarse the skin is.

The experience lasted for just over an hour, definitely making the price worth it. It’s also one of the newest encounters, having only started last year. Not only did we touch and feed Kapamba (rhino saliva included), but we had all our questions answered by the friendly staff, who fed us lots of rhino trivia — gestation periods and breeding methods, anatomy, behaviours, and so on. Like a lot of animals in the wild, the rhinoceros population is sadly depleting due to poachers who are after their keratin-based horns for use in traditional medicines, among other things.

Once the meet and greet was over, we continued along to another site occupied by Werribee’s four female rhinos and the one seemingly lucky male, Umgana. Sitting inside the vehicle, it was amazing being able to ‘rhino-watch’ the group in such a peaceful setting as they contentedly grazed around us and shared their turf with the casually lurking zebras. 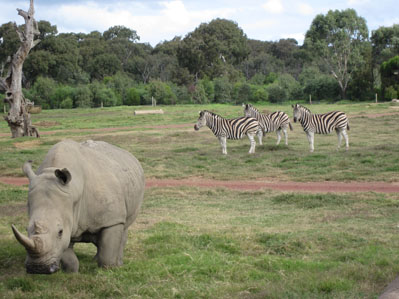 You can see different animals in the same area — exactly what you'd expect in the wild.

Werribee Zoo’s other encounters include behind-the-scenes experiences with lions (not as close up as the rhinos, for obvious reasons), giraffes and African cats. Then there’s the open vehicle adventure as well as a ‘Mini Zoo Keepers’ encounter for the little ones. They can get pricey, with costs ranging between $65 and $80, but it’s not every day that you get the chance to stand side-by-side with animals of the wild. There is also a Slumber Safari option, where guests have the opportunity to camp in luxurious tents overnight. This one is considerably more expensive, but the amount that’s on offer here – barbecue feasts, campfires, breakfasts and of course, close-up encounters with the animals – would be well worth it.

If you prefer to simply peruse the zoo at your own pace, there are three separate walking trails you can take. Of course, being the hippopotamus-enthusiast that I am, it was essential that I took the Pula Reserve trail, which led me to the adorably aggressive, ‘roll upon roll’-skinned mammals. Needless to say, I never did get the opportunity to bring one back home with me. 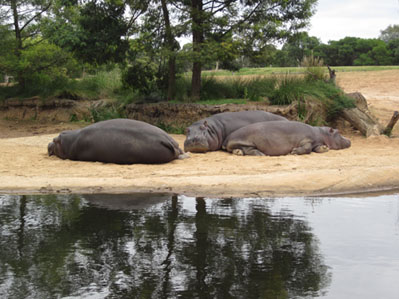 Tell me they're not cute...

The zoo also features monkeys, African wild dogs, meerkats and ostriches among many others, and will soon be home to three male gorillas from Melbourne Zoo, including the popular Yakini. Each exhibit is personalised for the different animals and the pathways are all individually crafted to depict a quirky, educational and entertaining jungle-like setting.

Admission prices are fairly reasonable at Werribee Zoo. Adults pay just under $25, while children and adult concession prices fall below $20. This fee is also inclusive of a 45-minute Safari Tour, which takes you around the zoo’s savannah and gives you plenty of opportunity to snap some great photos. The tours run regularly throughout the day. 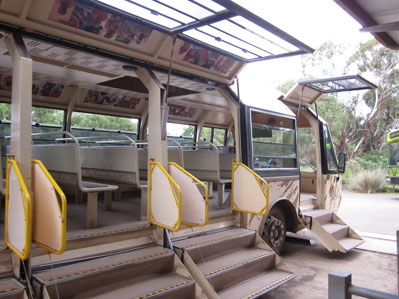 In terms of dining options, the zoo does have a bistro and kiosk that offer standard take-out meals, however it might be worth bringing a packed lunch if you’re keen on saving a little money here and there. The food was in no way bad, but it’s as much as you can reasonably expect from a fast-food kiosk.

Werribee Zoo is a place I can now tick off my to-do list, but it’s also one that will be on the to-do-again list. It’s clearly great for little kids, but my 21-year-old self knows that you can never be too grown up for a zoo… 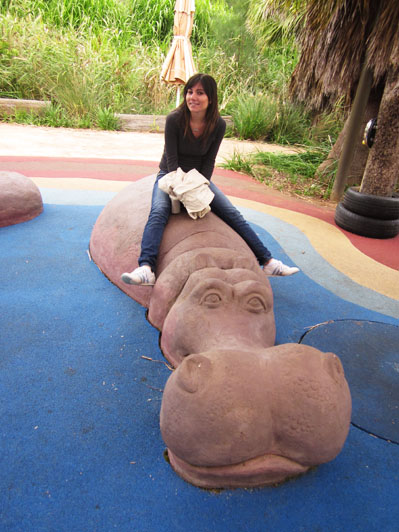 Although the author did not leave Werribee with a hippo, she has now accumulated a new love for rhinos and is one day hoping to have both in her backyard.

Werribee Zoo is open every day from 9am until 5pm. Entry gates close at 3:30pm. For more information on the zoo’s news and events, you can visit their website.