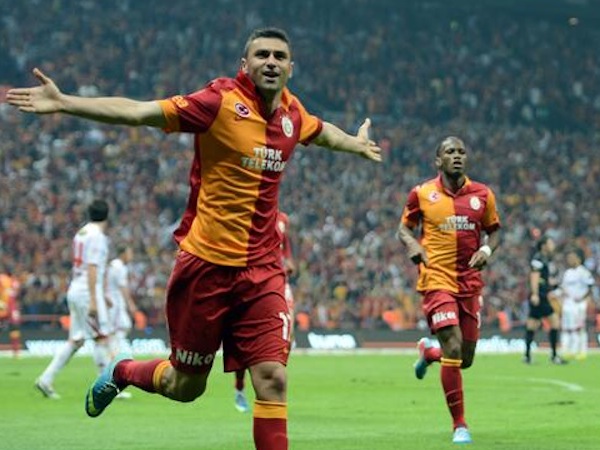 As Bayern Munich and Borrussia Dortmund exalt themselves in the glory of the Champions League final, the rise of German football is on the lips of every fan and follower of the beautiful game.

However, under the guise of an underdog, Galatasaray has slyly raised its standing in European Football.

Having valiantly bowed out to Real Madrid in the Champions League quarter-final, the Turkish giants went on to win the Super Lig by ten points over bitter Istanbul rivals, Fenerbahce.

Over the last 12 months, the current champions of the Turkish Super Lig have began setting a solid foundation for a period of prosperity. Thanks to an injection of capital, Galatasaray has been welcoming big name players, all of which were integral to its recent success both domestically and internationally.

However, a significant question remains unanswered; do Galatasaray really have what it takes to become the next European force?

For many fans around the world, Galatasaray is a relatively familiar club, making regular appearances in European cup competitions.

Aside from beating Arsenal in the 2000 UEFA Cup Final, featuring a heart stopping penalty shoot-out, the Turkish champions have had limited success in Europe.

Although, for those residing in Turkey, the prospect of facing Galatasaray is a daunting one. They recently became 19-time champions of the Super Lig, and hold 14 Turkish Cup trophies, making them the most successful football club in Turkish history.

With such deeply successful roots it is no wonder that Galatasaray are beginning to show signs of exponential growth and development on a larger, more ambitious scale.

Beware of more than just ‘the Drog’

The signing of Didier Drogba was a clear statement of intent to the footballing world. The 35-year-old veteran is certainly past his best, but his trophy riddled history and winning mentality would be an asset at any club.

Although Drogba has netted five times in just ten appearances since his 2013 arrival, it is important to note that Galatasaray has far more than just the former Chelsea forward up its red and yellow sleeves.

The widely reported acquisition of Wesley Sneijder was also a huge coup for the club. The 28-year-old was signed on a three and a half year deal, meaning that Galatasaray will hope to build its team around him in the coming seasons.

Additionally, the rise of Burak Yilmaz, who scored eight goals in nine Champions League appearances – bringing his season total to 24 – has excited many Galatasaray fans.

Names such as Hamit Altintop, Felipo Melo and promising goalkeeper Fernando Muslera also help make up the backbone of a very auspicious Galatasaray side.

The status and expertise of the players mentioned above will provide Galatasaray with short term success, along with the potential to attract even more high quality players. This could be a great asset for the team going forward.

After a successful spell as manager of the Turkish national team, Fatih Terim earned himself the nickname of, “Imparator” – which translates as, “The Emperor”.

Terim famously led Turkey to the Euro 2008 semi-final, where they were beaten by a powerful German outfit. Along the way, Fatih Terim inspired exceptional comebacks and resilient performances. As a result, the late Sir Bobby Robson recommended Terim for the then vacant managerial role at Newcastle United.

However, in 2011, Terim returned to the managerial post of his most beloved club, Galatasaray.

Terim is a popular figure at the club, having made 327 appearances between 1974 and 1985. His passion for Galatasaray paired with his managerial prowess makes him the perfect man to lead them to the European glory they currently seek.

Galatasaray will have to jump over some challenging hurdles in order to achieve the success they are currently building towards. Players such as Burak Yilmaz, Hamit Altintop and Wesley Sneijder are highly sought after, and thus Galatasaray may face a long, tough struggle in keeping them at the club.

A lack of exciting youth players coming through the ranks is also worrying, as players such as Didier Drogba near retirement.

The Turkish giants may possess a strong enough squad for the Turkish Super Lig, but long term investment is needed in order to compete with the European elite. Wise, encouraging transfer moves, new contracts for key players and youth scouting investment is vital for the growth of the club.

Galatasaray must also ensure that they stick with their current manager, Fatih Terim. His domestic and international credentials have been proven useful. His services with the skills of world class footballers has been proven a success- leading them to a Champions League quarter-final.

A balanced mixture of wise investment and managerial stability is precisely what Galatasaray need within the coming months and years, if they are to reach their highly exciting potential.

All the ingredients for long-term European prosperity are present – Galatasaray simply need to implement them correctly.

Josh Evans is a freelance sports writer and a writer for Aford Awards.