These two words have described the thinking by most in the press gallery as the opposition put question after question to Julia Gillard this week about her involvement in the establishment of an incorporated association almost two decades ago.

And it’s these exact two words which were issued in a statement by the prime minister’s office prior to the final question time for the year yesterday.

Earlier in the day, Opposition Leader Tony Abbott ramped up his attack against Gillard, telling the Nine Network:

Plainly on the basis of the documentary evidence of the unredacted (Slater and Gordon exit interview) transcript, she gave false information to the West Australian authorities…  For a senior lawyer to make false claims to an important statutory body like this is a very, very serious matter… it’s in breach of the law I would think and it’s certainly very, very unethical.

A statement he didn’t repeat in parliament later in the day. 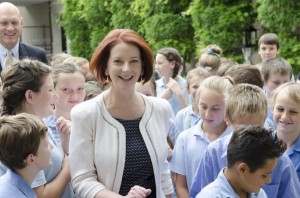 Walking over to the press gallery just before question time, there was an eerie feeling in the corridors of parliament. Perhaps it was the calm before the storm.

Instead of waiting for another question on the AWU issue at two o’clock, the prime minister went on the front foot, moving a motion to get Abbott to explain why he alleged that the PM had committed a crime.

Abbott rose to his feet, speaking in a soft and somewhat timid voice throughout his 15-minute speech. He outlined the case the Coalition had been making for most of the week in question time – and the PM tore it to shreds in her response.

Abbott failed to make it clear to the parliament, and indeed the rest of us, why he went from an ‘I’ll give her the benefit of the doubt but she has questions to answer’ mentality to a ‘she’s a criminal’ one.

After weeks and weeks of bickering he finally had a proper accusation to put to her.  That the PM, despite having said she only ever advised on the establishment of the AWU association, had in fact written a letter (which Gillard says she can’t remember writing) saying that the body which claimed not to be a trade union, wasn’t a trade union.

Right. So what’s the law that’s allegedly been broken here? I don’t know. The only accusation that could have been made is that Gillard’s version of events don’t add up if the letter is legitimate.

Abbott had 15 minutes in the parliament yesterday to make clear assertions.  And yet as it was the case every day this week, his side of politics became the story rather than those pursuing one.

In the morning, the Coalition called Gillard a crook and said she should resign. No one repeated this in parliament. In fact, the opposition did move a motion to suspend standing orders to debate their proposal to reintroduce temporary protection visas. But why not instead move a motion to get the PM to address parliament?

An accusation of criminal conduct in reference to a country’s prime minister and a call for her resignation surely merits more than a doorstop interview outside of parliament.

What sent Gillard off confident as she walked away from the last parliamentary sitting day of the year is that most people are left wondering what it is that Abbott and the opposition are accusing her of.

In the chamber, Gillard stood tall, and looked as confident as ever. The ‘real Julia’ if you like, was on display. She described Abbott’s speech as ‘halting’ and ‘nervous’, and warned of potential ramifications to his actions, saying ‘we’ve seen this movie before’. She was of course referring to the Godwin Grech affair, which had dented then opposition leader Malcolm Turnbull’s credibility.

During question time, as Jenny Macklin answered a question on the NDIS, Gillard sat back in her chair, sipping her water, rubbing her hands and speaking ever-so-confidently to Anthony Albanese who had come to sit next to her.

She smiled, her legs crossed, her head titled back, exerting utter confidence – a sign of victory, perhaps.

This was a huge contrast to Abbott, who sat very still, clinching onto a pen, occasionally turning around and passing notes with his deputy, Julie Bishop, and Christopher Pyne, who were both scrimmaging through the various documents they were holding – a sign of desperation, perhaps.

And that was that.

The opposition had its chance this week to put proper allegations to the PM. She had a right to defend them. Instead what we got was a long week of insults and unsubstantiated accusations flying across the place.

Oh, and at some point there was a decision to abstain on a vote about something happening in the Middle East. And something on education. And disability. And indigenous recognition. And asylum seekers. And an historic apology to members of the Australian Defence Force.

Maybe we’ll wonder what the PM was thinking about all of these in 20 years.

In the meantime, much damage has been created by the AWU issue. As the 7.30′s Chris Uhlmann so accurately put it, more so on the institution our political leaders serve.

Erdem Koç lectures in journalism at La Trobe University.  You can follow him on Twitter:@erdemkoc