The car was stacked with gear, the convoy was arranged and the slabs of canned beer had been bought – for the second time this festival season.

Golden Plains, only in its fourth year, is the little sister of Meredith, the BYO music festival in country Victoria. Although it’s little in size, with less tickets being released than for Meredith, it makes up for it with the class acts to perform. 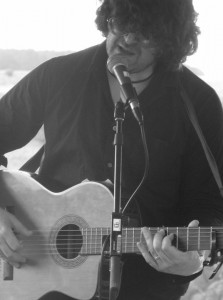 Once our beer was in the esky and the tent was erected – and we were sure it was somewhat waterproof after noticing the ominous clouds in the distance – we ventured down to the Supernatural Amphitheatre, the single Golden Plains stage.

The official opening ceremony kicked events off followed by Royal Headache and The Crayon Fields, both of which were pleasurable introductions to a weekend of stellar music. Clairy Baby Browne and the Bangin’ Rackettes were a tasty morsel of soul but it was Monotonix who really got the party started.

Their hard rock ‘n’ roll wasn’t particularly tight. In fact, it was downright awful at some points. But, the band was engulfed by the crowd for most of their set and some members of the band spent the entire time crowd surfing while continuing to play. So, can you blame them for the low degree of musicality? They were entertaining to say the least, a highlight being when the drummer passed his bass drum and stool to the eagerly stretching arms of the manic crowd and played over a sea of heads while struggling to say on his stool.

Eagerly anticipated duo the Big Pink followed and brought with them their lauded indie rock. Suddenly, the audience was full of swooning girls – that’s what happens when you get an attractive guy to play a guitar. After returning to the tent to collect some much needed beers, it was time to nod to the nineties with Pavement and Dinosaur Jr. 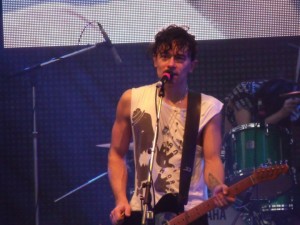 Having recently acquired the newly released Best of Pavement CD, I thoroughly enjoyed their set. However, unfortunately, my attention waned during Dinosaur Jr as I suffered from a lack of prior knowledge about the band and their music. Talking to others, I deduced that this was a common problem. However, the nineties rockers were enjoyed in equal measures by long-time fans and more open-minded newbies alike.

It was past midnight and it was only copious amounts of caffeine keeping me awake. However, DJs Andee Frost and Ransom were worth the late night and the perseverance through the rain. The former charmed us with a variety of genres of music until 2am when Ransom took to the deck. Hip Hop dominated his set and by 3.30, when he left the stage, my cohort and I were sweaty in our heavy raincoats from our hours of dancing. But, we were hugely satisfied.

We danced a little more to some kind of trancy electro emitted by Scattermusic Sound System but eventually succumbed to the rain, which had been dampening our spirits on and off all day.

Sunday dawned surprisingly bright and sunny, and news of Melbourne’s storms hadn’t quite reached the preoccupied Golden Plains crowd. So, we breakfasted, grabbed our eskies and our chairs and headed for the amphitheatre once more. 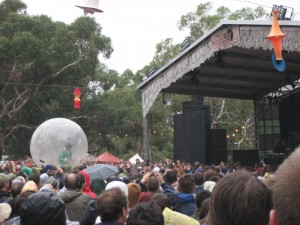 We arrived in time for Jeffrey Lewis and the Junkyard, who were popular, and stayed for Wooden Shjips and Space Invadas. Wooden Shjips were a highlight of the festival and their brand of indie pop was bright enough to match the sunny day.

Nashville Pussy was next, bringing so much attitude to the stage that the crowd really got into them. Their female bass player and guitarist, both long haired and tattoed, rocked out while the grizzly haired lead singer demanded that we worship rock ‘n’ roll.  And, worship we did.

Dirty Projectors, who followed, took a completely different tack with their folksy indie pop and despite the huge contrast, the crowd loved them nevertheless. It was hard to stand still when all I wanted to do was dance, despite the steady rain that was falling.

Between sets, a responsible sounding voice echoed around the amphitheatre. He told us to expect severe storms, hail, wind and rain and that we should shelter in our cars when the time came. Despite a collective sense of foreboding, the storms weren’t as bad as predicted and rain did little to dampen the spirits of excited punters.

We stood in the dark and the rain while we watched Tame Impala, Calexico, The Cruel Sea and Midnight Juggernauts and despite almost freezing to death, complaints were few and far between. 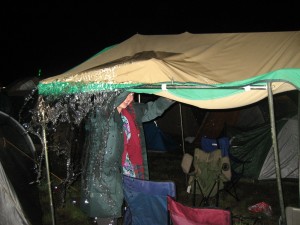 Tame Impala were, as usual, at their psychedelic best while they strummed the crowd into a frenzy of glazed-eyed swaying and flailing limbs. Calexico was apparently fantastic but unfortunately, I elected to traipse up to the tent and retrieve and esky full of drinks, which in itself was eventful as I negotiated the ankle deep mud on the steep inclines. Thank gosh for gumboots.

However, I returned in time for the Cruel Sea who I immensely enjoyed and by the time the Midnight Juggernauts ventured onto the stage I had negotiated my way through the crowd to the front barrier. As the crowd behind me ebbed and flowed in time to the waves of music, I was squashed against the fence. But, as I looked backwards upon the see of dripping, hooded faces, I thought to myself how wonderful live music is.

After the Juggers, when I got my second wind, I boogied to Opulent Sound and Gaslamp Killer before retreating to the campsite for even more beer. Unfortunately, my exhaustion got the better of me and I didn’t make it back down to the stage.

As I drifted to sleep on my thin and vaguely damp mattress, I could still hear the thumping of the bass and imagined those that were still out there, powering through the rain and in the mud.

When the morning dawned grey and drizzly, I looked forward to getting home to a warm shower, clean clothes and a soft bed. However, packing up to leave a place of great memories, new friends and an all day sausage sizzle, thanks to the Meredith community tucker tent, is always hard.

Kelly Theobald is an editor of Upstart and a Golden Plains veteran. This piece was originally published on her blog, Music Meets Girl.