Property and livestock affected by out of control fires over the weekend. 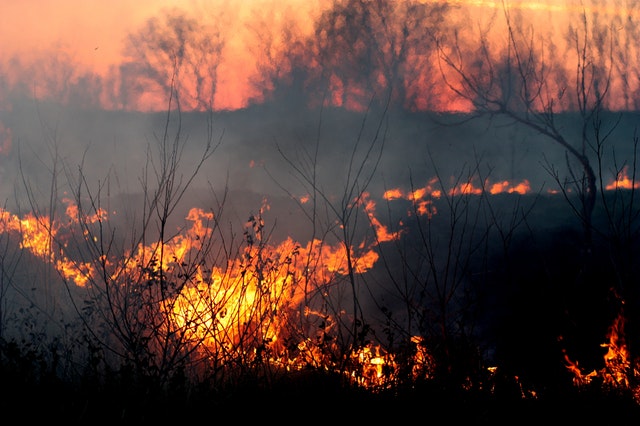 At least 18 homes have been lost in the state’s south-west over the weekend in the worst fire emergency to hit the state this fire season.

280 firefighters and 29 aircraft are still working to extinguish four grassfires that remain at watch and act level around the areas of Terang, Camperdown, Penshurst and Cobden. Cooler conditions and the absence of high winds are expected to assist firefighters for the remainder of the day. 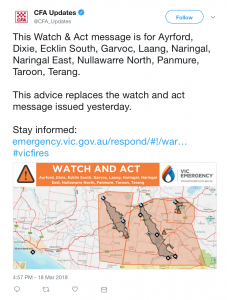 Emergency Management Commissioner of Victoria, Craig Lapsley, said the bulk of the danger had passed and that the focus would now turn to communities affected by the disaster.

“They’re hot, they’re active fires but we’re getting on top of them – today is about understanding the well-being of the community and getting people back into their communities,” he told the Herald Sun.

The Insurance Council of Australia declared the fires a catastrophe on Sunday evening, giving priority to those affected. The state government also announced that they will provide a $1,900 immediate personal hardship grant.

So far approximately 40,000 hectares of land has been burnt out, consuming sheds and farm machinery, as well as hundreds of beef and dairy cattle.

Police Chief Commissioner Graham Ashton said police would investigate the cause of the fires, but indications suggest they were ignited by lightning strikes and fallen power lines.

CFA Assistant Chief Commissioner for the south-west region, Rohan Luke, told The ABC firefighters experienced some of the toughest conditions they’ve ever seen.

“The fires ran extremely hard in 90 kilometer an hour winds, one of the hardest efforts in firefighting is chasing fires in the dark, in rough terrain with extreme weather.”

“I’ve had feedback from some of my members today, that are seasoned veterans, and they’ve said this is the hardest fire that they’ve had to fight, in their memory,” he said.

In an interview with ABC television this morning, Mr Lapsley said there had been minor injuries reported, but no deaths, missing people or critical injuries.