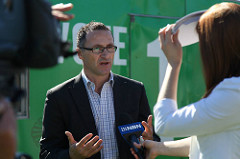 Leader of the Greens party, Senator Richard Di Natale, admits that the internal problems of their party was the major factor in the Batman by-election defeat.

Stating that their own party members were involved in controversial leaks against candidate Alex Bhathal, Di Natale said there should be no place in the party for the people who played dirty politics against their own member through “leaking and sabotage”.

“This unacceptable behaviour of some party members has pushed our voters to think about the other options,” as reported by The Guardian.

On the weekend, Batman’s by-election was won by Labor’s Ged Kearney over Bhathal, the favourite to win the electorate seat.

This victory has made her the first female MP in Batman, and boosted the percentage of women in the federal parliament to 42 per cent.

Kearney gained 54.6 per cent of the votes, with a 3.6 per cent swing, which helped her claim the win in Batman, an electorate that Labor has only lost twice since 1910.