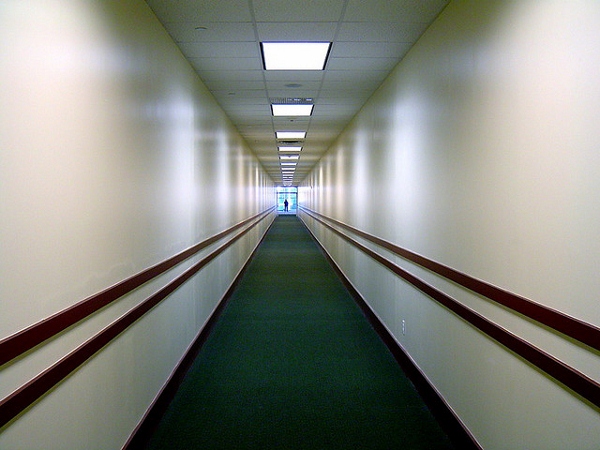 A week in politics is an eternity, or so the saying goes. But my recent experience couldn’t have been more different – two days spent in the nation’s Parliament as part of upstart’s Canberra internship were nought but a blur.

The most immediately striking aspect of visiting Parliament House is how open the building is once you pass through the initial security check. On television, politicians are always seen giving door stop interviews and then returning to some kind of hallway-bound sanctuary, or are filmed from afar as they slink from office to office.

In reality, these apparently invisible barriers that prevent the press from following politicians into the bowls of Parliament House are actually non-existent.

I wasn’t game to test the limits of where my visitor’s pass would carry me but it was difficult to find areas that seemed off limits.

Within minutes of entering the building you’re bound to spot many recognisable faces, but there is something alien about seeing them in this environment. Outside of Parliament, politicians tend to be sighted when flanked by a crowd of aides, journalists, cameras and curious spectators.

In Parliament House, they simply go about their business unbothered; there is a strict unspoken rule not to approach politicians outside of their office, presumably so they can actually get some work done.

Sitting in a hallway while some of Australia’s most powerful politicians wander by renders a bizarre revelation: as much as it is a place of work, Parliament House serves as some form of wildlife sanctuary for our elected officials. Being able to freely stroll throughout this sanctuary is an unspeakably surreal experience.

The building itself is a maddeningly beautiful place, containing both an outstanding collection of Australian art and an array of uninspiring, functional architecture. You’ll never realise how evocative the term “the halls of Parliament” is until you’ve wandered directionless and lost through the scores of identical, whitewashed corridors that lattice the various wings of the place.

Amongst the extensive list of business conducted each day, question time provides the centrepiece around which everything else (at least in the Lower House) is planned. It provides politicians with an opportunity for flexing and phlegmatic debate, and almost always delivers something colourful for the evening news.

Our visit was no different – as Bob Katter made an abortive attempt at a filibuster to clear his name and was promptly ejected from the chambers. Manager of Opposition Business, Christopher Pyne and a host of backbenchers also befell the same fate during the two sessions we witnessed.

In reality, it’s not fire-and-brimstone screaming for the full hour of questions; it’s during the natural lulls in proceedings (often during the poorly camouflaged stump speeches provided by Labor’s own questions) that the smaller details begin to stand out.

Most striking is the overwhelming sense of boredom that descends on the parliamentarians during these lulls. These are especially visible in the body language of the many neutered Labor backbenchers currently serving penance for apparent insubordination.

Although, there are other notable high points that jump out during days spent in Parliament House – such as Senator Barnaby Joyce’s jocular press conferences – nothing can match even the briefest of opportunities to interview a federal politician. Not only do they allow for the rare chance to get some face time with the nation’s leaders, but they also provide access to the innermost sanctums of Parliament – the politicians’ offices.

It’s clear that a significant amount of thought is put into the decoration of these offices, perhaps in an attempt to escape the monotony of the hallways that contain them. Malcolm Turnbull’s headquarters contains a series of tasteful paintings and sculptures (a fitting environment for the nephew-in-law of Australia’s most famous art critic), whilst Labor Senator Doug Cameron’s is plastered with union memorabilia. The most surprising revelation came within the office of Mal Washer, a working GP who keeps a set of dumbbells on his shelves.

Observing the journalists who have spent some time working within Parliament, it’s clear that the naive, goofy awe that defined my visit is destined to pass. For the Press Gallery, it’s a job, and clearly a pretty strenuous one at that if the grim, tired faces are any indication. But there can be no doubt that it’s an extremely exciting place to visit or work, and it’s one that I was extremely reluctant to leave.