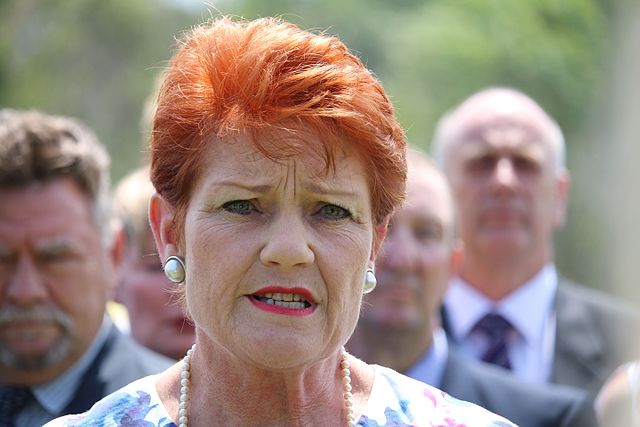 One Nation leader Pauline Hanson has found herself in hot water once again implying that the Port Arthur massacre was a government conspiracy.

“An MP said it would actually take a massacre in Tasmania to change the gun laws in Australia,” she said in Al-Jazeera‘s How to Sell a Massacre documentary.

She continued to reiterate her point and poke holes in the shooting by urging the reporter to investigate her claims.

“Haven’t you heard that? Have a look at it. It was said on the floor of parliament. I’ve read a lot and I have read the book on it, Port Arthur. A lot of questions there,” she said.

“Those shots, they were precision shots … they didn’t muck around,” she said.

The Port Arthur massacre occurred on 28 April 1996 and left 35 people dead along with 18 injured after a lone gunman opened fire at the tourist hot spot in Tasmania.

The event was a turning point in Australian history with then prime minister John Howard initiating a gun buyback scheme shortly after the tragedy.  The scheme was enacted in October that year in hope to reduce the chance of a similar event occurring again in Australia.

In an article back in 2016 to the Sydney Morning Herald, the former prime minister expressed his desire to make a change in Australia.

“I couldn’t believe that something of this magnitude could happen in Australia. I thought, I have this huge majority, we have elected a new government and we have to do something,” he said.

His radical actions led to a shift in the mentality of many Australians with around 650,000 guns surrendered over the course of the year.

With many Australians still opposed to guns, an investigation recently released by Al-Jazeera, showed One Nation leader Pauline Hanson and other senior staff discussing their desire to reduce the strict rules and regulations around gun control in Australia, after approaching America’s National Rifle Association for funding.

Along with her conspiracy theory comments, the undercover operation highlighted that Hanson’s party sought a whopping $28 million donation from the US gun-lobby, creating grave controversy in Australia’s political landscape.

Many politicians are up in arms about her controversial comments, calling her out for her outrageous remarks.

Brian Mitchell, the Labor MP for Port Arthur has made his stance clear saying that he believes Hanson should no longer be a part of parliament in an article in the ABC.

“Pauline Hanson is not fit to represent the Australian public, in the Senate in the parliament or anywhere,” he said.

“She’s a disgrace, she’s an absolute disgrace and she has no place in the parliament,” he said.

Given Hanson’s controversial nature many people are calling for Prime Minister Scott Morrison to take a stand against her with Federal Labor MP Andrew Leigh encouraging the PM to do something.

“If Scott Morrison was a strong leader he would follow the example of John Howard and put One Nation last, where they belong, in every contest and every candidate, Liberal and National,” he said to the ABC.