After the completion of a university degree, a number of students are left without any practical experience and no sense of direction. However, this was not the case for Lauren Wood, who sought after work experience during her degree and is now reaping the rewards.

Her list of achievements are wide, having had her work published in The Age, AFL Record, Fox Sports, Inside Football, EFL Media, mX and the Herald Sun. 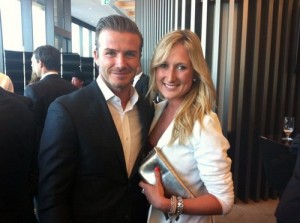 When asked about her smooth transition from university to full-time work in the media industry, Wood believes it all came down to gaining experience, even if it meant voluntary work.

‘A lot of hard work and a lot of working for free,’ says Wood.

‘In my final year of study I decided I needed to do something about my lack of on-the-job experience, so I wrote about 30 letters to various media organisations outlining my studies and how keen I was to gain more experience.’

Prior to starting her final year of university, she spent two weeks at Inside Football, a weekly AFL magazine. At the conclusion of the two weeks, she was offered a part-time position with the magazine for the remainder of the year.

While writing for Inside Football, Wood says she experienced the most exciting part of her career thus far — reporting on the 2010 St Kilda v. Collingwood grand final.

‘I have covered two AFL grand finals for Inside Football, one of which being the drawn grand final between St Kilda and Collingwood. Being a Saints supporter, it was an amazing experience to not only to see my team in the grand final, but to also be in the rooms afterwards seeing how things work behind the scenes.’

When discussing important elements to her succession from university, she regularly mentions the requirement of building relationships with people in the industry.

‘It’s pivotal to be building relationships the entire time. Chances are they might not remember a particular short news story you wrote, but they might remember your face and how personable you are.’

This has proved to be an important element of her career and was essentially the way in which she received her current position at mX newspaper.

‘After ten months in the job (as an EFL media manager), I received a phone call from a sports editor at News Limited who remembered me from my time at the Herald Sun, which shows the value of work experience’

Wood believes working as a media manager at the Eastern Football League (EFL) proved helpful in her career aspirations.

Throughout her ten months at the EFL, Wood gained experience in print, radio, television and media management.

‘I gained so much experience at the EFL in all areas of media and also building my confidence. Any first full-time job is going to be invaluable, but this one in particular really helped me build my skills.’

Wood constantly mentions the volatility of the industry and says it is necessary to go above and beyond.

‘Some people just aren’t willing to work for free, but given how tight things are in the industry at the moment, you really need to show how keen you are. Be persistent, but not annoying.’

When asked about her studies at Monash University, Wood says taking into account the condition of the media industry was crucial in deciding her chosen course.

‘I had always taken a particular interest in journalism, but given how volatile the industry is, I combined it with a business and commerce degree just to have a bit of a back-up.’

Throughout her journey, Wood says there are a number of people who have positively influenced her career, but she singles out her parents in particular.

‘My parents have always had great bearing on the path I have taken and have always been extremely supportive of me. My dad has always had a really strong influence, always taking us along to plenty of events and getting us involved in heaps of different sports, so that’s probably where it started.’

Although working in the media industry has allowed Wood to meet a number of high-profile athletes, it is true that at some point in time, everyone gets star struck.

Her current twitter photo features soccer great David Beckham, who she met prior to a friendly match between LA Galaxy and Melbourne Victory this time last year.

‘I was really nervous but finally I plucked up the courage to ask him for a photo,’ says Wood.

‘I’m just lucky the photo turned out OK, as I would never have had the courage to ask for another one’

After several years of hard work and persistence Wood says she is content with her current position in the industry and the way it all panned out.

‘If someone had told me two years ago this is what I would be doing, I wouldn’t have believed them at all. So I’m happy just to ride it out and see where it takes me, because you really never know’

Blake Gray is a first-year Bachelor of Journalism (Sport) student at La Trobe University. You can follow him on Twitter: @blake_gray14