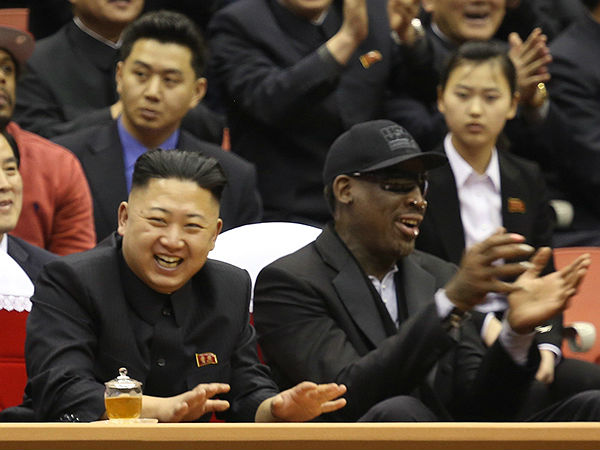 When reports emerged that NBA Hall of Famer — and controversial haircut-extraordinaire — Dennis Rodman was set to embark on a diplomatic mission of sorts to North Korea, laughter was the only acceptable initial response.

That isn’t designed to be a knock on Dennis, but it must be acknowledged that away his from astute ability to clean the glass and start a transition fast break, he’s lived something of a cultured life – complete with wedding dress book signings, Madonna affairs, Carmen Electra nuptials and World Championship Wrestling.

It’s that chequered past that has led to Rodman’s Korean expedition being widely panned by US media – especially by ABC This Week host George Stephanopoulos seemed extremely annoyed that the NBA champion made the trip, and accused Rodman of “propping up” Kim Jong Un’s regime.

But getting beyond the initial perplexing nature of Rodman being America’s foremost expert on all things Kim Jong Un, the presence of sport as an olive branch in frosty US foreign relations is hardly a new thing. Four decades ago, when China and the United States weren’t exactly on speaking terms, it was famously Ping Pong that helped thaw the icy relationship between the two superpowers.

One year after an eleven-strong table tennis delegation made the trip, President Richard Nixon followed suit — becoming the first Commander in Chief to visit Mainland China while sitting in the Oval Office — marking the end of a 25-year separation.

Does such historical precedent suggest that President Obama is planning on laying out the White House welcome mat for Kim Jong Un? Not necessarily.

However, it does suggest that maybe there’s an attempt to find some middle ground between the nations, poised seemingly on the brink of a cataclysmic, nuclear-powered war.

It's true, I'm in North Korea. Looking forward to sitting down with Kim Jung Un. I love the people of North Korea. #WORMinNorthKorea

To utter a phrase I never thought possible, Dennis Rodman might just be onto something here.

And, although the aforementioned shared love of hoops is only one miniscule measure of shared ground between the two, its cultural significance is colossal when compared to how it resonates in contrast to Ping Pong’s positioning in the collective consciousness of those United States.

“I’m not a diplomat,” Rodman said.

Again, the five-time NBA champion is correct. However, he could be an icebreaker.

But, as much as supposedly serious analyst across the United States want to dismiss “The Worm” and his trip, this is just another example of the very real, very perplexing role basketball has played in the bizarre, you-can’t-make-this-stuff-up diplomatic relationship between Washington and Pyongyang for 25 years.

Rodman’s circus-like stopover is the most recent chapter in a story crafted out of the hoop dreams of North Korea’s first family.

And, despite many people considering that North Korean/US relations have deteriorated to a point where they are unsalvageable, perhaps the still relatively-recent ascension to power of Jong Un provides the world with an opportunity.

Having grown up watching the NBA with his equally addicted old man, Jong Un’s interest in basketball became an obsession after attending boarding school in Switzerland between 1996 and 2001. He was fulfilling a life-long dream by sitting courtside with Rodman.

But, to steal a sporting term, the window for potential peace is closing, with the countries moving closer to the brink of war seemingly with each passing day. Now is the time for Obama to engage Jong Un in a little game of diplomatic one-on-one.

And, who knows, maybe one day Kim Jong Un will be planning a visit of his own to Washington, of course taking into account when the Bulls were going to be in town.