In the current political climate, a time when a majority of people are cynical about politicians and consider them to be only slightly more trustworthy than journalists, it is comforting to discover a man who is wholeheartedly embraced by his electorate. 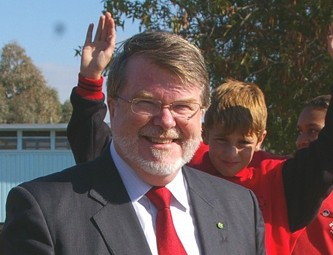 Labor’s Harry Jenkins was first voted in as Scullin’s Federal MP in 1986, succeeding his father who had held the seat since 1969. The much admired and respected Jenkins is now the longest-serving Labor member in the House of Representatives and the second longest-serving Member of Parliament.

And his popularity is not fading. He won the 2010 election by a mammoth margin of 22.25 per cent. The seat of Scullin in Melbourne’s north has become synonymous with the Jenkins name and the family are very much part of the community.

‘The Jenkins family have lived in the local area for over three generations and have always been active in the local community,’ says Lori Faraone, a member of Jenkins’ staff.’

‘Harry’s dad was one of the first and only medical practitioners in the local area,’ says Faraone. ‘Harry’s mum is a former councillor of the Shire of Whittlesea and has also always been very active in local community organisations, most recently with the Lions Club.’

With his parents providing the intellectual playground for the young Jenkins, a career in politics was inevitable.

Jenkins began as a public servant after graduating from the Australian National University with a Bachelor of Science. Since then, Jenkins has consistently ticked all the right boxes during his twenty-six years in politics.

In 2007, Jenkins was made Speaker for the House of Representatives, a role that allowed him to demonstrate his commanding and well-spoken manner to a national audience.

However, his resignation as Speaker in November 2011, and the now infamous appointment of Peter Slipper, caused a stir in Australian politics.

Though many saw the switch as a political manoeuvre designed to give Labor additional numbers of the floor, Jenkins maintains that his role as Speaker distanced him too far from Scullin.

‘My desire is to be able to participate in policy and parliamentary debate and this would be incompatible with continuing in the role of Speaker,’ Jenkins told the House in his final address as Speaker.

Whatever the true reasons behind Jenkins’ resignation, it has indeed allowed him to return to his roots. And Jenkins has wasted no time in delivering on his promises to the Scullin community.

Jenkins immediate focus was the Northern Health Teaching, Training and Research Precinct, a project that will provide up to 665 student placements within health related areas such as medicine and nursing.

According to Executive Director of Northern Health, Robert Burnham, the project will also improve health outcomes for the local community and reduce the burden of chronic disease.

‘Harry Jenkins and our local state politicians have been very supportive of this project primarily as it contributes permanently to the local infrastructure both from a social and economic perspective,’ says Burnham. ‘Harry has always been accessible and friendly to deal with.’

Likewise, Principal of Merriang Special Developmental School, Helen Halley-Coulson is full of praise for Jenkins’ efforts in securing funding for the opening of the school’s new Middle and Later Years campus.

‘He actually got $2 million dollars, out of a $5 million dollar project. He was involved right from the beginning when the Building Education Revolution funding became available,’ says Halley-Coulson. ‘I think he felt we deserved more so he actually got double the amount of money that we were actually entitled to. We were really excited about that.’

The new facilities available at Merriang School’s Lalor campus will allow the school to run programs on site, something it was not able to achieve previously. Halley-Coulson believes the support of local politicians, such as Jenkins, is ‘absolutely critical’ in turning initiatives like this one into a reality.

‘If you don’t have the support of your local politicians, it’s extremely difficult, in my field, to get anything done,’ says Halley-Coulson.

Jenkins’ next projects are the building of the Peter Lalor Trade Training Centre and the completion of a GP Superclinic in South Morang.

Getting things done and helping the working class and those less fortunate is core to Jenkins’ philosophy as an elected member of parliament.

In his first parliamentary address, Jenkins stirringly quoted from the writings of James Henry Scullin, the ninth Prime Minister of Australia: ‘Justice and humanity demand interference whenever the weak are being crushed by the strong’.

And to this day he remains a passionate supporter of disadvantaged groups, campaigning for Indigenous health, education, and improving the lives of families and the elderly.

‘The Labor Party seeks to represent working people, which is pretty much what the electorate is made up of, but the Labor Party also seeks to help people less fortunate,’ says Jenkins staffer Lori Faraone. ‘And the work Harry’s done in the electorate has always been about ensuring that this area gets its fair share of benefits and that people are helped.’

His ongoing commitment to ensuring his electorate gets its ‘fair share’ has allowed Jenkins to be embraced by his electorate. And Jenkins, in return, has become an integral part of Scullin’s community.

With passion and integrity, Jenkins has worked hard to build a genuine bond between him and his people. And little by little, he is improving the standing of Australian politicians nationwide.

Isabelle Laskari is a student at La Trobe University.

To view profiles of some of the other backbenchers as part of upstart’s Backbench Insiders project, click here.