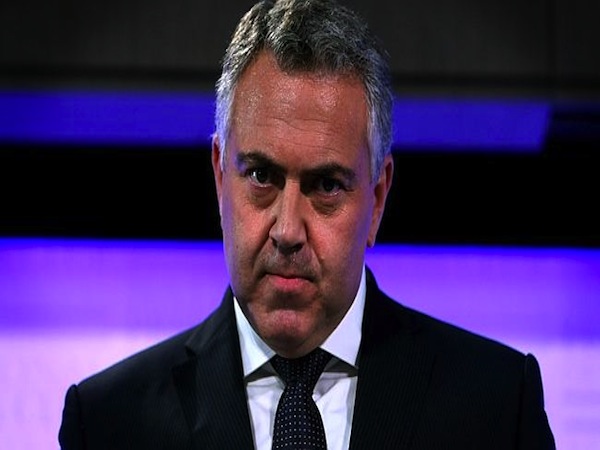 There is no denying that this year’s federal budget was going to be a hard-hitter. All the pre-budget speculation pointed towards increased taxes, reduced welfare and a stranglehold on government spending.

It was the budget we were supposed to have and Treasurer Joe Hockey certainly delivered a colossal kick up the backside to the Australian people when handing down the nation’s toughest budget since 1996.

This year, the government has opted to prioritise economic wellbeing over election promises. The treasurer calls it the age of opportunity, with government spending and handouts to be reigned in while Australians from all walks of life are asked to work harder, longer and give more in taxation.

The nation’s wealthiest will shoulder a significant amount of the costs through a three year “deficit levy” involving a two percentage point increase in the amount of income tax paid by those earning over $180,000.

The government is also doing it’s bit by looking into the sale of public assets such as MediBank Private and the Australian Mint whilst also freezing foreign aid payments over five years in the hope of coming up with a $7.9 billion saving.

It is also pursuing a policy of smaller government by cutting 16,500 public service jobs and either merging or abolishing 70 government bodies including the National Water Commission and the Australian Customs and Border Protection service.

Businesses will not be spared either with the treasurer’s budget speech confirming that despite a 1.5 per cent reduction in company tax and subsidies for hiring older workers, corporate welfare will be cut by $845 million in the hopes of encouraging innovation and self reliance.

But the brunt of the cuts looks set to be borne by those who are often unable to contribute.

Australia’s most vulnerable groups including young people, pensioners, students and families are facing the probability of higher costs for healthcare with a $7 patient contribution to be added to approximately 70 per cent of Medicare services.

This will include everything from simple GP visits to specialists and pathology.

Adding insult to injury, the government is planning to withdraw $15 billion from hospital funding by 2024 as part of a wider plan to cut $80 billion worth of health and education funding in the next decade.

This breaches both a key election promise and several funding deals with the Australian states and territories.

“A AAA-rated Budget does not justify deep cuts on the Australian fabric of society.” @Bowenchris #auspol #budget2014 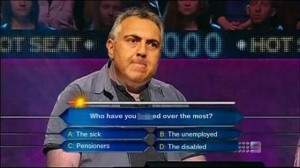 (Images like these appeared across social media on Tuesday night amidst a flurry of budget fury.)

Secure retirement is also in jeopardy with the much-anticipated increase to the pension age (to 70) confirmed on Tuesday.

In addition, Australia’s 3.7 million pensioners are also set to face a rise in the cost of living, as pensions will be indexed to inflation rather than incomes by 2017. This means pension payments will be determined by the amount of spending in the Australian economy.

The government has also cemented its desire to get as many people as possible back into the workforce by trimming the availability of welfare.

Single parents and families will take the biggest hit here payments under the Family Benefit Tax B to be capped at a $100,000 threshold income, down from $150,000 and will be cut off altogether once the youngest child in a family turns six leading to a projected saving of $1.9 billion.

Families will also feel under the pump at the bowser with the budget stipulating a $2.2 billion rise in revenue by 2018 as a result of the reintroduction an excise on fuel.

The fuel tax is likely to add to voter uncertainty because like the pension, the amount of tax charged on fuel will be determined by the constantly fluctuating inflation rate.

Australia’s youth are also in the firing line, as job seekers under the age of the 30 will soon have to wait six months before receiving any unemployment benefits under a strict “earning or learning” policy.

But this budget is going to make it harder to learn as well with universities to begin setting their own tuition fees by 2016. Interest charged on HELP loans will climb to 6 per cent and courses will likely become more expensive with the potential for competitive bidding wars for course places.

However in a rare glimpse of positivity, Joe Hockey seems to have taken care of students who choose to study diploma and bachelor degree courses at approved higher education institutions such as TAFEs and private colleges.

Here students now receive financial assistance, no longer one that is exclusive to those studying at mainstream institutions.

Furthermore provisions have been made to grant apprentices and trainees up to $20,000 over a four-year apprenticeship. The government hopes this will lessen the divide for students between the choice of formal education and trade.

Treasurer Joe Hockey said in his speech to parliament, “ We give people loans to help them complete a university course, so it is only right that those completing a trade qualification get a fair go.”

The voter backlash over this year’s budget has been swift and fierce, particularly given the number of election promises that appear to have been broken by many of these initiatives.

But the heavily publicised negativity seems to have detracted from some very promising positives to emerge from this budget, particularly in infrastructure.

The federal government has already committed $39 billion towards infrastructure around the nation by 2019-20, but this budget has gone a step further by adding an additional $11.6 billion infrastructure growth package.

Of this money, $3.7 billion will be dedicated towards upgrading roads and highways across the nation including stage 2 of the East-West link in Melbourne, the North South Corridor in Adelaide and the Perth Freight link.

A further $2.9 billion will be invested over 10 years to upgrade roads in Western Sydney as well as a further $2 billion to upgrade the major roads connecting the Sydney CBD to the West.

The Commonwealth also plans to use a $5 billion asset-recycling fund to encourage the states and territories to sell assets and invest the proceeds into future infrastructure to the tune of $40 billion.

The government has also struck a winner with the announcement of a $20 billion Medical Research Future Fund – potentially the largest of its type in the world – to be financed by the new Medicare co-payments.

Yet it still remains to be seen whether the electorate will see any benefit in these positive initiatives when so much fear and focus has been built up around the negatives.

It may take voters some time to see through the hardship and broken promises and appreciate the commendable forward thinking Mr Hockey seems to have taken with his first budget.