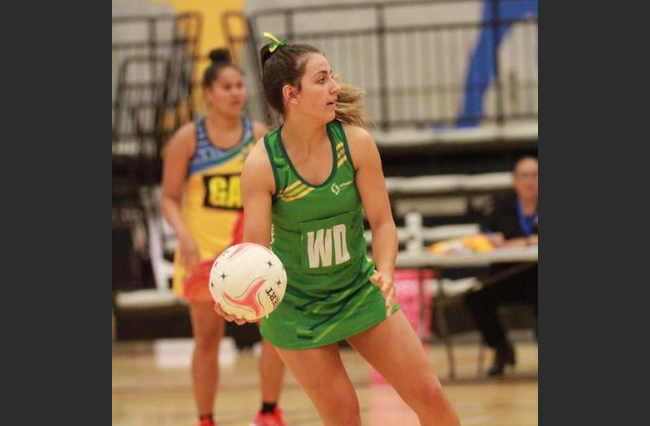 The sound of netballs bouncing across wooden floorboards can be heard from the carpark of Eagle Stadium, Werribee, as a collection of athletes from across Australia begin to line up on the goal-line to start their warmup drills. Minutes before the beginning of play, the members of the Victorian netball team approach the bench, aligning their drink bottles and sweat towels.

As her coach begins to call out the names of the starting team, 17-year-old Holly Garac, of the Mornington Peninsula, nervously waits to hear if she’s made it on for the half.

Now, a week later, she sits in the same seat, hearing her name on the list of athletes being called to represent Australia.

The 17-year-old athlete has always participated in a multitude of sports; whether it was golf, tennis, athletics or netball, she has never been one to shy away from competition. From a young age, she knew she wanted to pursue a career in sport.

“I didn’t know what type, but I knew I always wanted to be a sportsperson,” Garac told upstart.

“On a normal Saturday, I’d be on the oval running for athletics and then I’d run over to the netball courts, play my game, then go back to athletics.”

Her early participation in athletics has taught her how to jump, throw and run with proper technique, ensuring she is equipped with the tools needed to transfer skills between sports.

“Athletics really gives you the fundamentals to be able to do any other sport,” she said.

“Physically being there for them and watching their events made them feel really good,” she said.

Supporting others, whether they’re her competitors or teammates is natural for the teen. Her teammate, Kacey Maund, is familiar with Garac’s encouraging attitude.

“[She] lifts everyone up to be their best, and provides positivity to others,” Maund told upstart.

Netball has been a big part of Garac’s life since she was nine.

“Without netball, I don’t know that I’d be the person I am today,” she said.

“When you first represent your state, the feeling is unreal. You’re like ‘Oh my god! I’m playing for Victoria,’” she said.

One of Garac’s greatest triumphs was being selected in the School Sport Australia Netball Team in 2018.

“I remember that day, it’s probably the highlight of my career just hearing my name being read out.”

Garac says she shed tears with her family after she made the team. Her mother, Monica, thought she played well enough to be in with a chance to make the Australian team, but it was a “surreal feeling” when she actually made it. The team competed in New Zealand in June 2019, making the grand final, only to go down by one goal. Garac played wing attack, instead of her usual wing defence position, as the opposing players were larger in height and size.

“I needed to step up because our wing attack was quite small,” she said.

As disappointing as it was to lose by one, the young star says she’s a person who’s okay with losing.

“I don’t get upset about things like that, we weren’t the best team on the day and we still made it to the finals. It’s just hard being on court for the loss because you feel responsible,” she said.

This year, the young athlete moved from the Peninsula Waves to the Wilson Storage Southern Saints, affiliated with the St Kilda Football Club. Managing to train weekly via zoom, she says she has felt very welcomed by the club and has already established a bond with her new teammates. Amanda Holt, Garac’s new coach, says the teen is an athlete with an incredible amount of motivation, who is committed to the process of developing and challenging herself.

“Her willingness to learn, to trust her coaches and teammates, to remain humble whilst setting very high (and entirely appropriate) expectations of herself is inspiring,” Holt told upstart.

Having to learn and grow in a new environment with strangers can be difficult, but not for Garac. The numerous coaches, clubs and teammates she has experienced in the first few years of her budding career have all helped her to grow in different ways.

“Being comfortable in one spot is never going to help you improve,” she said.

With the support of her family and friends, Garac says she has been able to balance school and sport with extreme success, averaging in the high 90s for her two favourite subjects; psychology and health. She is completing the Victorian Certificate of Education this year and says next year will be hard for her, because she doesn’t know a life without school.

“All my friends and boyfriend would say I love school,” she said.

She only took four subjects this year, due to the difficulty of balancing school and sport schedules.

“On a Wednesday, I’d get home at 1 o’clock in the morning from netball,” she said.

Holt says she’s had conversations with Garac about balancing the school workload with netball commitments.

“She didn’t want to let the team down but was equally committed to doing her very best with her studies,” she said. “This mature, balanced and collaborative approach best describes ”

At the age of 17, Garac is humbler than most, knowing what it takes to succeed, she’s willing to go above and beyond to edge out competition.

“The little one percenters are so important. I think to myself, ‘What’s my competitor doing right now that I’m not?’ It encourages me to push harder and work harder,” she said.

“Sport has brought me so many memories, so many friends and has given me the start in life that I needed,” Garac said.

Article: Jessica Miles is a first-year Bachelor of Media and Communications (Sports Journalism) student at La Trobe University. You can follow her on Twitter @jessicamiles01