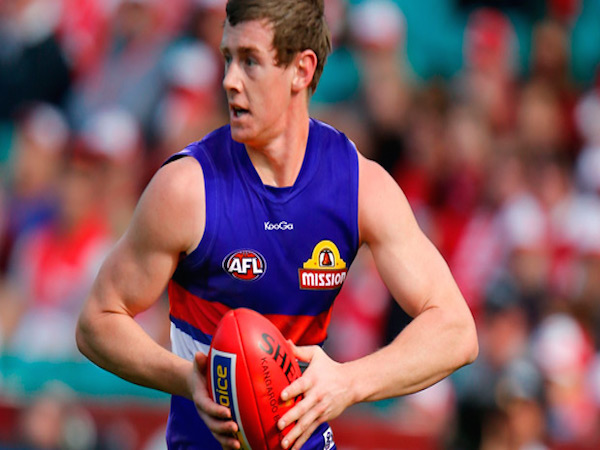 It’s a mere formality for every AFL player to attend an exit interview at season’s end.

An informal sit down with the coach is a time to reflect on a player’s year, and to plan the off-season training program.

For players told they’ve been let go, this mere formality turns into an abrupt end to their AFL careers – they’ve been delisted.

Delisting is a common practice for every club when evaluating their list post-season.

While players know it’s always a possibility, many never expect it to happen to them.

One player who heard those words in his exit interview this year was Sam Darley.

Darley had finished his second season at the Western Bulldogs, after coming from Greater Western Sydney (GWS) in the 2013 trade period.

He tells upstart they were words he never expected to hear.

“It’s a bit of a shock. I tried to prepare myself for the worst but until you hear the words ‘we’re not going to go with you next year’, I suppose you can’t really do much to prepare for that,” Darley says.

“Even now it probably still hasn’t quite hit.”

Darley grew up in Hobart, and after an impressive junior career, made his senior debut for the North Hobart Football Club at 15-years-of-age.

Two years later, he was a priority pick by the AFL’s newest club, GWS.

Darley made his AFL debut in round 8 of the club’s inaugural 2012 season.

But with just a one-year contract offer on the table at the end of 2013, and 13 senior games to his name, Darley looked elsewhere to obtain more security in his AFL career.

“At the time, the Giants had offered me a one-year contract, but being such a stressful industry I was looking for something a little more secure, longer-term and the Bulldogs were pretty keen [for a trade].”

It was the final trade of the 2013 trade period, and Darley was traded to the Dogs in return for pick 78.

He finished the 2014 season with five AFL games, and a “career highlight” VFL Premiership win, but an unusual medical condition derailed his first year in the red, white and blue.

“I’d had three trips to the hospital throughout the year with a twisted bowl. I ended up having to have an operation on that so I missed a fair chunk of footy. It was frustrating. I hadn’t done a hamstring or I hadn’t done a knee or anything like that,” Darley says.

“I had to wait a week to run and being a new club I just wanted to do everything I could to prove myself.”

With a difficult 2014 season behind him, Darley’s 2015 season started strongly in the VFL at half-back.

Averaging 23 disposals in 14 games, Darley’s form may have warranted senior selection in any other side. But with a half-back line boasting 2015 All-Australian’s Robert Murphy and Easton Wood, along with Matthew Boyd and Jason Johannisen, the 22-year-old had to bide his time in the VFL.

It wasn’t until round 20 that Darley got his chance, and despite collecting 21 disposals in three quarters, he was subbed out.

He held his position for the following game, but was dropped the next week despite a consistent performance.

“Footy is a team game but it’s also your career. You’re great mates with some of the guys and I couldn’t have been happier for my best mate at the club, Joel Hamling. He came across from Geelong, and he won best first year player at the club this year,” Darley says.

“There is always that part of you that you almost want someone, and it does sound bad, but you want someone to play poorly so that you might get the chance.

“Playing consistent footy at VFL level, I was racking my brain with what else can I possibly do to get in [to AFL level].

Darley says that while he had a tough season, he feels his hard work will eventually pay off.

“There are certainly tough times but you’d prefer to continually work hard and wait for that chance to come because inevitably it does,” Darley says.

“So it’s definitely frustrating, but I think if I get another chance it’s only going to hold me in good stead in the future.”

This chance may be just around the corner for Darley, with the AFL’s delisted free agency period opening on 31 October.

While it may be a while until Darley knows his fate, he says his strong VFL form may give him another chance at AFL.

“There’s been some reasonable interest from numerous amount of clubs so that’s given me a little bit of light at the end of the tunnel,” he says.

“Probably the reason I’m training so hard at the moment is to make sure that if I do get the chance I’m in really good nick.”

Ryan Rosendale is a Bachelor of media and communications student at La Trobe University. You can follow him on Twitter: @RosendaleRyan.