One Facebook group with over 20,000 members has picked apart Andrews’ quirks to brilliant results. 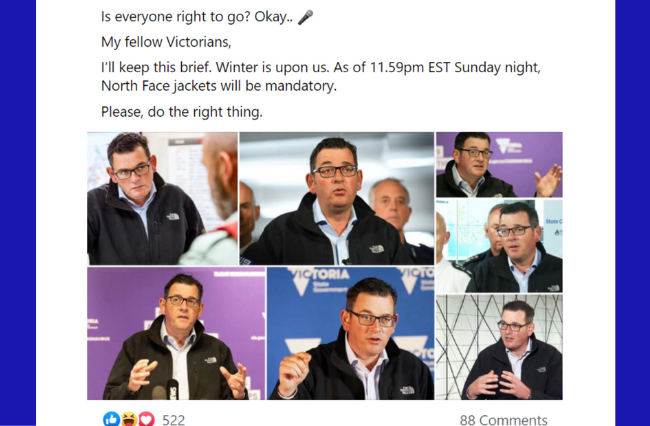 If anything has become as commonplace in Victorians’ lives as Zoom meetings or the phrase “strange and unprecedented times”, it’s the almost daily COVID-19 updates delivered directly from Victoria Premier Daniel Andrews.

Whether it’s a televised press conference or a text post on social media, Andrews has ensured that the public has known the happenings of his government in response to the pandemic since March, when lockdown restrictions first began – just recently reaching the milestone of 50 consecutive appearances.

These updates are received by eager audiences, waiting for the day when a trip to the local cafe or pub won’t land you a hefty fine. However, one part of this audience tunes in for a different reason.

Having garnered over 20,000 members in the past five months, the Facebook group known as ‘a group where we all pretend to be daniel andrews’ [sic] has put a comic spin on the unique way Andrews communicates. 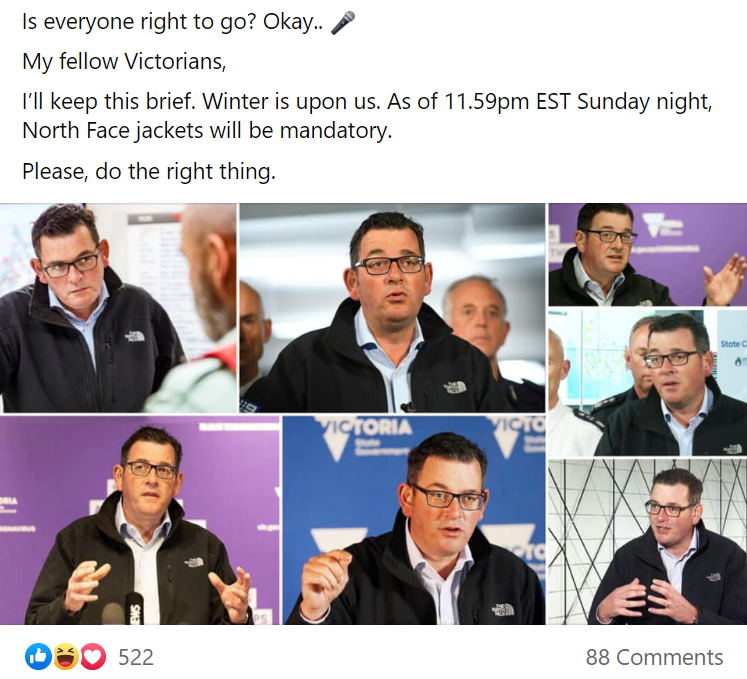 Post sourced from ‘a group where we all pretend to be daniel andrews’ and used under the permission of Tom Vaughan.

Posts typically start with “My fellow Victorians” and include the phrase “It’s the right thing to do” to mimic the premier in an uncanny fashion. This is in keeping with the second rule of the group, “You gotta be Daniel Andrews when posting”.

Tom Vaughan, group creator and admin, told Pedestrian back in May that he was accepting 50 new members every 10 minutes when the group rose in popularity in April.

Now, four months later and with growing COVID-19-related problems prompting more appearances from Andrews, the group has remained as relevant as ever.

Vaughan was inspired to make the group after seeing other Facebook users copy the premier’s posting format in their own posts.

“I thought that it would be a good thing to base a group off, and I guess many other people did too,” he told upstart.

That format, as explained by Vaughan, includes “separating related statements together with a space, and speaking with an authoritative tone”, though admins are rather lax with posts so long as they are funny and related to Andrews.

Yet, some posts are so well-crafted that they can be mistaken for genuine posts at first glance – that is until caging-up lockdown breakers is mentioned. This begs the question: How does one successfully pretend to be Daniel Andrews? 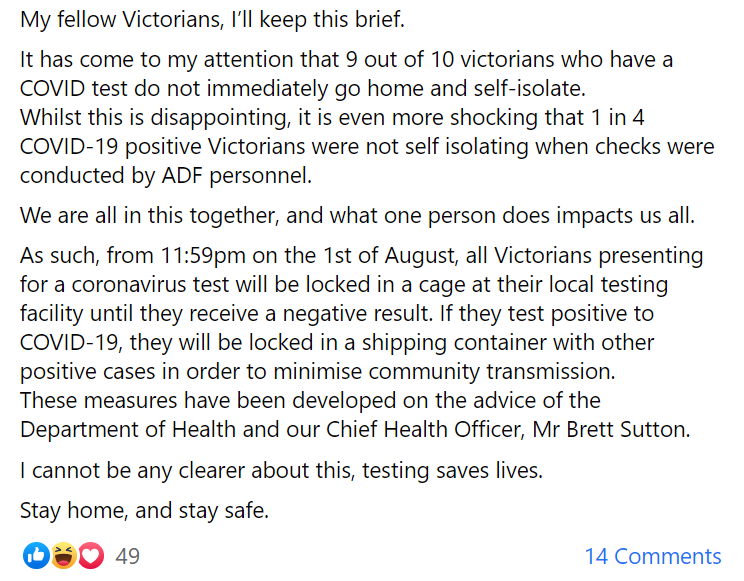 Post sourced from ‘a group where we all pretend to be daniel andrews’ and used under the permission of Tom Vaughan.

Dr Stephen Morey, Associate Professor of Linguistics at La Trobe University, says that Vaughan’s group has picked up on Andrews’ quirks – and the political lingo used by countless others for years.

“Each individual has their own way of talking and we often recognise that we are talking to someone that we know because of the way they speak – or write,” he told upstart.

“The idea of saying ‘My fellow something-or-other’ goes back a long way…You will see that political leaders going back a long way have used terms like this.”

Dr Morey pointed to former Prime Minister Robert Menzies’ 1939 speech where he announced Australia was going to war. Beginning his speech with “Fellow Australians”, this is a prime example of how generations of politicians have used this term. This language – neutral but inclusive – has proved to be useful in building solidarity in times of crisis and Andrews has clearly taken note.

“The use of a stock phrase…is a well-attested rhetorical device,” Dr Morey said. These are used to make the audience think or feel a certain way when giving a speech. Some of Andrews’ favourites have been taken on by Vaughan’s group to better imitate him, from his repetition of phrases to his short, punchy sentences.

With these devices being so common in the language of politicians, Daniel Andrews hasn’t been the only one to have their pandemic responses impersonated.

In April, New Zealand comedian Melanie Bracewell took to dressing up as her own PM Jacinda Ardern, garnering tens of thousands of fans between TikTok and Twitter – one of those being Ardern herself.

This is my life now I guess pic.twitter.com/NH5ICFI0vk

That same month, a moment from an Australian COVID-19 press conference also got the TikTok spotlight, when ABC journalist Andrew Probyn got into a heated exchange with Prime Minister Scott Morrison after asking one-too-many questions.

These impressions are hardly malicious in intent, unlike for some other politicians. As Bracewell told BBC News, “I’m not even really making fun of [Ardern], I’m just trying to be her, because she’s cool.”

That same sentiment is shared in the Daniel Andrews Facebook group, where a poll posted by Tom Vaughan in June revealed that 74.2 percent of those who answered supported the Victoria Premier.

Whether or not group members are fully invested in Victorian politics, Vaughan’s creation stands as a shining example of how comedy can pull people together when outside forces push them apart.

So, if you have a minute and want a good laugh, take a look at this group full of Dans and even have a crack at an impersonation yourself.

Because it’s the right thing to do.

Photo: Post sourced from ‘a group where we all pretend to be daniel andrews’ and used under the permission of Tom Vaughan.