The Ramones aren’t a band that fit neatly into many music tastes. Most of the time, any favourable review of the band will say something about how the band saved rock from the pompous, overblown kinds of music that had become popular and commonplace in the ‘70s. It’ll praise the band for embodying the ‘true spirit of rock and roll’ and eliminating all of the unnecessary fluff. Of course, it will heap at least some praise upon the band for essentially creating punk rock in the US, bringing it out of the proto stage of some ‘60s bands and firmly into its own genre.

There’s no middle ground when it comes to The Ramones. You’re supposed to either love them or hate them, and merely saying ‘well, they’re sort of okay’ just doesn’t seem like a possible perspective. At their best, The Ramones were so extreme, uncompromised, and fervently dedicated to pushing music to its absolute limits of existence that calling them mediocre or passable seems like an insult. They’re either great or they suck: each of these perspectives has a right to exist, dividing music fans all around the world into two equal halves.

The fundamental difference between The Ramones and so much of the rock music of the first half of the ‘70s is that their approach involved answering a different question in creating music than other bands. The prevailing question that many bands asked in making music was: ‘How much can we add, whether through arrangements or complexity or other features, without undermining the music itself?’ The Ramones – even though it likely wasn’t consciously done – asked, ‘how little can we add without undermining the music itself?’

There’s a famous quote that seemingly served as the entire philosophical foundation for the band in its first few albums: ‘Perfection is achieved, not when there is nothing more to add, but when there is nothing left to take away.’ The band pioneered their version of minimalist punk rock: they played at insane speed for their time, kept their rhythm section playing the simplest parts imaginable, made songs that revolved around cycling through a small number of chords, and avoided guitar solos like the plague.

The Ramones were, and remain, a social paradox. On one hand, they put simplicity on a pedestal that nobody before or after them has ever really dared, or been able to. In their prime, the lyrics showed almost no indication of any significant philosophical introspection or of any real awareness of the world outside their immediate sphere. Instead, they focused largely on topics that are stereotypically associated with dead-end teenagers – from reading comic books to watching terrible movies to sniffing glue in order to fight boredom. But The Ramones, even with all that supposed pandering to a common audience, never really found mainstream acceptance. Often referred to as the ‘inspiration’ for innumerable punk and post-punk bands all over the world, they never found true commercial success, definitely not on the same level as their punk brethren from the UK, such as The Sex Pistols or The Clash. 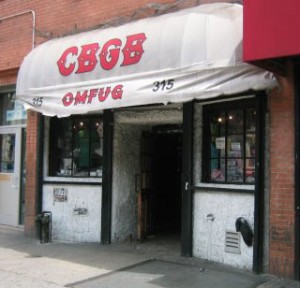 The lack of commercial success may be partially explained by a US music industry fear of true innovation, also seen in actions such as Jimi Hendrix’s US success only being attainable after his success in the UK. Moreover, The Ramones never underwent the same intense marketing as The Sex Pistols. They were simply a bunch of kids who chanced to grow up in Queens and chanced to get together in Manhattan’s musical heart of the late ‘70s, the iconic venue CBGB. They chanced to get a record contract and chanced to hit upon a radically new playing style. That’s all there was to it. No Malcolm McLaren to take care of these guys (and, after seeing the glorious implosion of The Sex Pistols, maybe that was all for the best).

There might have been another reason for the public disapproval of The Ramones. When Britpunks appeared on the scene in 1977, they were carrying a social/political message. Their melodies were crude and unsophisticated, but they were melodies, with a guitar solo here and there; they could occasionally give out a long, sort-of-epic composition and their lyrics pretended at heralding a new social revolution. You could listen to The Pistols and The Clash without losing your ‘intellectual credibility’ – the music was simple, but it was meaningful.

The Ramones had done away with all that way before 1977. Melodies? Yes, there are melodies in Ramones’ songs, based on three or four chords, never evolving, never getting you by their second minute to any place where you haven’t been to in the first. Since that might have made the songs boring, they made sure that the songs rarely went beyond two minutes; for their debut album, two-and-a-half minutes approaches opera standards. Guitar solos? Nowhere in sight, partially because they didn’t like them, partially because they couldn’t play them. Lyrics? The songs on their debut album give a whole new meaning to simple; if you thought Louie Louie sucked, take a look at Beat On The Brat. A message? In your dreams. The closest they ever came to a message on these early records was in the immortal ‘all the kids wanna sniff some glue, all the kids wanna have something to do’. Other than that, the lyrics betray a love for hanging out, making out, watching B-movies and reading trashy comics.

No wonder so many people have always treated The Ramones ‘questioningly’ (to quote a Ramones’ song). A band with no playing potential at all, whose songs all sound the same – three-chord rockers played at frantic speed – whose lyrics could have been written by a five year old. How could such a band make it high up in the charts? There was no way that was going to happen. Instead, people flocked to more mainstream acts such as Fleetwood Mac and Crosby, Stills & Nash. And even when the punk movement in general started to gain commercial success, The Ramones were somehow forgotten by the golden wave.

So why do The Ramones deserve any attention at all? Their influence? Not really, although their influence has been enormous on successive generations of bands. Their haircuts? Certainly not, nobody can honestly admire The Ramones’ public image, although Joey Ramone, the bespectacled bubblegum boy is cool as far as punk heroes go. What matters is their music, or in a way, their ‘anti-music’. 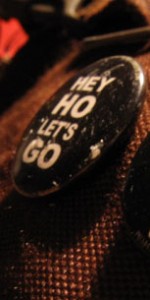 The Ramones were minimalists. Consciously or unconsciously, they found the core of rock music, its bare-bones essence. They stripped it to the bone and showed the world its beating heart, concealed in their chainsaw buzz chords, their one-note bass-lines, their boom-thwack four-four drum pounding and their lead vocalist’s simplistic, yet melodic voice. At heart, these guys were like The Beach Boys, naive kids for whom surf music represented the best escape from the horrors of their everyday teenage life. Yet these guys were tough rockers, and they merged the two extremes in a way that’s never been encountered in any other band. Their early music contains some of the catchiest melodies ever written. It is both extreme avant-garde (for its time, at least) and a perfectly sincere, emotional, involving performance, perfectly accessible to anyone who approaches it with an open mind and heart.

The Ramones didn’t finish right after those initial albums, and unfortunately the tail-end of their history somewhat taints their legacy. The band gradually changed many of the details of their sound and they ended up losing much of their identity. They still made okay music past that point, but their zenith of greatness was rather short overall. Still, when people think of The Ramones it’s the early, swaggering, heyday Ramones that come to mind, and that’s as it should be. The legacy of the band deserves to rest upon the first few albums, those three-chord rockers played at frantic speed , and that brief period in time when the Ramones accidentally changed the music world forever.

George Galanis has completed the Graduate Diploma in Journalism at La Trobe University.