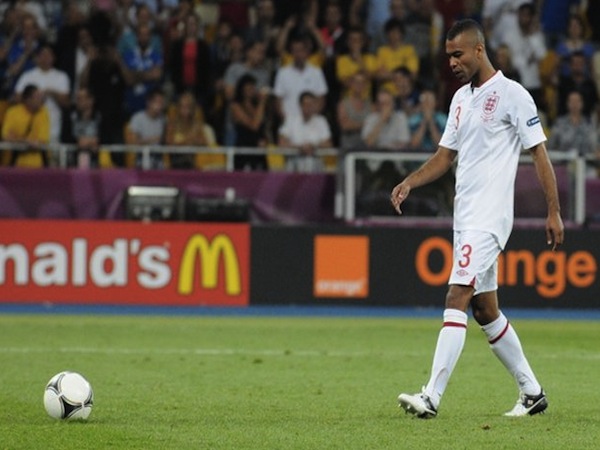 Chelsea full-back Ashley Cole wore the England captain’s armband for the first time during its 1-1 draw against Ireland. Yet, despite over a decade of consistent performances for club and country, he remains an unloved figure by many.

Awarded the captaincy to honour his 100th cap for England, the decision wouldn’t appear to be a source of anger amongst fans. Contrary to such assumptions, Cole has long been considered the epitome of the greed enveloping the world game.

Off the field, Cole has given fans very few reasons to like him.

His autobiography set the tone. Published in 2006, the book painted a portrait of a spoiled man obsessed with money, with Cole complaining Arsenal’s contract offer of £50,000 a week was “taking the p***”.

Since then, incidents such as multiple reports of adultery leading to his divorce in 2008, the shooting of a 21-year-old student with an air rifle in 2011, his constant complaints about the English Football Association’s disciplinary procedure and his playing attitude – often scowling while on the pitch – have done little to rectify his image.

The 32-year-old is seen to have hardly attempted to turn the negative impression and stigmas around. Cole refuses to engage with the media and maintains the media is biased against him, preventing any chance of an in-depth interview where he could have the opportunity to offer his own explanations.

Cole did not take part in the traditional press conference when Roy Hodgson announced him as captain; Chelsea teammate Frank Lampard, a natural and much loved leader, instead took his place.

As a result of Cole’s withdrawal from providing his version of events, few of us on the outside understand whether or not the depictions of Cole’s off-field behaviour by the media are fair and accurate.

However, judging purely on-field performances, there is no doubt he is a fitting leader of the national team.

Cole has been one of the more consistent footballers of his generation. Whether it be for club or country, he has very rarely fallen short of excellence.

Football intelligence is a particular strength.

Hardly found out of position, Cole’s ability to read the play is rivalled by few and is a major factor in why he is rated so highly across the globe. His anger can bubble over at times, but like many champions, Ashley Cole’s harshest critic is himself.

He has also enjoyed a lot of silverware. Winning every trophy available to a Premier League player, Cole is the most decorated player in FA Cup history with seven winners medals, along with three Premier League titles and the 2011/12 Champions League title.

While anyone else with Cole’s successes would have no trouble garnering a broad fan base, it seems English football supporters feel little but disdain towards him.

As long as Cole continues to duck and weave through the press, questions and doubts about his off-field persona are sure to linger.

Matt Goss is a first-year Bachelor of Journalism (Sport) student at La Trobe University. You can read more of his work at his blog. You can follow him on Twitter: @MGoss94