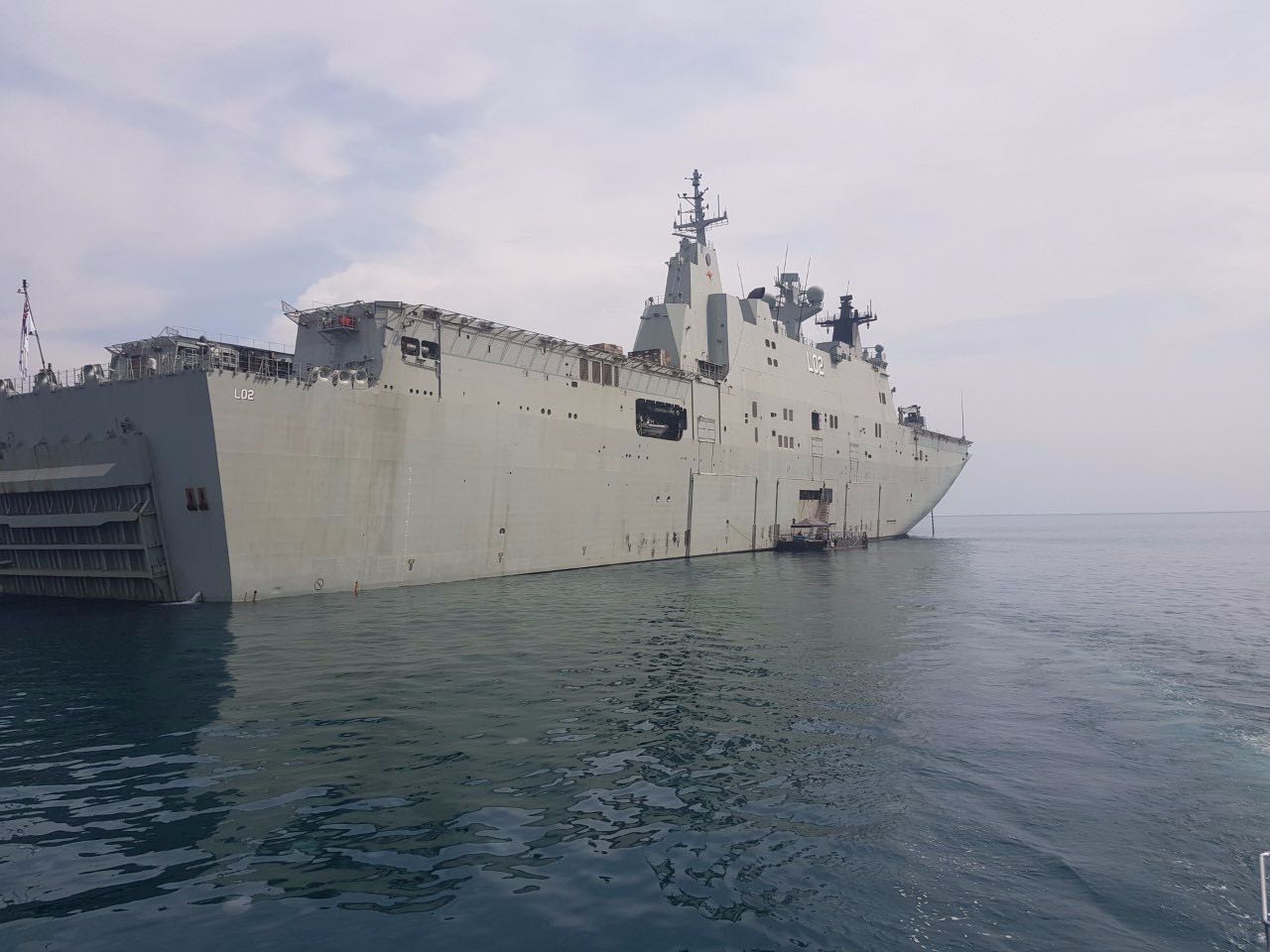 On a warm Malaysian morning in Port Klang, Dr Rebecca Strating stood alongside 200 officers for the Anzac Day dawn service aboard HMAS Canberra. The 230m long ship was on show as part of Australian Navy’s fleet of  Amphibious Assault Ships.

“We were invited to do the dawn service with the officers,” she told upstart. “They all got dressed up in their white, resplendent uniform, all ironed and immaculate. Imogen (a fellow academic) and I are just dressed in normal clothes and it’s 5:30 in the morning. We go out to the flight deck and it’s hot. It’s Malaysia- it’s really, really hot.”

Excluding a few side steps, they stood – arms by their side – completely still.

Strating and Graham eagerly joined the Australian Navy on the Indo-Pacific Endeavour (IPE).

The pair were two of the eight invitees to participate as academic ‘sea riders’ on the IPE 2019, to enable researchers and academics to see what Australia does on this activity. This was the first time academics had been allowed to join in on the expedition.

Strating is Director of the Bachelor of International Relations at La Trobe University and has recently been researching and teaching on maritime disputes in the Asia-Pacific.

Unlike the 358 crew members on board, she had never set foot on a naval ship before.

“When I was invited to spend six days on HMAS Canberra, I was very excited and nervous because I didn’t know what to expect life on a naval ship to be. But I can tell you I had an awesome time,” she said.

She travelled from Malaysia to Phuket, sailing a total of 23 hours over the six days she was on the boat.

One notable part of the ship for Strating was the use of space on HMAS Canberra– “one of the Navy’s most valuable assets”.

“They turn any space into a gym,” she said, reflecting on the copious amount of boxing bags in unexpected places. The use of old technology also astounded her, with the ship still using compasses and teaching astrology.

Commencing in 2017, this was the third IPE. Minister for Defence Industry Linda Reynolds launched the IPE mid-March this year and is pleased with the levels of engagement planned for the four departing ships over the next three months.

“These relationships are strengthened by annual exercises and engagements, such as the Indo-Pacific Endeavour series.”

One thousand Australian Defence Force (ADF) personnel boarded the four HMA ships Canberra, Success, Newcastle and Parramatta. They set out on a series of activities and military training exercises during visits to Malaysia, Sri Lanka and Thailand.

Dr Euan Graham is the Executive Director of La Trobe Asia, specialising in Asian security and international relations. He boarded Canberra on the return endeavour back to Australia, porting in Singapore and Vietnam. This was his second time on the ship.

“The first time, I was in home waters from Townsville down to Sydney, and that took five days,” Graham told upstart, comparing it to his three-day journey from Vietnam to Singapore.

Graham believes “you don’t need a history to know” why tensions have remained high between the USA and Vietnam since the Vietnam War. He noted the importance of Vietnam accepting Australian warships as well as other guests.

“I think it is really significant that a country like Vietnam is not just willing to take an Australian warship, but the other part of this exercise that was very interesting to me is that we had US Marines on board Canberra,” he said.

A small platoon-size contingent of US Marines from a detachment in Darwin joined the IPE.

“Seeing them walk around the shorefront in Nha Trang, in Vietnam, again you don’t need a history degree to understand the significance of having US Marines, for probably the first time in 50 years – on active deployment, on active duty – walking around, being welcomed,” he said.

“I think it was also interesting that it was an Australian warship that enabled that to happen.”

The quarter deck proved to be a much-needed place for Graham on the ship.

“This is a good place to gather the gossip, that’s the fun part of being on the ship, although we’re not part of the intelligence briefings we have roving remit to move around, ask questions, try and build up a picture from the different accounts that you hear,” he said.

“While Canberra feels more like a cruise ship than it is a warship, you don’t have many windows on board, so you start to feel a bit claustrophobic after a while, so getting out to the quarter deck, even if you don’t smoke, is your easiest way of getting fresh air.”

Despite having a love for the helicopters on board, Strating didn’t get the chance to fly in one, but Graham got the “next best thing” from a flight lieutenant.

“He turned on the engine. So, I sat in the cockpit and he taught me through it. It’s a good demonstration of the access that you received,” he said.

Hidden behind all the fun and games the academics enjoyed, were the training exercises the crew had to participate in.

“Although this [IPE] is a ‘we come in peace’ activity, what they were doing from point to point was also building up their basic skills,” he said.

Despite the incredible stature of Canberra, Graham did notice some drawbacks during his time on board.

“From the viewpoint of what Canberra is built to do as an amphibious assault ship, one of the big weaknesses is that they don’t have aircraft on board, despite that big ski ramp,” he said.

The IPE was drawn to a close on 28 May. Chief of Joint Operations, Air Marshal Mel Hupfeld complimented the ambition for regional engagement in the IPE 19.

“With four ships and various aircraft; more than 1,200 personnel from across the ADF, partner nations and defence industry; this was a landmark activity for our modern joint force,” she  told upstart.

Taylor Dawson is a second year Bachelor of Media and Communications (Journalism) student. You can follow her on twitter @tay_lordawson