Last week I read that The Daily Show’s Jon Stewart and Fox News pundit, Bill O’Reilly, were holding a 90 minute live-streaming political debate in the run-up to the November presidential election. 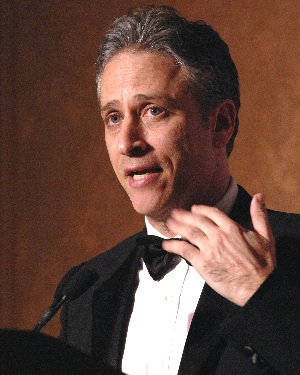 ‘It says a lot about O’Reilly that he’s willing to debate a comedian,’ I thought to myself.

A popular conservative commentator is happy to argue politics with a political satirist? I quickly realised that in O’Reilly’s mind he probably wasn’t lowering his own standards, but rather taking the opportunity to engage publicly with one of the most prominent liberals in the country.

Following the death of legendary newsman, Walter Cronkite, a Time Magazine poll found that Stewart was the most trusted newscaster in the country, beating the best cable news anchors the US had to offer. Similarly, in 2010 he was voted the most influential man in America, as part of a 500 thousand person online poll.

Such results describe an obvious breakdown in the relationship between news organisations and their target audiences.

But how reflective is this of the US media specifically, and are Australians in need of their own incarnation of Stewart?

Back in June Essential Research polling found that Australians with ‘some’ or ‘a lot’ of trust in daily newspapers had climbed since the end of last year, but was still sitting at a mere 52 per cent. Commercial television news and current affairs rose slightly to an unimpressive 46 per cent, while only 33 per cent place any trust in talkback.

By comparison, a September Gallup poll found that in the US 60 per cent of respondents said that they didn’t trust the mass media ‘very much’ or ‘at all’, which is the highest figure on Gallup’s records.

Distrust of media isn’t an uncommon phenomenon. While it is interesting, and perhaps surprising, to see figures in Australia slowly rising, they’re still unarguably low.

In an effort to find someone who we do trust on important issues, in a similar vein to Jon Stewart, I stumbled upon the Reader’s Digest Australia list of our most trusted people. I was a little surprised, and somewhat encouraged, to see Kerry O’Brien and George Negus at positions 36 and 43 respectively. It’s unsurprising that the likes of Geoffrey Rush and Cate Blanchett were listed higher, among scientists and doctors. But hey, at least a few journalists come to our minds when thinking of the people we trust.

Nonetheless, it’s clear that many people disapprove of the media in general, and are looking for trustworthy figures to provide quality information free from ideological spin and pandering to viewers.

Psychology Professor, Ronald E. Riggio, of Claremont McKenna College explains why we trust certain people, in the context of Jon Stewart and the wider news media:

‘Research in communication and psychology clearly shows that to be trusted a communicator has to be seen as knowledgeable and credible.

‘The fact that Stewart appears to have no vested interest (he’s not trying to gain supporters of a political agenda, merely amuse and entertain), makes him more trustworthy by comparison [to television news programs]’, he says.

So who, outside of the media establishment, do we have in Australia that fits these criteria? The Chaser guys do their best to highlight the sometimes ludicrous nature of Australian politics, but it’s all done in a purely tongue-in-cheek fashion.

Channel 10 program, The Project, has built a name on fusing the discussion of important issues with light-hearted comedic commentary, and has used trusted panellists like Dr Chris Brown and Dave ‘Hughesy’ Hughes to foster credibility and familiarity with audiences. Host Charley Pickering managed to place an impressive 46th on the aforementioned Reader’s Digest most trusted list, suggesting that many people have taken to the format as a credible yet entertaining source of information.

Perhaps Australia’s tradition of larrikinism might be a hindrance when compared to the sharp political jibes of Stewart and co., but it is also quite possible that our own situation is comparatively less destitute than in the US example.

When Stephen Colbert created his own Super PAC the results were hilarious, but it also highlighted how easily money is being used to influence the US political system; an important issue that he seemingly gave more attention than the mainstream news media, with its pervasive corporate interests and fears of alienating viewers on each side of the political divide.

It is worth noting that the same Essential Research poll that showed our media distrust also showed that trust in ABC television news and current affairs programming rose for the fourth time in succession to 74 per cent, with ABC radio rising to 69 per cent.

While the US has seen conservative politicians reduce their public service to a shadow of its former self, to a point where it is dwarfed by cable news stations, our Aunty (ABC) has managed to cover key issues of public importance, and hold our politicians accountable to a great degree.

So while it may be nice to have an intelligent and witty figure like Jon Stewart to look up to, it remains likely that he has become so trusted not only because of the issues he covers, but also because of the sorry state of the American television media.

Although it appears as though we have a long way to go in rebuilding our national trust in the media, hopefully Australia will never reach the point where we turn to comedians or other non-news personalities for our primary sources of information.

If the time comes, let’s hope we’ve found someone better than Hughesy.