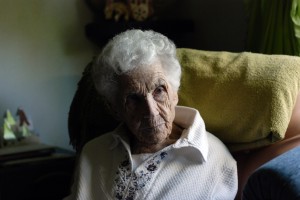 After a quick stop at Australia’s most famous landmark, Uluru, we head to Alice Springs in search of 87-year-old Molly Clark. This was an interesting turn in our travels, as we had all thought that at this point on our trip we would be spending more time sightseeing than running around in a town chasing a story. But, there we were …

Amongst other things, Molly was the founder of Alice Springs’ National Pioneer Women’s Hall of Fame, and this was the starting point in our search for the outback legend. In the often male-dominated outback it was important for Molly that women’s achievements were also recognised. And today, the Hall of Fame features more than 40 women from all walks of life.

Molly has spent most of her life at Old Andado station, an old cattle ranch 350 km south east of Alice Springs, on the edge of the Simpson Desert. During the last 30 years she was there, she lived by herself. When Molly’s declining health forced her to move to Alice Springs in 2006, she decided to still keep the old place open to travellers. She only asks a small donation from visitors – and that they visit the Pioneer Women’s Hall of Fame if they pass through Alice Springs. The place is kept intact by these donations and by working bees and a big annual outback party fittingly called ‘Molly’s Bash’.

In our conversation with Molly, it became apparent that the old phrase ‘home is where your heart is’, applies well to her situation. Molly’s heart is surely still at Old Andado. Were it up to her, she would still be living out there. But her family insisted it was time to move closer to modern conveniences and in the end, Molly complied.

Check out an image gallery from along the road in episode 4 here.

Part of the impetus for our trip was to explore the notion of community outside of the metropolitan areas of Australia. When we heard about Molly, I got very curious about her story, and about life on a geographically isolated homestead as a contrast to urban city life. What keeps people wanting to live in places where you have to drive for hours to see your nearest neighbour? Where you rarely have face-to-face contact with anyone

Much has been written about Molly. She is featured in at least three books and there have been a number of stories about her in the media. Still, I was very fascinated by this old lady, and felt privileged to be able to chat with someone whose background was so very different from my own. Judging by Molly’s replies, the distance between metropolitan and outback Australia is not only based on geography. Molly has few good things to say about city life. ‘It’s artificial’, she says. At the same time she’s not interested in glamorising life in the bush, because it’s ‘damned hard’. But it’s life. It’s her life, their life. It’s real life. Real, in the sense that you have to learn how to live it according to the environment you’re in, and having to learn how to survive in it. Life is a challenge, and challenge is what makes life a real life.

It’s that hardship that fuels the Australian national image to a great extent – at least that’s how it appears to me (I touched on this in a previous blog post). It’s that proud notion that men and women have overcome it, and are living the unliveable. But, of course, it’s only really a tiny percentage of the population who are living and creating this myth for the rest of society, who hear their stories and make them their own.

I have plenty of friends in Melbourne who regularly reflect on the harshness of the country they live in, but have never experienced the outback first hand. And, they’ve often told me quite frankly that they have absolutely no interest in going there either. But, no doubt the land itself – or at least the idea of it – was instrumental in shaping their character!

One friend remarked before we departed Melbourne: ‘Why the hell do you wanna drive through the desert? There’s just nothing-towns with nothing in between them. Nothing ever changes. It’s gonna be hot and miserable. I’d never go out there!’ This underscored with that peculiar sense of pride that he’s living in one of the harshest countries in the world.

I’m not going to dwell any longer on the notion of who and what made me and you, but isn’t it funny how, in the end, we are all products of our imagination?