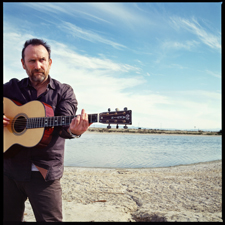 Colin Hay rose to fame in the 80s as the lead singer of Men at Work, an Australian rock band whose debut album Business as Usual reached number one in Australia, the UK and the US. Their songs Down Under, Who Can It Be Now? and Overkill are some of the best known produced in the country.

As a solo artist Hay has toured extensively and recorded eleven albums, including his recent release Gathering Mercury.

He talks to upstart co-editor Matt Smith about his music and touring.