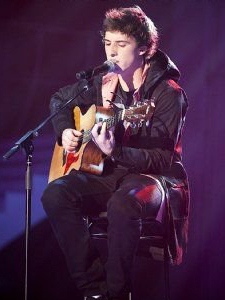 For most people, waking up each day to find hundreds of new Facebook friend requests would be nothing short of highly alarming, but for Taylor Henderson it’s just become part of his regular routine.

‘Keeping up with all the constant questioning and comments is very difficult because I want to reply to everyone, but I simply can’t,’ he says.

The 18 year-old from Geelong has experienced a meteoric rise to fame since he burst onto the music scene, when he went from playing guitar in his bedroom to performing in front of millions on national television as part of Channel Seven’s hit reality TV show Australia’s Got Talent.

‘It was such a head spin from being the average teenager, to being stopped constantly in the street for photos and autographs,’ he reflects.

Initially entering the competition as a guitar/singing duo with his father Cameron Henderson, he was told during their first audition that they were only allowed to continue to the next round if they became solo artists. Despite enjoying their performance and complimenting both singing styles, each of the judges felt that both voices were too different to work well together.

The move proved highly successful, and both Hendersons went far into the competition finals, with Cameron finishing runner-up and Taylor a close third.

Despite not winning the overall prize of $250,000, Taylor has very few regrets about going on the show, insisting that he is grateful for just being given the chance to perform.

‘Being able to have the confidence to perform in front of people, because before the show…my music was very hidden to people.’

‘I know I was always true to myself,’ he adds, ‘If I wasn’t the same person in the spotlight as I am off screen, that’s a regret I would always have. But I’m proud my honesty paid off.’

There was also a steep learning curve in dealing with the media, who latched onto his new found fame by ‘invading personal life and spreading it as far as they can’.

The biggest example of this was the controversy generated by the media about the Henderson’s church telling both Cameron and Taylor that they were to stop the music, or else they would be asked to leave. This created some of the most uncomfortable few weeks of Taylor’s life.

‘I think the way in which people can judge you in the first 5 seconds is very poor form,’ he says.
‘That was a very intimidating time for me, and affected me a lot. Instead of people referring to me as the guy who has a close bond with his dad, I was now seen as some church freak which really frustrated me because I’m not at all.’

‘I was told to leave my church which was already upsetting enough, but I didn’t need all of Australia knowing that. Even going to school was very embarrassing for a few weeks. The media handled it very poorly, they would rock up on our door steps, follow us around town. We literally were running from the media at one point.’

Despite this, Henderson insists that all of his experiences with the show have still been beneficial and has allowed him to ‘really mature as a person’.

In the year that has followed since the final of the show, his life has been ‘flat out’ with trying to balance performing at gigs all over Australia, spending time in the recording studio and finishing his final year of school.

He’s also firmly looking ahead to the future, with an impressive 75 gigs lined up for next year as well as the release of his debut album.

When asked whether he was concerned about falling off the radar and slipping away from the spotlight, Henderson acknowledges that the music industry isn’t all smooth sailing but maintains the belief that he has what it takes to succeed.

‘Time does move on, so once I returned back to school… I honestly worried about maintaining my reputation, as any artist would.’

‘It’s harsh how they can drop you off the face of the planet (at the end of the series), but whatever we do in life… anything takes hard work if you want to succeed.’

‘The way I see it, if I have fallen out of the spotlight, there’s only one person who can change that, and that’s me.’

Tom Midwood is a first-year student in the Bachelor of Sports Journalism at La Trobe University. You can read more of his work at his blog, or follow him on Twitter: @Tom_Midwood.