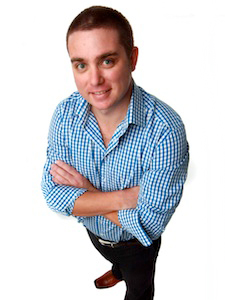 Simon King has an interesting job.

He isn’t your average sport journalist, who writes about local footy games. Instead he works for one of the biggest papers in the country, The Australian, where he writes a column about the weird and wacky incidents of the sports world that people often miss.

King says that he first wanted to become a journalist to satisfy his ‘natural curiosity of things’ and to ask the questions that ‘people weren’t asking’.

However it was always King’s goal to move into sports journalism, as he had developed a great ‘passion for the subject’ in his teens.

Born in England, King’s heritage becomes apparent through his love of cricket and football. But it’s the peculiar and ‘more obscure’ sports that he finds fascinating.

King is a fan of ‘lesser known sports’ like judo, ranking Ryoko Tamura’s gold medal win at the Sydney Olympics as one of the ‘most amazing things [he’s] seen’ in sport. ‘I also like badminton. There’s a stack of cock jokes, but that’s pretty amazing too.’

King was also present when Michael Johnson ran his last 400m race, stating that ‘anything at elite level pretty much rings my bell.’

Much like his own interest in sport, King’s column in the Weekend Australian, ‘A Week At A Time’, doesn’t always focus on mainstream sports.

Instead King writes about the funnier incidents in sport that have happened over the past week that the media may have glossed over; for example, the recent Communist Olympics held in China. ‘All the big ones,’ King jokes.

King also writes feature articles for the national daily, the most recent of which details his gruelling experience at Boot Camp.

However, it is the more personal anecdotes that King receives that make him laugh the most. ‘I genuinely believe that the funniest stories are the anecdotal ones that come from real people. Those are those are the ones I love. Although the Communist Olympics, let’s be honest, that was pretty amazing,’ laughs King.

Unlike many others in the media, King believes that newspapers as we know them today will stick around for a long time yet, despite more and more people relying on the internet for their news.

‘There are a lot of doomsday sayers out there saying it’s the end of print media, but I really don’t think so. Thanks to the internet there is now a whole myriad of ways to engage the reader. For instance, I ran a Twitter survey the other day, and I won’t be doing that again because the responses took hours to go through, but it shows that there are so many ways to interact with the reader that I think it’s a genuinely exciting time.’

‘If you’re a journalist with half an imagination, and you take the technology that’s available for a spin… you can pretty much get it right around the world, as I did with my Twitter survey. Again, the last time I’ll be doing that,’ explains King, half-seriously.

The Australian has proven itself to be right at the forefront and leading the way for newspapers when it comes to making most of the internet and technology.

In May last year The Australian was the first domestic paper to launch an iPad app, and it has recently become the first newspaper in Australia to trial a premium pay wall on their website. ‘I don’t feel comfortable taking my iPad down to the beach, but these are the options available to people,’ says King. ‘Exciting times mate, exciting times,’ he exclaims.

King believes the best way to get into the media industry ‘is to take every possible advantage you can get a hold of’, especially if that means doing volunteer work. ‘I started every job as a volunteer… and if you want to work for these organisations you need to get your foot in the door. Once you’ve got your foot in the door, value every opportunity,’ says King.

‘Someone once gave me this advice when I went for a job at the Australian Associated Press. The guy was an old chief-of-staff there and he said to me, “look Simon, just don’t f*** up”. I thought at the time that was particularly unhelpful, because what does it mean? But having worked for a little while you do see people who f*** up, and it’s the people who are not making the most of their opportunities.’

‘I look at the first generation of people I volunteered with at the Sydney Olympics, and they are now some of the leading sports writers in Australia, others are producers at Channel 10. They were all willing to go the extra yard and were rewarded accordingly. It’s all stepping stones.’

Paddy Naughtin is a first-year Bachelor of Journalism student at La Trobe University. You can follow him on Twitter: @PaddyNaughtin.