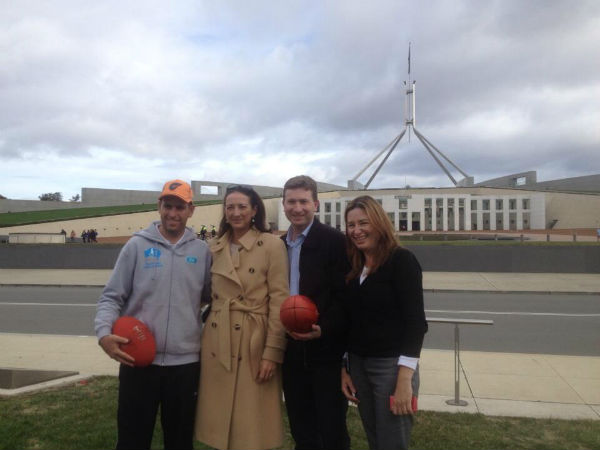 With the glory days of respectable combat appearing a foreign luxury in today’s parliament, can Australians get a true reflection of their government amidst the roar question time has become? As the desire to re-examine grows with the upcoming federal election, against the flash and snap of media and social commentary is there any hope to corral this lion’s den which current question time exudes?

According to opposition Senator Gary Humphries, this is exactly the problem with question time today. Parliament has forgotten its original purpose.  In playing to its theatrical aspect, Humphries points out when members such as Gai Brodtmann vow to remain solely “labor to [their] bootstraps” any ministerial claims they may have to representative government become distorted.

Hence the trap of ministerial debate.

Brodtmann insists in order to survive this lion’s den “you can’t have two different voices”. However this desperation to uphold party lines often means ignoring the personal motivations which saw ministers elected.

Confirming that no one side can claim absolute “purity” in this “contest of ideas”, October 2012 marked the beginning of Brodtmann’s campaign to reinstate “chivalry” into question time.

As the sole arena ministers can be regularly held accountable, not even the most effective parliamentary committee can compete what Humphries calls question time’s “thumping of chests”  when the six o’clock news airs.

“It’s behaviour and language that would not be tolerated in the classroom or the schoolyard, or any workplace, but it is seen […] as the signature of Parliament”, a prism Brodtmann fears now entraps Australians in dwindling hope for genuine representative government.

Great to welcome Matt Napier home to Canberra on his global poverty walk with @YvetteSBerry and @mickpilbrow pic.twitter.com/6ZY4i2kZE8

As Humphries reasserted, it’s not the throwing of “spears” which hurts, but the calculation. What appears the issue is not parliament’s combat to assert their position but the premeditated direction of their blow to ensure it.

Taking on a whole new meaning to “getting personal”, Brodtman stresses “I don’t mind combat but it’s the personal attacks which I found offensive and it will be the same for people who did not come from a traditional, combative environment”.

What’s a circus without a few fireworks? Driven by memories of her own call to Labor, Brodtmann fires a new canon for the future generations who will one day question what really matters for Australians.

Growing up under a working class matriarchy, Brodtmann learnt at eleven how the decisions of government define parameters for individual choice. At a time when many face considerable debacles of  character, now with a neuroscientist and a master of wine for sisters, Brodtmann claims her family are a testament of what can happen when those avenues are steered towards a future greater good.

“It’s a decision that you make. I’ve made that decision as a politician. I will get out there and be sharp on ideas any day.  But I will not engage in personal attack” stresses Brodtmann.

Dreaming of a return to the Menzies and Curtin days of chivalrous debate, Brodtmann asserts hopes for decent, public discourse do not have to remain a distant memory. As “debating 101” she believes it boils down to “the nature of the people involved”.

As part of the “Canberra furniture” who better to model the difficulty?

Married to ABC political journalist Chris Uhlmann, Brodtmann claims from the very start their relationship has been “discussed.” Together for over twenty years despite labels of being a “power couple”, Brodtmann stresses that the two maintain “very individual, strong moral compasses.”

All too familiar with the potency of media’s ripple effect, Brodtmann insists they have too much respect for their professions to engage in the “tsunami of bile and prejudice that plays out on talkback radio, email campaigns, Twitter and Facebook.”

This was demonstrated in 2010 when Uhlmann initiated contact with senior liberals, such as Tony Abbott, to determine if they were comfortable with Uhlmann maintaining his position given his relationship. But was this bold move after Brodtmann’s election strategic or a hope for what parliamentary conduct could become?

Call me an optimist, but while this tamer may not claim she “has the answers”, perhaps Brodtmann knows a little more on how to corral the roar of question time then she lets on.

Proving Brodtmann’s statement that “question time is not really representative of how the parliament generally works” combatant Humphries claims that despite how much they may argue  on a weekly radio program, their duel always ends over a coffee.

So, fair crack at the whip. How can voters look toward decent public debate when Brodtmann still argues when it comes to question time “I have to push Labor and the great things we’re doing. That’s my job”?

The answer claims Humphries is simple, education. Arguing that “women seem to expect to have to perform the same kind of aggressiveness that men have long mustered in that situation” it appears the issue is not ignorance but lack of exemplary conduct.

While both Brodtmann and Humphries agree there’s unlikely to be radical improvement before the election, as someone who believes to be proof of “what education does in transforming a life”, perhaps the smell of coffee can spark new hope in Australians.  As Brodtmann asserts with education lies “the opportunity to live a bold life and dream big.”

Who knows, perhaps if we fire up enough kettles, we can ignite the Canberra’s lion’s den once and for all.

Sarah Wallace is a third-year student at La Trobe University.