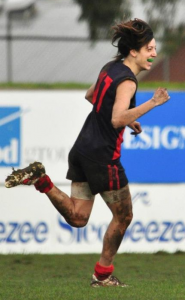 Blood leaks between Steph Chiocci’s fingers as she clutches her face in agony. A medic pries her hand away to reveal a swollen lopsided nose, freshly broken in a brutal contest for the ball. Biting her tongue against the pain, she allows her nose to be stuffed with gauze and temporarily taped into position. Minutes later, she is back on the footy field.

Football has broken Chiocci’s nose no less than three times over the years, and also fractured her scapula. With the words ‘Courage and resilience reveal my true strength’ inked down the side of her ribcage.

Vice-captain of the Diamond Creek Demons and a superstar of women’s Australian rules football, Chiocci booted 3 goals in the Creekers’ Premiership triumph against the Darebin Falcons last month. She has been selected to represent Victoria at every biannual State Carnival since commencing her playing career in 2006 and on each of these occasions she has been named in the All-Australian team.

Sitting in a busy suburban cafe, Chiocci is casually dressed in a hoodie and leggings. Her slim build, youthful face and cute haircut belie her reputation as one of the toughest players in the league. Cradling a glass of water, she off-handedly rattles off other achievements including club Best & Fairest in 2006 and runner-up league Best & Fairest in 2009.

‘Not much to tell. I’m pretty boring, really,’ she finishes. She apparently has a firm belief that she is no more special than anyone else despite her glittering football career. It’s a refreshing attitude, for such a dominant sports star to have.

This interview had been carefully scheduled around one of her brother’s footy final. Next day she had planned to go to a barbecue with friends to watch an AFL match. When questioned about interests outside of footy, she responds, ‘I’d like to try indoor footy!’

‘It’s all pretty much footy-related!’ she admits.

At 23, Chiocci is the eldest of four siblings in what she refers to as her “big Italian family!’ While she and her two brothers play footy, her little sister is into dancing, despite Chiocci’s attempts to induct her into the family tradition.

‘She’d be good at footy and I’ve tried, but no, she’s a dancer,’ Chiocci concedes.

‘I’ve been a member since I was 2 years old,’ Chiocci says.

She is living with her family and working part-time as a receptionist at a physiotherapy clinic while she is studying at RMIT University to be a PE teacher (yes, that will also involve a certain amount of footy).

‘I love teaching and actually don’t mind studying, believe it or not,’  she says.

‘But I try not to open any books or do any study on the weekend.’

So does she go out and party much?

‘Not really. A lot of the footy girls live together so if anything I’ll spend time at their houses just relaxing. If we go out it’s just to bars, not clubs or anything. But when we go out, we have fun. I don’t mind a dance,’  she smiles wryly.

Despite matches being held on Sundays, Chiocci never drinks the night before. She has developed a breakfast ritual of poached eggs on toast the morning of each match. She doesn’t drink soft drinks and can’t get by without her water bottle.

‘I drink water. I carry a bottle with me, everyone calls it my best friend,’ she laughs.

‘I’ve got it in the car, I was actually going to bring it in but I thought that would be weird. I’m attached to it!’

Chiocci has participated in the AFL’s High Performance Academy held in Melbourne for those selected in the All-Australian team. The program includes skill drills, kicking analysis, leadership clinics and sessions on nutrition and hydration. It is described on the AFL’s website as ‘the pinnacle for an elite female footballer in Australia.’

Next year Chiocci will play her eighth season, and doesn’t plan on retiring anytime soon.

Hopefully I’m still around when the national league comes about in 2020. I’ll be old by then!’  she says.

‘But it depends how the body holds up. It’s been pretty good so far. Apart from the broken nose and the arm!’

In looking forward to the future Chiocci also looks back with gratitude to the efforts of past players who have made the women’s league into the success it is today.

‘I’m really lucky, I came into the game when it already had all the foundations started and was going places. There’s been so many opportunities for me because of what people had done already,’  she says.

Chiocci once posted a tweet about her upcoming weekend, “Footy, footy and more footy, can’t wait!’  and that pretty much sums it up for a woman who doesn’t just love footy but truly lives footy.

Robyn Antanovskii is a journalist, archaeologist and yoga instructor. Follow her on Twitter @robynant and read more of her work at robynant.blogspot.com.au