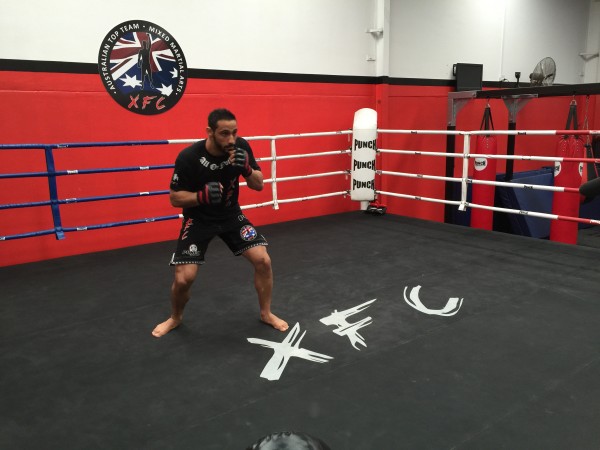 In between training to defend his belt, the Light Heavyweight Champion has become a professional boxer.

Popularity of MMA is rapidly rising in Australia. An increasing number of people are beginning to understand the sport since the Victorian ban on cage fighting was removed earlier this year.

The sport is a concoction of numerous disciplines, including Brazilian ju-jitsu, boxing, Vale Tudo, Muay Thai, kickboxing and wrestling.

To be a champion, a Mixed Martial Artist needs to excel in all categories.

Abdallah has done just that.

His love for MMA began at age 15, when his older brother, Haysem, who is now the Australian champion, began kickboxing.

Abdallah focused on his groundwork, as kickboxing was his brother’s forte. However, his strongest component is his striking.

He has won his last four fights in 30 seconds due to a knockout, but says you can’t just rely on your striking ability.

“People find it really shocking that I’ve got a lot of a ground game. I haven’t used it a lot in my fights because of my KO power. When the fight gets to the ground, I’ll be able to handle myself,” he tells upstart.

“The next bet was just to prove that [I] could box as well.”

The training for both sports is similar, however, groundwork training is not necessary for boxing.

“A sprawl and an armbar aren’t going to help me too much in a boxing fight. All the conditioning and the sparring is all pretty much the same,” he says.

He says it’s vital to protect yourself against your challenger at all times.

“In boxing, I know [my opponent] has two tools, his left hand and his right hand and he’s going to try and hit my chin or my body. I know they’re the only two things that are coming so I can let loose a little more with my striking in a boxing fight,” he says.

“In MMA, if I’m striking him, I’ve got my elbows to worry about as well as my knees and my kicks, and if he’s trying to get the takedown, I can’t rush and overwhelm him where he just comes in for a shot and then I’ve just lost my advantage.”

With a proud Lebanese heritage, Abdallah says that his family plays an important role in every aspect of his life.

Between the two brothers, they have fought 27 fights without losing.

Abdallah says his father attends every fight. His mother doesn’t like to watch, but still supports him.

“What [sort of] mum wants their kid going in [the ring] when ultimately, there’s someone across the other side who wants to take them out?” he says.

After training in the U.S at a camp in Vegas, Abdallah is on the radar of the Ultimate Fighting Championships (UFC) — a world-class stage for the best-of-the-best in MMA.

He has been training alongside Roy “Big Country” Nelson, Josh “The Warmaster” Barnett, Ray “Sugarfoot” Sefo and Blagoi Ivanov.

For any MMA sportsperson, the UFC is goal.

Abdallah says it’s a matter of time before he’s selected for a UFC fight card.

“I train for the fight, whereas some people fight because they train hard. I love the fight. I love the competition.”

“Everyone says they want to stand and [punch], but the fact is when someone tries to stand and bang with me, they usually end up on the canvas,” he says.

However, Ray said he sees himself winning in every aspect, in what he’s described as the fight of his life.

“His advantage, on paper, is the ground. But that’s only because no one has ever been able to take me to the ground where I can actually show off my groundwork,” Abdallah says.

“This is the strongest, fittest and leanest I’ve ever been. I’m looking forward to putting on another show.”

The Australian Fighting Championships’ 14th installment is this Saturday night at the Melbourne Pavilion.