Kennett returns to the role despite questions over his ability to serve another term as club president. 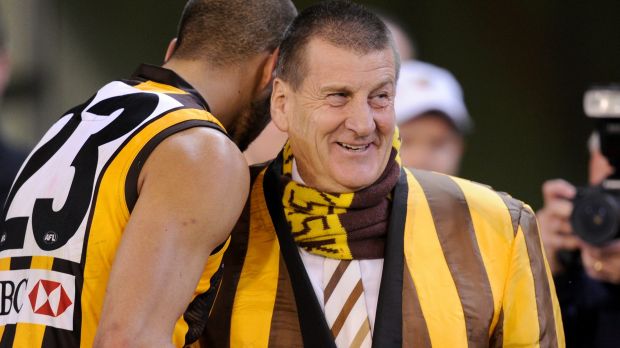 Jeff Kennett has been reappointed as Hawthorn president, seven years after he stepped down from the role.

The former Victorian premier served as president from 2005 until the end of 2011, and along with coach Alastair Clarkson, took the Hawks to a premiership in 2008.

A statement released by the club said: “The board of the Hawthorn Football Club met early this morning where the president, Richard Garvey, indicated that he was resigning as president of the club accepting responsibility for a recent board decision.”

Garvey’s resignation, which came less than 12 months into his three-year term, was due to his ill-fated appointment of CEO Tracey Gaudry, who only lasted five months in the role.

He will continue at the club as a director.

Kennett’s return to the Hawks will see the renewal of one of football’s most explosive president-coach relationships.

He once threatened to drop Clarkson to the VFL, following a series of losses early in the 2010 season.

“I am not going to change my story now … I have always said to Clarko that he should go after 10 years,” Kennett told the Herald Sun.

“Clarko’s contract may be extended, he may not wish it to be extended, but we have got him for two more years.”

The four-time premiership coach is contracted to the Hawks until the end of the 2019 season.

Kennett is humbled to be back at Hawthorn but quickly established that maintaining a winning culture is the ultimate priority for the club.

Thank you all for your generous and kind words. But remember teams deliver not individuals.go Hawks

The club sought independent legal opinion over whether Kennett could be reappointed, given he has already served the two-term maximum of six years.

Kennett, who was the driving force behind the two-term presidency decision, was cleared to return to the role, as the limit only applied for consecutive terms.

“The board ratified that former president Jeff Kennett assume the presidency subject to a members’ vote at the AGM in December, which has been accepted,” the statement said.

Despite the limitations Kennett placed on presidents to serve two-terms, he concedes that it is difficult to walk away from the club in need of leadership.

“When you’re asked to do a job for an organisation with whom you’re so attached, it’s hard to say no.”

The shock return follows a period of major change at the Hawks over the past 18 months, with former president Andrew Newbold handing the role over to Garvey and chief executive Stuart Fox moved to a CEO role at the Melbourne Cricket Club.

Football director Chris Fagan assumed the role of coach at the Brisbane Lions.

Clarkson is the only key club leader remaining from their 2013-15 premiership three-peat.

The presidency was cleared to be taken up immediately, with the transfer of authority commencing Monday 9 October 2017.