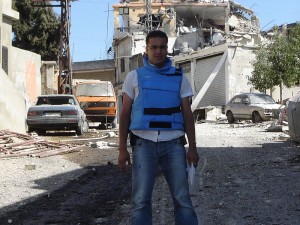 It has been said that the golden days of journalism are gone and with it the level of unspoken neutrality that journalists used to hold in war zones. Journalists are now becoming targets because they are journalists.

The deaths of Marie Colvin and Remi Ochlik in Syria earlier this year have brought this issue once more into the international media. There is speculation that the deaths of these two journalists were not accidental.

In recent times, several international organisations, established with the purpose of monitoring journalists worldwide, have reported an increase in media deaths. The nature of warfare has for the most part changed from the conventional opposing sides to a much more murky and ideological situation, where the sides are often blurred.

It follows that reporting on these conflicts has changed as well. Journalists have increasingly become distinct targets by many different factions.

This change, reports author Phillip Knightly, began in Vietnam but increased dramatically during the 1990s with the Bosnian wars. Here, he noted, identifying yourself as a journalist actually drew fire.

The Committee to Protect Journalists (CPJ) has reported that since 1992, 926 journalists have been killed. While many journalists reporting in conflict zones become accidentally caught in cross fire, 647 of the total number have been murdered intentionally, both in conflict zones and at home. In the majority of these cases, no one has been found guilty of these murders. It must be said that most of these murders occurred on the journalist’s home ground with Iraq, Philippines, Algeria and Colombia; some of the deadliest countries in which to be a journalist.

So far this year, 31 journalists have been killed, according to the CPJ, 15 of which are listed as murdered and 13 of the total number killed in Syria.

A report titled ‘Iraq War: A Heavy death Toll for the Media’ by international organisation Reporters without Borders, claims that between 2003 and 2010 around 230 journalists and media personnel were killed reporting on the Iraq war. The Iraq war was also ‘the world’s biggest market for hostages’ with 93 media personnel taken hostage, 43 of which were later executed. At the time of this report, 14 people were still missing.

The hostility towards media professionals did not just come from the factions warring with the government and allied troops. American troops were responsible for the bombing of the Palestine Hotel, a known base for global media professionals, in which two journalists were killed. Over 30 Iraqi journalists were arrested by the U.S Army. According to Reporters without Borders, Camp Bucca, an American detention centre became the largest prison for journalists in the Middle East.

Concern for the large numbers of journalists dying in the line of duty led to the creation of the International News Safety Institute (INSI), who developed information on programs and practices to increase the safety of journalists in the field. This initiative has been supported by many large media organisations including CNN, BBC, Reuters and Al-Jazeera, as well as international groups such as CPJ, Reporters without Borders and The Institute for War and Peace Reporting.

There is a limit to how much protection a journalist can receive in a hostile environment without impeding their ability to report. The increasing death toll hasn’t stopped journalists yet. As Knightly points out, the six British journalists who reported on WW1 were very well protected and while none were killed, the quality of reporting left much to be desired. This can be compared in a way to the increased pressure by the military for embedded journalists in war or conflict zones.

The system can be safer for journalists for the most part but it also can lead to warped and distorted versions of the conflict in which an increased home ground military perspective is the focus. This was the case in many ways for the reporting on the Iraq and Afghanistan wars.

‘Despite the risks and threats, journalists will continue to do what they need to do to bring the news from war zones,’ says Trisha Stratford, an ex-war correspondent, who reported on the conflicts in Bosnia and Somalia.

‘As a war correspondent I was concerned about possible dire consequences but that is pushed to the back of your mind as you are driven by the desire to tell the story. This is why you are there and you are in a theatre of non-stop stories presenting themselves so there is not time to be concerned about your safety.’

When considering the idea of journalists being targeted in war zones, she says: ‘I suppose in a sense you are driven by irrational optimism that you will not be targeted. My experience of being targeted is that once the UN, as a peacekeeping force leave, journalists then become the target. I was certainly targeted and shot at in Somalia as the UN were leaving. Bosnia was another story. Bosnia was certainly the most dangerous war for a journalist. Everyone was a target there and I was under fire many times.’

While the reports indicate that the death toll for journalists is on the rise, to date it hasn’t prevented journalists from doing their jobs – reporting the news.