The modern headquarters of The Age has become a new Melbourne landmark, strikingly visible opposite Southern Cross Station in the CBD. Yesterday, the building towered over a windswept group of protestors, who gathered to voice their disagreement with Fairfax Media’s decision to outsource subediting. 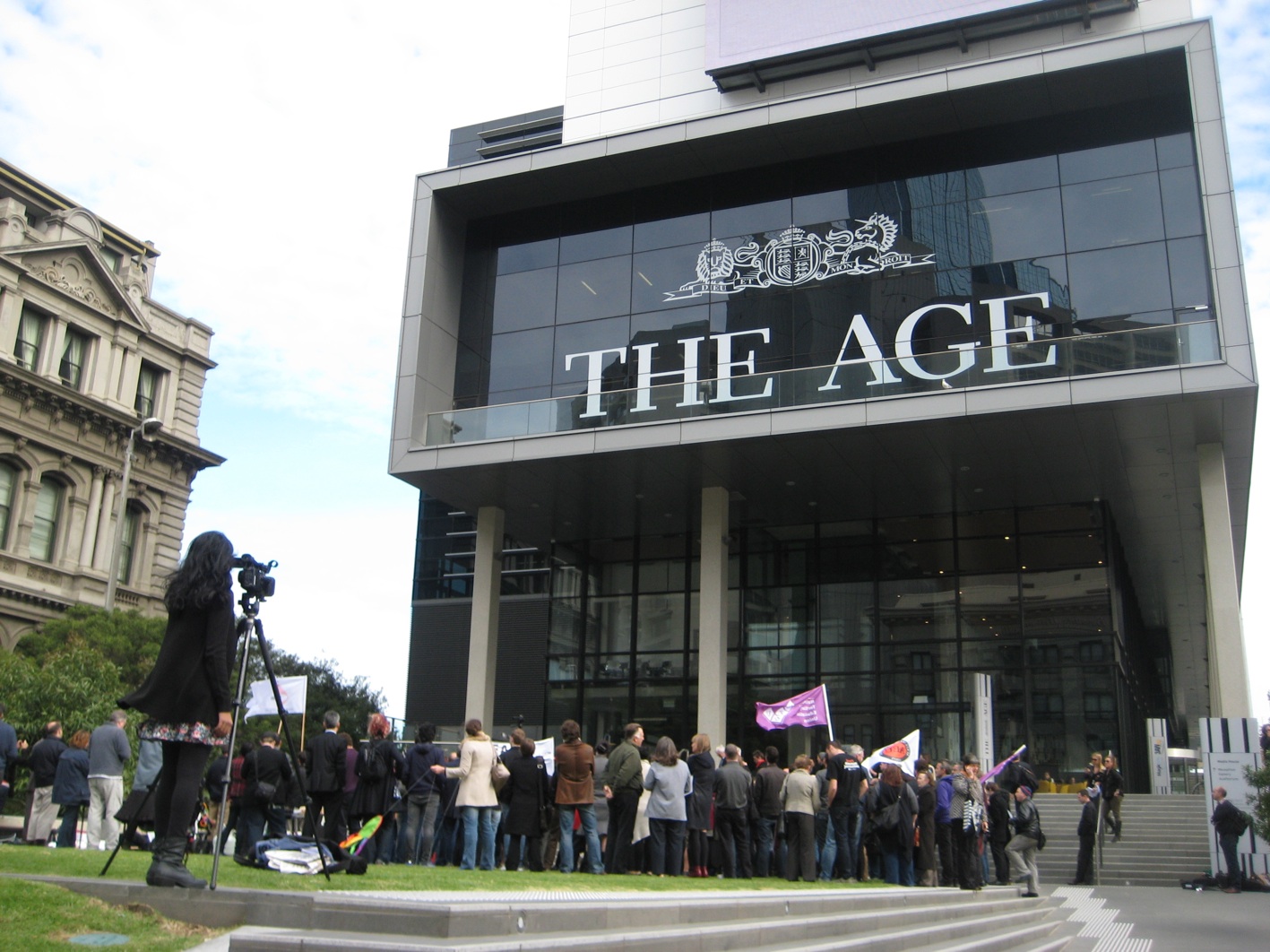 Journalists rally outside The Age building.

The decision, made on 12 May, will see subediting services for both The Age and Sydney Morning Herald outsourced to Pagemasters. The move is expected to result in 82 redundancies across the two mastheads.

I turned up at the rally a little after midday yesterday, armed with curiosity at both a journalistic and a personal level. As a journalism student, my personal curiosity was partly a matter of trying to understand what sort of media world I will graduate into, but also reflective of my broader concerns about the integrity and quality of Australian media.

Mr Cain spoke about the importance of The Age to him as an avid newspaper reader and indicated that he saw the outsourcing of subeditors as a threat to the integrity of Fairfax.

‘We are going to be poorer in the long run, as a polity,’ Mr Cain said.

He also said that newspapers influence people far more than any politician.

As a primary medium by which politicians communicate with their voters, he certainly has a point. His comments are timely given the current debate about the role of the media in a robust democracy.

Members of The Age Independence Committee also fronted the rally as a group. The Committee was established in 1988 during a successful campaign against British tycoon Robert Maxwell’s attempt to take over The Age. 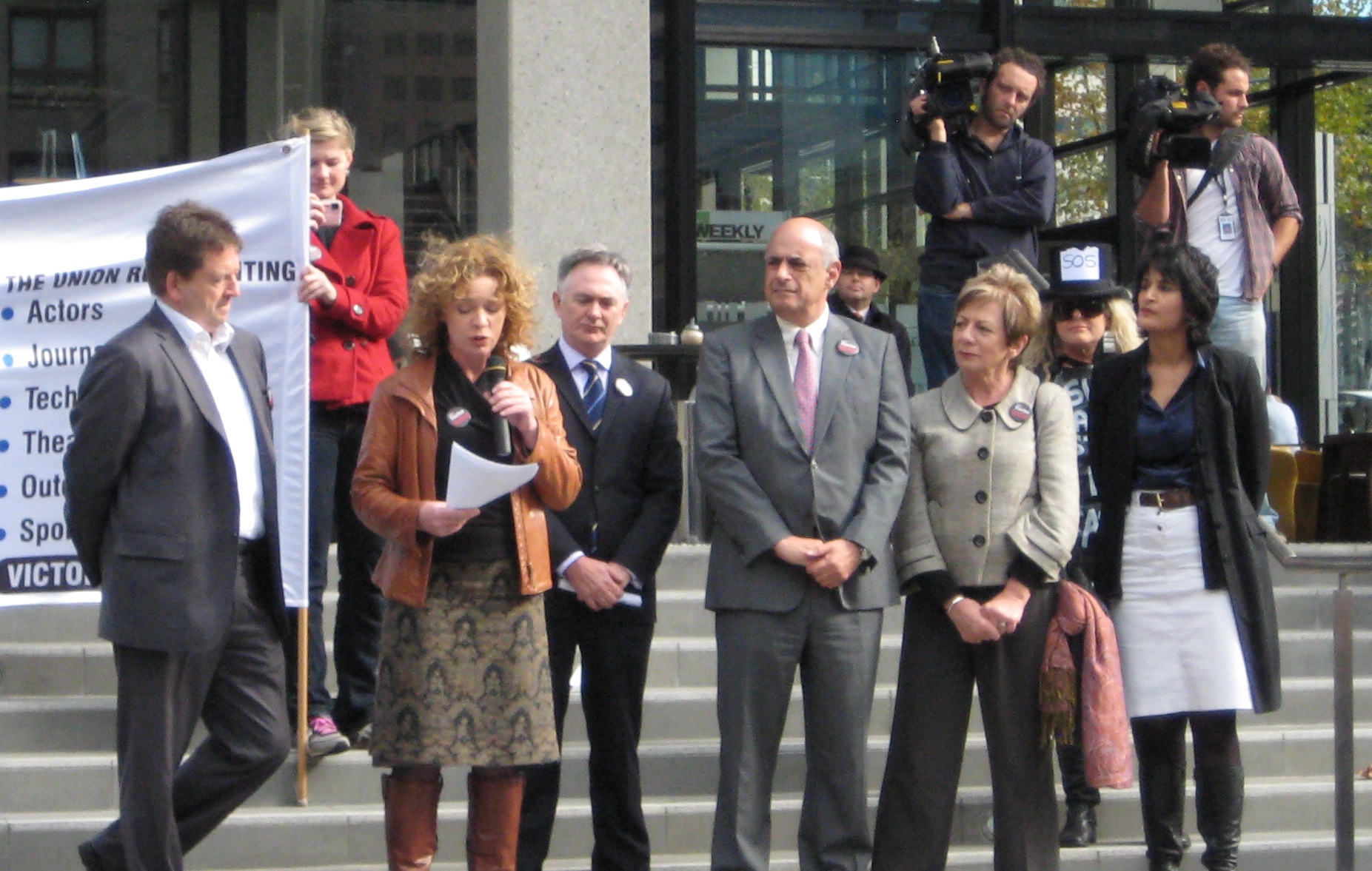 Members of The Age Independence Committee, including Jo Chandler (second from left).

Ms Chandler told the rally that throughout her long career at The Age, she has always been able to operate according to ‘journalistic principles’, and expressed her concern that the outsourcing of subeditors would undermine this.

‘We are concerned about the leeching of editorial control,’ she said.

The history of The Age Independence Committee is illuminating of the seemingly ongoing fight of journalists at the masthead to resist commercial pressures.

It’s a fight that is easily taken for granted – The Age yesterday looked much the same as it always does, in spite of the battle currently underway between journalists and Fairfax management.

The Media Entertainment and Arts Alliance (MEAA) has been at the forefront of the campaign against the changes, and the rally in Melbourne yesterday was paralleled by a similar one in Sydney.

MEAA’s campaign has been ongoing since Fairfax CEO Greg Hywood flagged the intended changes on 3 May. In spite of this, the decision to go ahead with the move was confirmed by Mr Hywood on 12 May, in an email sent to staff and reported in The Australian.

Mr Hywood’s email took several paragraphs to get to the point, acknowledging staff submissions regarding the proposal before stating that the staff plan ‘did not ultimately meet the strategic and commercial intent of the original proposal.’

The section of the email titled ‘Re-investment in quality journalism’ strikes an odd note. At a surface level it may bode well for emerging journalists like myself, with the trainee program being expanded in 2012, but it seems to neglect the worth of a subeditor to ‘quality journalism’.

As Mic Looby pointed out on The Drum, good sub-editing is ‘only noticed when it’s not there.’

There’s little doubt that staff at The Age expect the quality of the newspaper to decline if subediting is outsourced.

Pagemasters, a subsidiary of Australian Associated Press, states on its website: ‘Much of our recent success lies in the pioneering establishment and operation of centralised subediting centres.’

Australian print media is already dominated by two major media organisations, and thus the variety of mainstream media available is narrow. Moves towards further centralisation within these organisations suggests to me an inevitable loss of character between the individual publications.

The fact that the same article about yesterday’s rally was reproduced on websites for The Age and Sydney Morning Herald is an example of this.

There’s no doubt that print media organisations will face some tough times over the next decade, but getting rid of those who write the headlines is not the best way of stepping up to the challenge.

Suzannah Marshall Macbeth is a Master of Global Communications student at La Trobe University and a member of the upstart editorial team. All photographs are by the author.