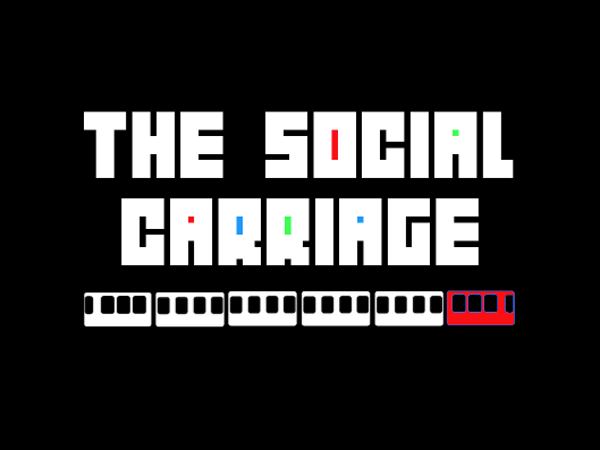 Two 19-year-old RMIT students have set out to change the environment in which we use public transport, with a Facebook campaign called ‘The Social Carriage‘.

The Social Carriage is the last train carriage of any train, that people are being encouraged to take if they would like to choose a more friendly, social option whilst on public transport.

Thomas Lubberink and Mitch Lawless were out to lunch one day and started a Facebook group called ‘The Social Carriage’ on a whim.

Business management student, Mitch Lawless tells upstart their idea came up in conversation when they expressed their wish for people to be more sociable on trains over lunch.

Lawless says the motivation behind their idea was a simple statement following a moment in which his co-founder Thomas Lubberink described his disdain for how boring trains were.

“Why don’t we just make a Facebook page about it and see if anybody else is keen?”

What then followed this suggestion has seen the Facebook group grow to more than 6,000 members within a few weeks. 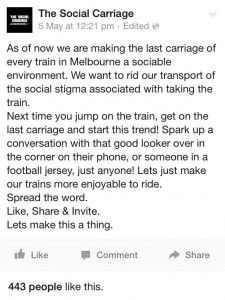 “We were pretty surprised about it,” Lawless explains.

The students’ vision behind the campaign comes from a desire to break social barriers, and create a platform for people wanting to make friends.

“What we envision ‘The Social Carriage’ to be, is a social convention in which people who choose  to socialise on trains, know that they can just jump on the last carriage and know that there will be people on board willing have a chat,” Lawless says.

However Lawless didn’t expect it to flourish as quickly as it did on Facebook.

“I don’t really know why it propelled so quickly, all we did was tell heaps of people at uni, and invited some friends to like our page,” he admits.

When asked if he has travelled on The Social Carriage, Lawless reveals that it was easier for him to travel and speak to people because he used explaining the idea to fellow commuters.

“I started off explaining to the people I spoke to what The Social Carriage was, what it meant, and from there, the conversation came really easily because I had a purpose for talking to them,” he says.

A downside to the campaign is that not every stranger approached will want to have a conversation whilst travelling.

“Some people I have talked to have said it’s worked for them, and some have said it hasn’t, and I understand that… for it to take off [we would need] at least one hundred thousand [more likes on Facebook],” he says.

Safety concerns have risen concerning the students’ campaign since its beginning, but Lawless assures their intentions are completely pure.

“I understand that some people would see it as a threatening environment, but our goal is to make it a positive environment so we can get rid of any negative connotations or safety issues associated with The Social Carriage,” he says.

Lawless’ advice for shy travellers is to let the confident people lead by example.

“Just have fun with it, and go out on a whim. Most people are nice people, and won’t shy away if someone approaches them, and if they do, just walk away,” he says.