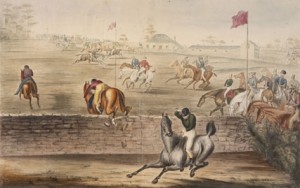 Growing up as a young, horse obsessed girl in the South-West Victorian town of Warrnambool, one of the highlights of my youth was standing beside an enormous, unyielding steeple on the first Thursday in May: Grand Annual Day.

At 5500 metres, The Warrnambool Grand Annual Steeplechase is the longest race in the world. With 33 jumps, it also has more obstacles than any other steeplechase.

On Grand Annual Day, half the town would head down to the Warrnambool Racecourse to huddle around the jumps and hug the barriers. Wrapped up in fleecy jackets and knitted hats, reverently clutching at sweeps stakes ticket stubs, we would wait. Then, suddenly they would come thundering around the corner, shaking the ground, kicking up mud and grass, before launching themselves into the air, holding us entranced and captivated.

Their stories of triumph and victory became our sacred narratives, enshrined in mythology and country town pride.

Yet, even from that young age, I always felt an inherent terror that a horse might fall; that a life, human or equine could be lost. When it happened, it was tragic and traumatic; a blight on our town’s proudest day of the year.

Never once though, did that fear prompt me to question the legitimacy of jumps racing. First run in 1872, The Grand Annual was firmly entrenched in local culture and tradition, bringing tourism and money to Warrnambool, and placing it firmly outside the realm of question or criticism.

When my parents purchased a former Grand Annual starter by the name of Rowdy Ralph for my sister and I to take to Pony Club, I sat in my school’s library at lunchtime for a week, diligently scouring the sports section of every edition of the town’s local newspaper for any mention of my new pride and joy. The full page article I found featuring a large colour photograph of Ralphy and his former trainer hangs proudly on the wall of my family’s home to this day.

Ralphy had back problems and tendon damage in his legs from his years of jumps racing, yet never for a second did I consider that his battle scars were the result of cruelty.

Today however, public sentiment has shifted, and jumps racing is widely disdained and scorned by animal welfare groups and growing numbers of the public. The campaigns of anti-jumps racing by activism organisations continue to gain momentum and popularity. Jumps racing has consequently been phased out of all Australian states except Victoria and South Australia.

The sport clings desperately to its former glory in small communities like Warrnambool, where it has long been a vital cornerstone of tourism, local tradition, and cultural identity. Tellingly, jumps racing supporter Nick Tedeschi lamented that jumps racing  ‘is accepted but rarely embraced.’ Only strongholds like Warrnambool and Oakbank clutch the game with genuine love and affection.’

Yet, it seems unlikely that even ‘strongholds’ like Warrnambool will be able to protect the longevity of jumps racing indefinitely. The 2011 Grand Annual can only be described as a public relations disaster for the sport, after the riderless Banna Strand leapt a 2 metre barrier, crashing into a crowd of around 100 spectators, causing chaos and injury. Seven people were taken to hospital and only two horses finished the race, after six lost their riders.

The RSPCA consequently called on the government to bring an end to jumps racing, labelling Warrnambool Racecourse, ‘the killing fields for horses.’ However, Victorian Premier Ted Baillieu stood by the sport. Yet how many more incidents of this nature can jumps racing survive before the public has enough, and we see a backlash and campaign strong enough to finally bring the sport to its knees?

These are horrifying statistics, though perhaps not all together surprising when one considers the nature of jumps racing. Jumps races tend to be much longer than flat races, and the jockeys are often heavier. Throw fatigued horses and metre high jumps into the mix and you’ve got a recipe for disaster.

Jumps racing supporters say the sport provides horses too old or unsuccessful to continue to compete in flat races with a second chance. Racehorses are notoriously difficult to re-home due to their flighty, high strung natures: finding them a home with the kids from the local Pony Club is often not possible. It is a sad and uncomfortable truth that were it not for jumps racing, many of these slow, aging racehorses, now useless to the industry, would be destroyed.

Former jumps jockey Les Thompson recently told the 7.30 Report, ‘I sympathise with these people that say a horse got killed. Yes, he did get killed, but he saved 10 others, because [without] jumping races these horses will go to a knackery and [be] killed.’

But, can the ends ever truly justify the means? How long can we continue to perpetuate cruelty and suffering in the name of culture and tradition?  Eleven jumps horses died last year as a result of injuries suffered while racing, three of these at Warrnambool. Three have died this year. The fact that the flat racing industry has such a high turnover of horses that another industry must exist simply to take on its refugees is surely an issue that requires closer scrutiny. We can no longer palm these horses off to the jumps racing industry and say ‘good enough.’